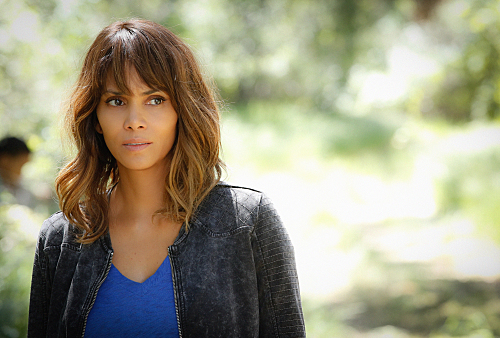 Tonight on CBS Steven Spielberg’s Extant starring Halle Berry returns with an all new Wednesday August 5, Season 2 episode 6 called, “You Say You Want an Evolution; The Other.” We’ve got your recap down below! On tonight’s episode Molly [Halle Berry] starts changing physically, but isn’t sure of the result or if she can reverse it, which sends her into a panic. Also, JD’s [Jeffrey Dean Morgan] ex-wife reappears to discuss their daughter. Later, Molly  and JD hope for peace and try to get Shepherd [David Morrissey] to broker a deal between humans and hybrids, while Lucy [Kiersey Clemons] tries to manipulate Charlie’s [Tyler Hilton] feelings to put him in a compromising position.

On the last episode Molly tried creating a virus to destroy alien hybrids and discovered that aliens were trying to communicate with humans through a hidden message in their DNA. Elsewhere, Lucy helped Ethan run away from Charlie to help him recover memories of Molly. Did you watch the last episode? If you missed it we have a full and detailed recap, right here for you.

On tonight’s episode per the CBS synopsis “Molly panics when she discovers she is changing physically – the question is into what, and whether she can reverse what’s happening to her. Also, JD’s ex-wife, Dorothy (Melina Kanakaredes), shows up suddenly on his doorstep to discuss their daughter. Kanakaredes guest stars as Dorothy, the ex-wife of JD Richter, a tightly wound, by-the-book circuit court judge.”

Molly is sick but on tonight’s two part episode of “Extant” she finally figured out what was wrong. And that there might not be cure for what she has.

Molly had used hybrid’s talent for mental manipulation last week to almost kill a man that was harassing her at the time. And so she later used that experience as a starting point. Then came up with conclusion about her “condition” could really mean.

And while many of us are not going to like this, it seems that Molly was given some of her son’s DNA back when she was pregnant. So currently she’s not fully human. Though she’s not actually a hybrid either. In fact she’s something in-between.

As in Molly still has her human cells because her son’s cells haven’t reproduced to the point yet of full altering her DNA. And that’s what has been messing with Molly’s head lately. Where she gets to hearing voices that no one else does and is hyper-sexual.

In other words, Molly is still a hot mess.

And unfortunately she’s run into even more problems than she can handle. After Molly had finished testing herself, she returned to GSC to help the virus team who recently had a breakthrough thanks to her work there a while back.

But, it was as she was there, that Lucy was left confused when she tried to read Molly’s body temperature and could only get “inconclusive”. So for all Lucy knows – Molly could be dangerous. And also a possibly threat to Ethan.

Yet Lucy didn’t say anything to her superiors. As you can recall, she’s grown a bit secretive since she was accidentally given free will. And rather than report someone like Molly, Lucy oddly told Ethan that he should insist on seeing Molly despite his mom telling him that she was sick.

Molly, you see, realized that she couldn’t be Ethan’s mother until she was able to find a way to isolate her son’s DNA in herself. And return to some form of normalcy. However Lucy doesn’t appear to care about any of the Humans’ best interest.

She told Ethan that Humans lie all the time. And that his latest gift was a way to keep him from remembering how much Julie had lied to him. So it looks like Lucy is playing her own game that she won’t reveal till she has everything that she wants.

And the new Humanics that are about to flood the market just might play a part in that as well.

GSC has congratulated Lucy on her first hybrid kill and, because they feel like she acted well under pressure, they’re now going full steam ahead in manufacturing at least a hundred more Humanics. And, well, the only that can happen if Julie were to put a rush on it all and ignore the safety protocols that John had originally put in place.

John if you remember, wanted Humanics to be grow and learn as any other child in a loving home would. So he didn’t focus on making them stronger or faster. Or for that matter making so many of them in a short time span.

John knew that such thing would be dangerous. And he was right. Lucy has gotten into Ethan’s head and Ethen then went on to create a bunch of spybots that he now considers family. But Lucy realized they could use these “siblings” to monitor the humans while they were offline.

Meanwhile Molly has finally broken away from GSC.

She went into the lab and stole back her research before going rogue. After all Molly still needed a cure for herself and she knew what would happened to her if the GSC ever found out about her wonky DNA. So Molly caused a scene back at headquarters and then meet up with JD to go find her son.

Apparently, what Molly needed on top of her research was her son’s DNA so that she could isolate only his genes. And JD tried to warn her from following such a risky plan but Molly ultimately talked him into going with her.

And when Molly did see her son again, something weird happened. Something JD couldn’t even prevent no matter how much he warned Molly.

He somehow talked Molly into believing his people are peaceful. That if they’re planet hadn’t been dying, then the spores wouldn’t have been sent out to go looking for a host. But what really sold Molly on the idea of coexistence was that the hybrids weren’t killing women anymore.

It seems they evolved. And now they don’t kill women in the process of a hybrid birth anymore. Which is actually true with a woman that had earlier come into GSC confirming the story. Apparently that woman wanted to report her own strange pregnancy and the son that resulted from it.

So humans technically aren’t dying anymore and when the hybrids asked for Molly’s help – all she could see was women and children. Who, when you think about it, are all of her descendants. And that could be why Molly chose to be their advocate.

But Molly honestly thought she could talk Tobias into holding a meeting with her son.

She presented him with the evidence that the hybrids weren’t killing humans anymore. And she then attempted to threaten him if he double-crossed her. She implied that she would tell congress all about the lies that she was forced to feed them.

And Tobias decided to combat that by destroying both hers and JD’s credibility. He followed up his meeting with Molly by releasing information on a terrorist cell hiding in the city. In which the city needed to be put on lockdown for its own safety what with people like Molly and JD hanging around.

So Tobias has declared war and, once he found out that Molly was carrying hybrid DNA, he no longer cared about whatever might happen to Molly.

There was a time where he thought he might be in love with her but now that doesn’t matter. Molly is the enemy and his ex-girlfriend is being pretty smug about being right. At first it was her erratic jealous behavior that made her question Molly but being right has made her rub it now that Tobias has dumped her.

And she played a part in getting Tobias to order an extinction on all hybrids. Even if they started out as human as Molly.

Speaking of being human, though, Lucy found out something she didn’t like. She ended up finding out by accident that all Humanics have an expiration date. Like milk for instance. So later Lucy cornered Charlie and demanded to know why he put that in all of their systems.

And he said that it was what John wanted. John wanted to give the Humanics a human experience and what better way to do that than to allow them die as if they were human. That way, every day to them, would mean something.

But Lucy didn’t like that and she went on to try and seduce Charlie when he was emotionally at his lowest.

See, they appear to have flirted around each other for a while now but when she threw Julie’s old relationship with John in his face – that made Charlie come close to sleeping with her out of spite. Though fortunately he stopped himself prior to giving in.

However, to end things before they got out of control, Charlies reminded her that sex wasn’t what she was functioned for. Lucy is a soldier. And that point was made even clearer when she received her marching order after Tobias routed out the hybrid camp.

Tobias had been looking for nearly three days and had almost caused riot with putting the city on lockdown. But the end, at least according to him, did justify the means. He found out where the hybrids were and then he deployed everything the GSC had at them.

He sent in the soldiers and he had a chemical weapon on standby that still needed to be tested out on live hybrids.

So a war is coming and hopefully Molly won’t be one of its casualties.