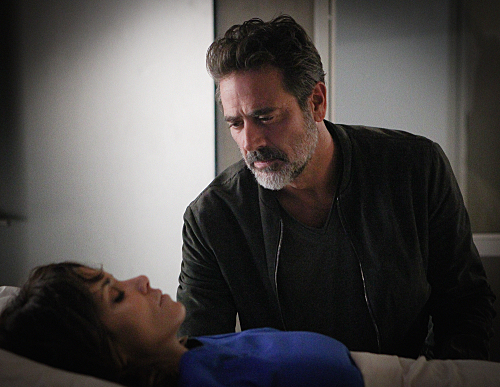 Tonight on CBS Steven Spielberg’s Extant starring Halle Berry returns with an all new Wednesday August 19, Season 2 episode 9 called, “The Other Side.” We’ve got your recap down below! On tonight’s episode Memories resurface as Molly [Halle Berry] succumbs to the virus.

On the last episode after a Global Security Commission raid on the hybrid compound, Molly desperately tried to save her son Adhu, while JD attempts to rescue his daughter who was being held captive by Shepherd. Meanwhile, Lucy became more of a threat to humans. Did you watch the last episode? If you missed it we have a full and detailed recap, right here for you.

On tonight’s episode per the CBS synopsis “memories resurface as Molly succumbs to the virus; Julie is confronted with hard choices; and the Hybrids seek revenge.”

The General needed answers on tonight’s episode of Extant and unfortunately a dying friend was the only one that could provide it.

Molly was there at the compound. Both before and after it was hit so she know how many Hybrids there originally were and to an extent a number of what remained. But it wasn’t easy to get Molly to comply. Molly is after all pretty stubborn and so she had a demand for Toby.

Molly told him that she wanted to see her son Ethan one last time. And while she was creating a video log in hopes that it would day fill in the blanks in his memory, Toby was trying to fulfill his end of the deal. And convince Julie to let Ethan come down to the medical bay to see his mother.

Though, neither Julie nor Charlie for that matter, wanted to bring Ethan around the facility. Ethan recently had put down Lucy when he caught her attempting to kill Julie. So naturally Ethan was left traumatized about what he was forced to do.

Ethan wasn’t programmed to be a soldier. For all intents and purposes, he’s still very much a child albeit a child that technically killed his sibling.

Thus there was only way for Ethan to understand how much Molly meant to him and why seeing her before she died would be important – he had to get his memories back. He had to know how much he had loved his mother. And luckily these memories hadn’t been discarded as trash.

Charlie and Julie were able to locate them and download them back into Ethan. And once he remembered, all Ethan wanted was his mom.

But Julie asked to see Molly first. Molly was out of it by this time yet Julie still wanted to apologize to her before she died. For it seems like Julie is finally taking responsibility for what happened to John.

John believed the Humanics project shouldn’t be used for war and, when he found out what was going to happen to life’s work, he told Julie that she was being naive if she felt she could remain in control. And to a certain extent he was right. In order to build Lucy and the hundreds of models based on her – the project had to cut corners and defy every principle that John had created.

So, after she had seen Molly, Julie called Charlie and asked him to shut the whole project down.

And Charlie was with her on this one. He felt like their project had become corrupted and he knew that they had to stop the Humanics for being used as weapons. Yet, when he tried, he couldn’t shut down the Humanics using their programming.

They were resisting limiters and the meant Charlie had to manually demobilize them. But prior to actually doing so, the Humanics were put on alert. Hybrids had broken into the GSC headquarters and the general had demanded they come to the rescue.

In case you don’t remember, there was two factions among the hybrids. There were the peaceful kind like Ahdu who simply wanted a life and then there was the others led by his son who felt like they should oppress the weaker human race. And it was just poor luck that the latter group is what survived the assault.

But Charlie is the one that had to go against his better judgment and release the Humanics.

At the time, he thought maybe the GSC could handle the fight on his own however he couldn’t stand by and do nothing when he learnt Julie and Ethan were still at the building. So he released the soldiers and then just prayed he had made the right decision.

Yet the one person that had fair chance against the Hybrid attack – Molly – had flat-lined in the final minutes of tonight’s episode. So with no Molly and Humanics carrying out freewill – who can say what will happen next!