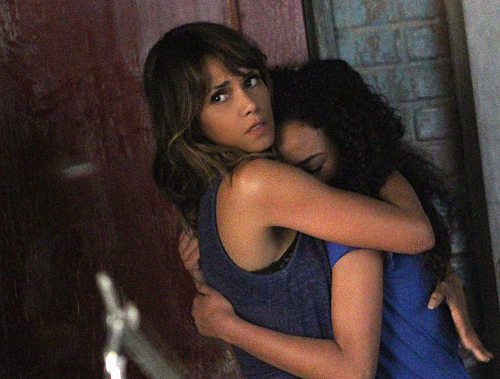 Tonight on CBS Steven Spielberg’s Extant starring Halle Berry returns with an all new Wednesday August 26, Season 2 episode 10 called, “Don’t Shoot the Messenger.” We’ve got your recap down below! On tonight’s episode Molly (Halle Berry) has a vision she can’t shake following a near-death experience.

On the last episode memories resurfaced as Molly succumbed to the virus; Julie was confronted with hard choices; and the Hybrids seek revenge. Did you watch the last episode? If you missed it we have a full and detailed recap, right here for you.

On tonight’s episode per the CBS synopsis “Molly has a vision she can’t shake following a near-death experience. Also: Shepherd’s loyalty to the Global Space Commission is questioned.”

Ares and the more militant brand of Hybrids had broken into GSC on tonight’s episode of Extant. However they weren’t the ones that the humans should have feared the most.

The Humanic army had been released in order to go save the humans but for some unknown reason Lucy seems to be with them. And the last anyone had seen of her, she had tried to kill Julie and Ethan was forced to shut her down. So Julie’s natural reaction upon seeing Lucy from the security footage was to run and hide.

And as long as Lucy remains in control of the Humanics, Julie won’t be the only one that had a legitimate reason to be afraid of Humanics.

But as for Molly, she eventually woke up from hibernation and she found Ethan right by her bedside waiting for her. It seems that earlier he had a feeling that Molly hadn’t died after all. Despite seeing her flat-line for himself. So he turned around during the evacuation – leaving Julie behind mind you – and was there for his mother when she needed him.

Ethan and Molly both then ran in JD and he assisted them in finding out who the hybrid bomber was. And she wasn’t pleased in finding out who it was. Particularly as Ares, in his grand scheme of being a world domination sort of leader, had decided to sacrifice Terra who was also the youngest of the group.

Terra aged as fast as everyone of her kind but she was still in her pre-teen body when Ares left her behind to die with the humans. And if Molly hadn’t showed up, she would have done what her big brother said without a doubt. However Molly had a special connection with Terra and was able to reach through to her before she could set off the bomb.

Thus she prevented a disaster and in the process was able to finally win over Toby. Toby even helped the ragtag group escape before the Humanic arrived. Only someone else managed to set off a bomb when no one else was looking and the media began reporting it that it was Terra that did so.

Meaning the Hybrids are considered more dangerous now than ever and for some that’s the perfect excuse to continue making Humanics regardless of the consequences. And the order to reinstall Lucy wasn’t a fluke. Someone had did that with an even higher authority than the general and no one apparently cares about the danger she presents to humans.

So Toby ended up creating a theory about that and he believed a man named Nicholas Calderon was the one behind the discrepancies in the Humanic make and model. See John wasn’t the only one to create the Humanics. Originally he had begun the project with this Nicholas and it wasn’t until they had a falling out about the future of the program that John went ahead on his own.

But Nicholas was a co-creator so he has the knowledge and the skill set to manipulate the Humanic even its from afar. And the only way to stop him would be to find him. Which is something Toby wanted to do and just never got the chance to follow up on.

Toby had got arrested for colluding with Molly. He later told his boss that he had a very good reason to commit treason yet she didn’t seem to care about the particulars. And merely told him to get a very good lawyer.

Afterwards, Toby got lucky enough to escape his security detail but sadly died on the road to Molly when someone had sent a drone after him.

Therefore Molly was losing allies faster than she was making them and eventually Terra abandoned her as well. The young girl went back to Ares when it looked like Molly was no longer in the position to help anyone including herself.

But Molly did have someone she could turn to because, without anyone knowing, John had a left a message behind programmed to go off the second a Humanic killed a human. And that happened when the Humanics showed up to “relieve” the humans trapped at the GSC. So speaking from beyond the grave – John told Molly that she needed to find Calderon if she wanted to shut down the Humanics.

According to John, he’s the only one left that’s capable of doing so!