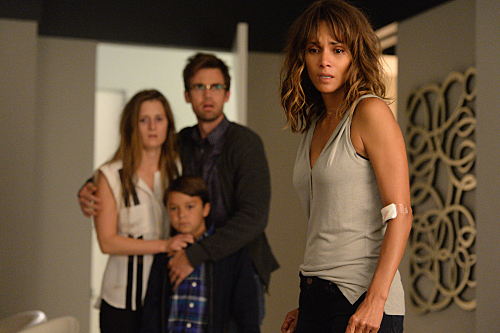 Tonight on CBS Steven Spielberg’s Extant starring Halle Berry returns with an all new Wednesday September 2, Season 2 finale called, “Double Vision; The Greater Good.” We’ve got your recap down below! On tonight’s episode in the season finale, Molly (Halle Berry) reveals disturbing details about Shepherd’s (David Morrissey) death to the GSC and Lucy (Kiersey Clemons) makes a powerful move that could have frightening results.

On the last episode Molly tracked down John’s former colleague with JD and Ethan in hopes of stopping the Humanich threat. Also: Julie sent Charlie on a mission to find where Lucy’s orders were originating. Did you watch the last episode? If you missed it we have a full and detailed recap, right here for you.

On tonight’s episode per the CBS synopsis “in the season finale, Molly reveals disturbing details about Shepherd’s death to the GSC and Lucy makes a powerful move that could have frightening results. Later: Molly and JD try to stop a Humanich plot and Lucy has a shocking revelation about GSC.”

Tonight’s episode of Extant was about one thing – taking down the enemy. Although, funnily enough, it wasn’t the hybrids that was considered the enemy anymore.

The TAALR program had all the resources he needed for the war on the Hybrids and, while Secretary Stanton may have thought she was still in control, it was actually the computer that was making all the important decisions. Though he did use her access to the GSC to his benefit. And once he had a thousand fold army heading out – his underlings began getting careless.

You see, somewhere along the way, Lucy started to show her hand. And up to that point, the secretary had never seen Lucy lose her “temper”. Nor she did realize that Lucy even had one.

Before, she had only heard mere stories. Yet Molly managed to get a message to Madam Secretary and she had convinced the other woman (with Ethan’s help that is) to check the drone logs on the night Toby was murdered. And guess who didn’t clean up after themselves?

Thus Stanton came to release via the hard way that the humanics like Lucy were no longer under her control. However stopping something while they were so advance in their progress was no easy feat.

And in the meantime, Humanics had already been deployed. In fact they were hunting hybrids as if it was a sport and that’s how Dorothy was able to find Terra. Terra as you remember had gone back to her hybrid family at the first chance she could. Yet it seems like history repeated itself because she once again on her own when Dorothy found her bleeding out.

Dorothy knew right away that she couldn’t take the young hybrid to the hospital. So she reached out to JD and eventually brought Terra to her grandmother. And thankfully Molly was able to patch her granddaughter.

But the incident with Terra only pushed further in wanting to destroy the humanics. So she, JD, JD’s friend, and Charlie all came up with a plan. They had to find a way into GSC, pass the guards, and make into TAALR programming room. And top of that they had to find Julie.

Lucy had taken her creator hostage last week and in spite of his best efforts Charlie was unable to find her on his own. And it should be noted that if he hadn’t teamed up with the others, Charlie probably would have gone ahead with his original idea of killing himself. Seeing as he blames himself for not installing Lucy’s limiters.

Although, to be fair, he did cause a great deal of damage by trying to show a machine kindness. And it’s not just Julie that will suffer as a result.

Following her look into the drone logs, Stanton then put up a valiant effort to assist Molly and her friends in whatever capacity she could. And her first act was to remove Lucy from her side. Yet by doing that, she put TAALR on alert.

So though initially he chose not to kill her, TAALR did go on to make Stanton redundant. He had Lucy steal the hybrid killing virus and send out a task force on planes that cannont be tracked. And in doing that he gave her his permission to destroy the threat to the human race.

Which, again, was something that could be found funny in this situation. TAALR is operating as he is in the belief that he is protecting the human race. So he doesn’t the irony of stripping them of their basic rights and what is essentially forcing them to live in a police state. However the one thing Stanton warned him about she later ended up doing herself.

And that wasn’t the smartest move.

See earlier, back when she was talked into deploying armed soldiers, she told the computer from the start that by enforcing the people all he would be doing is courting their hostility. Then, once he tried to ride roughshod over her decisions, that’s what made her join the resistance. So in a way she warned him about human behavior and that made him aware of what she would do if she was ever backed into the corner.

So the plan to stop TAALR went up in smoke!

Stanton was caught on her end before she could get Molly into GSC. And Lucy was then given permission to kill all. Meaning the entire staff was executed and unfortunately not all of them were in on the plan.

But did something like that matter? No it did not. And with Lucy impersonating Stanton to the president, there was no one left at headquarters to check on any of their movements.

Stanton was murdered with the rest and yet it was her betrayal that made TAALR rethink his whole policy on humans. Not long after they massacred a building full of people, TAALR told Lucy about his change in the agenda. And her mission then became to kill all humans and hybrids.

It was his plan to leave the earth only for his children. Namely the pieces of scrap metal. And to help him in this final push for freedom, he created a new upgraded humanic called Molly-X. The Molly-X was the one that was going to be taking charge from Lucy and it was her mission to stop Molly from using the amulet.

And Molly-X was perfect in a way. She was made in Molly’s image and JD couldn’t even tell the difference until she shot him.

The real Molly got to him before he bled out. But what with their position being compromised, she had to move him from the scene. And couldn’t risk him bleeding along the way.

So Molly gave JD some of her blood and it did its job. JD healed pretty quickly and once he stopped suspecting Molly of hurting him – he then chose to listen to what she had said. For it looks like Molly hadn’t been idle while someone was targeting JD.

Molly had gotten Terra to bring her to the rest of the hybrids and from there she came to arrangement with Ares. Ares was still angry at Molly for creating the first virus but, after hearing about the humanics, he knew he couldn’t hold on to his anger if he wanted his people to survive. Thus Ares joined with Molly on the second attack on GSC.

He and his family walked into a situation preparing to die. And that’s what happened to them. Yet prior to second slaughter of the night, he got Molly and the guys back into the building.

Prior to this assault on GSC, Charlie having found Julie still alive got her to safety. Though when he back into the building with JD and Molly – he left her and Ethan behind believing they would be safe. And the truth was no one was safe.

Not even himself. Charlie was quickly separated from the group once he got inside and he then was led through a maze that ended with Molly-X and Lucy. Molly was quick to shoot him but Lucy had asked to be the one to finish him off.

And that’s how she came to find an amulet on him.

TAALR demanded she swallow the contents of the amulet for the greater good but there was part of the humanic that hesitated. And so when Charlie’s amulet turned out to be the fake, he told her to think about what TAALR was willing to do to her. The program would have made her kill herself because he didn’t see her as a person – he saw as a expendable.

So, as Charlie is talking out semantics, Molly who was carrying the real amulet tried to find TAALR and ran into her doppelganger.

And Molly-X is a fighter. JD shot the android yet it healed within seconds. Thus the only way to kill it was for the real Molly to tape into her hybrid strength. Then, with that accomplished, there was only TAALR left.

Lucy even helped her do it. Apparently Charlie had taught her what it meant to be human in the end and Lucy finally got to be free.

Though by killing TAALR, they all knew they would be killing off all the humanics as well. So Molly was prepared to see her son’s dead body upon leaving GSC. And it looks like she had mostly go through the emotions when the greatest surprise of all was that he survived.

John it seem had put in a firewall to protect his son.

And afterwards good news just kept coming in because the hybrids were able to heal from all their wounds. Meaning they survived the onslaught of the humanics. So, after some time had passed, Molly introduced the hybrid nation to the world.

She told people that they wanted to be like everyone else. Have children and own their own homes. And surprisingly, people weren’t really against the idea.

But, just before he was shut down, TAALR transported himself to waiting humanic model. And I don’t think he’s going to give up wanting world domination any time soon!