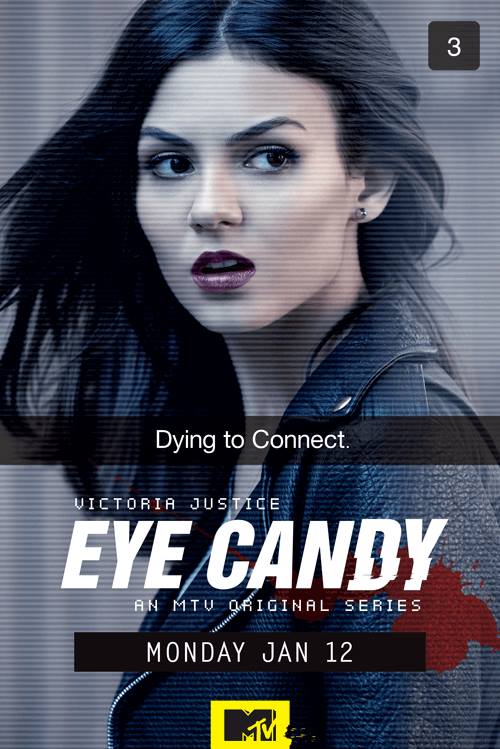 Tonight on MTV their new series Eye Candy premieres with an all new Monday January 12, season 1 premiere episode called “K3U” and we have your weekly recap below. On tonight’s episode, danger stems from a dating app.

The show is about computer genius Lindy Sampson (Victoria Justice) who goes on the hunt for a serial killer in New York. Lindy is a 21-year-old hacker with a gift for seeing clues and connections in the digital world that others can’t. Persuaded by her roommate to try online dating, Lindy begins to suspect that one of her suitors is a deadly cyber stalker. When the local cyber-crimes unit uncovers a potential serial killer in Manhattan, all signs point to this mysterious stalker. Teaming up with the cyber unit and some hacker friends, Lindy leads the charge to solve these murders while unleashing her own style of “justice” on the streets of New York City.

On tonight’s episode as per the MTV synopsis, “danger stems from a dating app in the opener of this series, in which a hacker tracks a potential serial killer in New York City.” It sounds like Eye Candy is going to be an awesome new show. Don’t forget to check CDL for our live recap of Eye Candy series premiere episode 1 at 8PM ET!

Lindy is not your typical 20 year old and on tonight’s series premiere of “Eye Candy” we get to watch Victoria Justice bring her to life.

The newest show “Eye Candy” is of course about Lindy but more importantly it focuses on her relationship with her sister Sara. You see a few years ago, Sara was kidnapped. It all happened so fast there was nothing anyone could do. And that includes her big sister Lindy.

The kidnapping happened right in front of Lindy’s eyes and ever since then Lindy has been looking for her. And while she hasn’t had that much success or even progress in finding her sister, she has picked up a few tricks along the way. So, rather than be downtrodden, Lindy is now using her hacking skills as a way to help other people find their missing loved ones.

It helps her deal with her loss.

Though her demanding boss and her cop ex-boyfriend have sort of been getting in the way of her side job. Lindy, unfortunately, uses the computers at work to help with her searches and it’s been hard to do that with her boss constantly taking a walk around the room.

It seems bosses likes to make sure their employees are actually working every now and then.

And as for the ex, he appears to be the reason Lindy has to be careful about having computer access on her home computer. Ben, probably the great love of Lindy’s life, was the one that had arrested her for hacking and since she’s been put on parole – her life on the net has been more than just strained. The sad truth is if the cops had their way then her hobby of helping people would be nonexistent!

And all of this is what led to her big night out! Lindy’s friends wanted her to take a break from the crime fighting for a minute and just have fun. They figured if she relaxes enough then maybe she would be ready to move on from Ben. But her good intentioned friends went about cheering her up their friend the wrong way.

They signed on her to a dating app and even built up a profile for her using the nickname Eye Candy. And at first, what they did appeared to be harmless. Lindy met a few guys and had a couple of drinks. However, things took a turn later on. After she returned home to sign on to her computer, Lindy found out someone had hacked her webcam to spy on her in her own apartment.

And, admittedly, that’s when Eye Candy got scared!

Someone had spied on her and instead of taking the threat seriously – Lindy tried to host her own episode of “To Catch a Predator”. She wanted to prove to herself that she could handle everything and somehow that led to her wanting to pull off a sting. So she dragged her friends into helping her with it. And Sophia hadn’t felt comfortable.

Though, she promised she wouldn’t, Sophia ratted out Lindy to Ben. She felt scared for her friend and wanted a cop nearby in case went wrong. And in despite all the safeguards Lindy had put in place that’s exactly what ended up happening.

Lindy tried to catch her stalker and all she did was reveal a darker side to him. The stalker is also a killer. He killed one of the guys Lindy had suspected of being him. Then he made sure Lindy would be the one to find the body.

So Ben and his partner stepped in at this point. They took over the case and once they started reviewing – everyone noticed they might be dealing with a serial killer. Three other people that had used the same dating app as Lindy had also received threatening texts before they disappeared.

And with Lindy sparking this weirdo’s interest, Ben promised her he was going to keep close eye on her.

Though, the killer doesn’t appear to be a fan of sharing Lindy with anyone. He killed the guy she thought was a suspect and was thus flirting with. And, eventually, he tricked Lindy into handing Ben over to him.

Subsequently, the killer had installed several cameras at Lindy’s place and he made her think he was going to attack her roommate and best friend Sophia. But that was all a set-up Lindy hadn’t known about until after she called Ben and begged him to go save her friend’s life.

The entire time this was happening, Sophia was actually safe at work and the only person that was in the apartment when Ben got there was the killer.

The killer took Ben to the roof of their girls’ apartment and he left Ben’s body there for Lindy to find. So, it’s starting to like bodies are the only way this killer knows how to communicate with Lindy. For this killer isn’t just another sociopath. He does want a connection but he’s trying to force one on Lindy to find his perfect partner. And that’s something she’s never going to agree to!