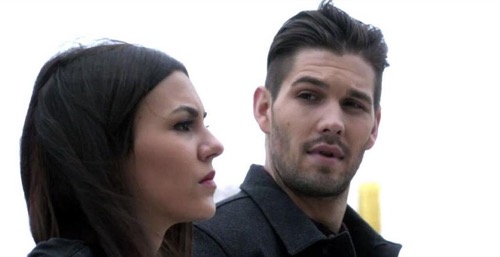 Tonight on MTV their new series Eye Candy continues with an all-new Monday, January 26, season 1 episode 3 called “HBTU” and we have your weekly recap below. On tonight’s episode, Lindy [Victoria Justice] becomes increasingly obsessed with finding the killer.

On the last episode, Lindy was eager to find the killer by dating suspects, but in doing so, she put herself in danger. Did you watch the last episode? If you missed it, we have a full and detailed recap right here for you.

On tonight’s episode as per the MTV synopsis, “Lindy becomes increasingly obsessed with finding the killer; Sophia throws a party.”

It sounds like Eye Candy is going to be an awesome new show. Don’t forget to check CDL for our live recap of Eye Candy episode 3 tonight at 8PM ET!

Tonight’s episode of Eye Candy kicks off with Lindy and Tommy heading over to Reese’s apartment, they arrive and find a mobile made out of human teeth and a creepy mannequin. Lindy feels guilty that the killer killed Reese – but they run the DNA on the teeth, and learn that they belonged to a woman. Lindy is excited and thinks that Reese may still be alive – now they just have to find him. They find a match in the DNA base, there was a tooth-less woman found and labeled as a Jane Doe years ago. Tommy shows Lindy a picture of the Jane Doe, and she recognizes her as a woman named Julia Becker. Apparently Julia’s parents contacted Lindy for help because when they reported Julia missing the police wouldn’t look for her. Tommy is baffled because there are no missing person reports in the database for her.

At work Connor’s boss lectures him about his latest fluff piece that he wrote for the site. He promises him that he is working on something huge that is going to blow his mind, and then texts Sophia. Meanwhile, Lindy and Tommy pay Julia’s mother a visit. She insists that she filled out a missing person’s report and she hasn’t seen her daughter in weeks. Tommy breaks the news to her that her daughter Julia is dead and she breaks down and starts sobbing.

Lindy heads home and climbs in the shower, she gets out and hears a noise – it is just her roommate Sophia. She tells Lindy that she is crushing on the detective that is sitting outside and guarding their house. Sophia says she is nervous about the creep stalking Lindy and thinks they should get out of town. Lindy reassures her that the NYPD is on it and they will be safe, since they aren’t running away together, Lindy agrees to have a Chinese date later that weekend.

Lindy finds a white unlabeled envelope in her mailbox – she opens it and finds a photo inside of her and Sarah, it has been photoshopped to make Sarah’s clothes look bloody. She gives the photo to Tommy, and he begins running it through his database. Lindy explains that the picture was taken on Sarah’s birthday a few weeks before she disappeared. The detective wants to know why the bracelet that Sarah was wearing in the original picture is missing – Lindy explains that she got it for her sitter as a birthday present and then she lost it. Before the detective leaves, she warns Lindy not to talk to Jake because he is still a suspect.

Tommy gets a match in the photo database, the person that sent them to her used pictures from three different crime scenes of two men and one woman. The three people do have one thing in common though, they are all on the dating website, which means the serial killer was dating men and women.

Sophia heads out with Connor and he prods her for information on the case Lindy and the NYPD are working on. Sophia whines that she can’t tell him – so she writes down on a note pad that “they found teeth.” Meanwhile, Jake calls Lindy and leaves her a voicemail telling her to give him a call, she ignores his message. The next day at work, George shows Lindy an article online that Connor wrote, and the serial killer and with detailed information about the teeth that they found.

Lindy is furious when she learns that Connor posted the story on the website, she heads to his kickboxing class and confronts him, and Amish (the owner of the site) jumps to his defense and says that he isn’t taking the story down. Lindy heads back to work, and George says that they should crash Amish’s site, but Lindy points out that it is pointless because the post has already gone viral. George looks at the picture that the killer sent to Lindy, and they realize that the background is static like Reese’s TV in his apartment.
Lindy and George rush to Reese’s apartment and turn on his TV – they go through his DVR and make an acronym “Myperficio.” Lindy realizes that the killer mutilates each of his victims based on their imperfections. When he met people on the dating website, he was upset because they hid their flaws from him like their crooked teeth and skin blemishes.

Jake shows up at the police station and files a report because someone put spyware on his cell phone. Tommy realizes that it was Lindy and rushes to her house to warn her that Jake knows she was on to him. Tommy and Lindy head in to her apartment and are shocked when Sophia and a huge group of friends jump out and scream “Surprise!” – apparently her roommate decided to thrown her a birthday party. Tommy sticks around and decides to supervise, he receives a phone call and learns that they found Reese’s clothes. He tells the other cop he has to go and not to let Lindy out of his sight.

Lindy is dancing with Sophia, and looks up and is shocked to see Jake making his way through the party. He gives her a gift – a scrapbook full of takeout menus from all of the good restaurants across the city. Connor shows up at the party and Sophia refuses to let him in, she says he is uninvited and the detective watching the party tells him that he has to leave. Meanwhile, Jake continues to flirt with Lindy. She asks him how she got her address to send her flowers. He explains that it was completely innocent, and he found her address on the internet. Lindy falls to the ground and everything goes blurry – she thinks she had too much to drink, Jake rushes to get her water. Meanwhile, there is a distraction and the garbage can in the bathroom catches in fire. The detective rushes to take care of it, and someone carries Lindy out of the party.

Tommy storms in to the apartment and Lindy is missing He learns that the bloody clothes were found in the apartment of Jake’s building, and he pulls his gun on him and demands to know where he took Lindy. Jake puts his hands up and swears he was just going to get her water.

Lindy wake up in an old abandoned building and sees Reese chained to a chair with his throat slit, someone dressed in black runs off. He drops a silver gift box as he dies. After Lindy is rescued, she opens the box and realizes that it is the bracelet that her sister lost on her last birthday.