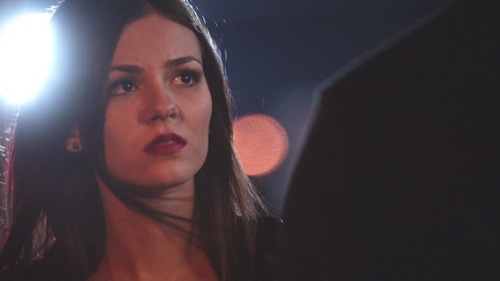 Tonight on MTV their new series Eye Candy continues with an all new Monday January 19, season 1 episode 2 called “BRB” and we have your weekly recap below. On tonight’s episode, Lindy [Victoria Justice] is eager to find the killer by dating suspects.

On the last episode, danger stemmed from a dating app in the opener of this new series, in which a hacker tracked a potential serial killer in New York City. Did you watch the last episode? If you missed it, we have a full and detailed recap right here for you.

On tonight’s episode as per the MTV synopsis, “Lindy is eager to find the killer by dating suspects, but in doing so, she puts herself in danger.”

It sounds like Eye Candy is going to be an awesome new show. Don’t forget to check CDL for our live recap of Eye Candy episode 2 at 8PM ET!

Lindy meets one of the Flirtual guys in a nightclub. He gives her a pill, which she spits out. As she walks to his car with him, Tommy calls her and tells her the last woman he met on the site was found dead with her face burned off. She tells the guy she has to go. After the guy leaves, Tommy comes up and tells her her obsession is hurting their surveillance efforts. Lindy tells him the dead girl would still be alive if they had done their job.

Lindy comes home, and Sophia is worried because she keeps staying out all night. She confronts her on following the guys from Flirtual, and Lindy says she didn’t tell her because she didn’t want her to worry. Sophia tells her it isn’t her fault what happened with Ben, and that taking care of all of this isn’t her job, it’s the police’s job.

A sergeant from NYPD’s cyber crimes unit confronts Lindy at the coffee shop to tell her they’ve noticed her vigilante surveillance. She tells Lindy that she doesn’t want to stop her, she wants to help her. Lindy says she doesn’t work with people like them, having been disillusioned by her previous issues with the police. The sergeant says she can make up for their failures regarding her sister, saying they have the resources to help.

Jake surprises Lindy in her apartment with flowers, saying he wants to make her dinner. Sophia and Connor come in, and Lindy talks to Sophia in the bathroom. Sophia asks if there’s a serial killer in the house right now, and Lindy says she doesn’t think so. She tells Sophia that another victim has been found with a burned off face. Connor comes in and the two of them decide to stay with Lindy and Jake for safety. When Lindy kisses his cheek and puts him in the cab, Tommy sees from across the street and angrily confronts her, asking her if this is a game. He says she needs to leave this to the police, telling her that Reese has an alibi for the day of the murder.

Lindy gets George’s help hacking into the city’s security cameras. She watches clips of the streets surrounding the time the victim was killed. She sees a car appear after a camera pans away and back, sure it is the killer’s car.

At the police station, Tommy comes in to find Lindy waiting. She thinks Reese’s alibi is fake.

The sergeant tells Tommy that she wants Lindy working on the case with them, which will benefit everyone.

Tommy is driving when he has to stop at a bridge that appears to have a train crossing. Tommy calls for confirmation, and finds out that there is no train; the bridge is being controlled. Lindy’s cell phone signal reveals where she is, and he texts her that he is on his way.
Reese takes Lindy to a junkyard, where he gives a dark speech about how cars are like people in that they get old and damaged. He tries to kiss her and she backs away, he says he thought they were going to have fun and he wouldn’t have wasted his time if she weren’t down.

Tommy tries to break into Reese’s car, but gets knocked out by a mysterious figure.

When Lindy gets into Tommy’s car, she finds that Tommy has been replaced by a dummy. The car starts driving out of Lindy’s control while Tommy is trapped in the trunk. She engages the brakes with her cell phone right before the back of the car hits a post.

Back at the station, Tommy makes Lindy tell Sophia and Connor that she’s working with the cyber crimes unit to help solve the crime. Sophia brings up the fact that Lindy said she couldn’t trust the police. She says they know Reese is the killer. When asked how she knows, Tommy reveals a mannequin covered with photos of Lindy. Then, Lindy and Tommy receive a video on their phones showing the killer following and attacking Reese.