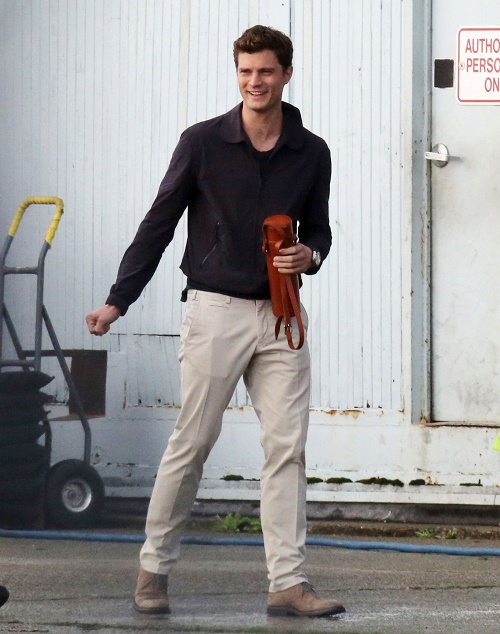 Fifty Shades of Grey is now mere weeks from coming out, and while that means plenty of middle-aged women squealing in a movie theater, it also means that we’re getting bombarded with interviews from E.L. James [the author of the book], Sam Taylor-Johnson [the director], and the actors, Dakota Johnson and Jamie Dornan.

One such interview from Sam Taylor-Johnson sheds a lot of light on the process of bringing those infamously raunchy sex scenes to the screen, and in particular, how involved E.L. James was with the book-to-movie translation. There were rumors that E.L. James wasn’t willing to hand over the film rights without complete approval on everything, including the sex scenes.

In fact, Sam told Porter Magazine, “It was difficult, I’m not going to lie. [Me and James] definitely fought, but they were creative fights, and we would resolve them. We would have proper on-set ‘barneys,’ and I’m not confrontational, but it was about finding a way between the two of us, satisfying her vision of what she’d written as well as my need to visualize this person on-screen, but, you know, we got there.”

In other words, E.L. James was being precious about her characters and her story, in a way that most first-time authors are. And luckily for her, the books’ success enabled her to have some semblance of control over filming, which is the only reason she’s even involved in promotion.

Plus, for all intents and purposes, the film is very, VERY toned down compared to the book – and it would have to be, to garner an R rating as opposed to an NC-17 rating. But clearly, if E.L. James had her way, then Sam Taylor-Johnson and Universal would be making the NC-17 version of Fifty Shades of Grey. And that means the film’s profit would have been significantly lower, a.k.a. it would never have happened.