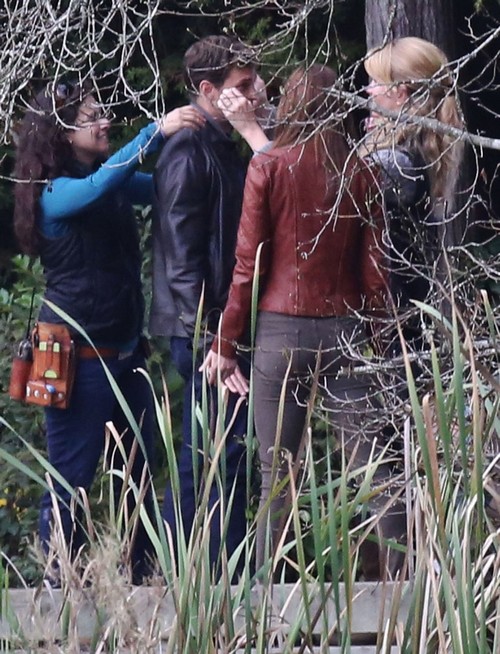 Fifty Shades of Grey’s Dakota Johnson is a “dishrag” without passion, sexiness or chemistry with Jaimie Dornan – it’s so bad that they are reshooting the film! We have bad news, Fifty Shades of Grey fans. When Charlie Hunnam left the role of Christian Grey with weeks left to the production’s start date, the studio scrambled to find a replacement actor. Jamie Dornan signed on to the franchise at the last minute, but sources close to the film say that he didn’t really do a proper chemistry test with the actress playing Anastasia Steele, Dakota Johnson. I mean, have you looked at Jamie Dornan? The guy could probably generate chemistry with a wet paper towel, so they probably weren’t worried about the on-screen heat between him and Dakota. However, it seems like maybe they should have worried more, since sources are now claiming that Dakota and Jamie are generating nada on screen.

A source close to the film’s production revealed that the filmmakers are re-shooting many of the film’s sexy scenes, telling US Weekly, “Dakota isn’t coming off sexy enough. Ana needs to be naive, not a dish-rag. No one should question the heat or intensity of our actors.”

Ouch. Poor Dakota Johnson. But in this case, I totally concur. You can tell from their interviews together that Jamie Dornan is really giving this his all, while Dakota just sort of sits there. She doesn’t have any charisma in interviews, and she doesn’t really have the ‘it’ factor that Jamie does. In fact, she’s even duller than her literary inspiration, Kristen Stewart’s Bella Swan. At least Kristen Stewart and Robert Pattinson generated major chemistry in Twilight, so much so that it led to a real-life romance between the two of them. And since Fifty Shades of Grey is inspired by Twilight, shouldn’t Christian Grey’s and Anastasia Steele’s chemistry be just as strong? Except if these sources are telling the truth [and they are, since it’s from US Weekly], then Dakota Johnson has sucked out all the heat and sexiness from the film. And since Fifty Shades of Grey is basically just sex with a side of BDSM, how is it going to work without any chemistry?

What good is a sex movie that isn’t sexy??? Fifty shades of reshoots continue! Actor Jamie Dornan and Dakota Johnson film reshoots for “Fifty Shades Of Grey” in the woods in Vancouver, Canada on October 14, 2014. The pair shared a kiss on multiple occasions. Director Sam Taylor-Johnson was seen giving the pair some guidance between takes. FameFlynet