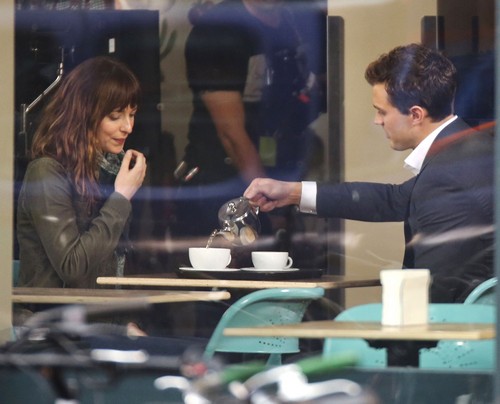 After months and months of speculation and gossip, Fifty Shades of Grey has officially begun production in Vancouver, Canada. Sam Taylor-Johnson directs, with Jamie Dornan starring as Christian Grey and Dakota Johnson starring as Anastasia Steele.

The first official production pic uploaded to Instagram revealed that the first scene being shot was ‘Scene 25’. It’s hard to say what the scene was, but on-set pictures showed Jamie and Dakota having lunch together, so we can assume it has something to do with that. Needless to say, despite the initial criticism over the casting, both Jamie and Dakota definitely look their parts.

Obviously, this comes after a lot of controversy and drama over the casting decisions. Charlie Hunnam was initially cast as Christian Grey, before dropping out less than a month later, citing ‘scheduling issues’. He clearly didn’t have scheduling issues, and just got cold feet about the project and franchise. That opened the way for Jamie Dornan to step in, and in all honesty, it’s probably better that Dornan took over. He physically fits the role better, and he’s an unknown, which means his acting career won’t be affected if the film is a flop, and it will take off if the film’s a hit. With these big franchise films based on bestsellers, the studio’s always smarter taking chances on unknowns. It worked for Twilight and it worked for the Hunger Games, and there’s no reason it shouldn’t work for Fifty Shades of Grey. Obviously, all three of these aforementioned stories are in different realms, and there’s no guarantee Fifty Shades will be as successful as Twilight or as well received as the Hunger Games. But you never know.

What do you guys think of the first set photos from the film? Do you think Jamie and Dakota look their parts? Let us know your thoughts in the comments.