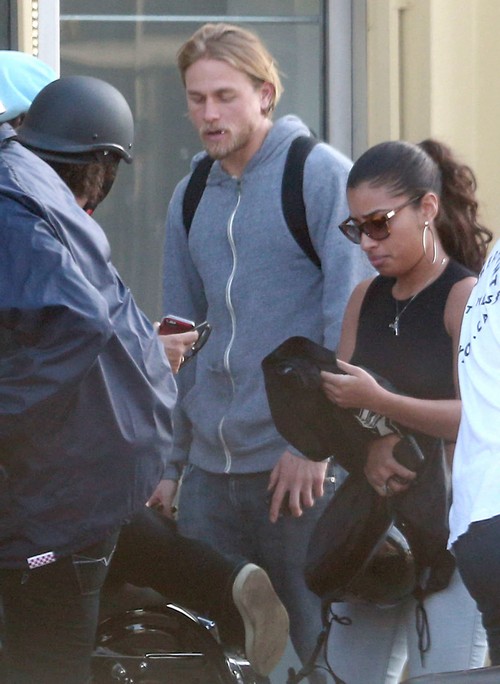 Sons of Anarchy’s Charlie Hunnam really, really doesn’t want people putting him and Fifty Shades of Grey in the same sentence anymore. I suppose it’s hard to blame him for that, considering that he’s a major movie and TV star, and yet most of his publicity is coming from that shitty franchise. It’s been more than a year since Charlie’s exit from the Fifty Shades of Grey movie, citing scheduling conflicts amid rumors that he got fired. But even though the movie is still months away from being released, people can’t stop talking about Charlie Hunnam’s reasons for exiting Fifty Shades of Grey – and it’s making him very, very angry.

Charlie ended up speaking to Entertainment Weekly about the mass of speculation regarding his leaving the project, explaining, “There was a whirlwind of speculation that went around it, and I just feel like I’m happy to do interviews to promote projects and to get the word out there and stuff, but I don’t feel as though I really owe anyone an explanation on the things I do.”

He claims that he pulled out the film at the ‘eleventh hour’, and we know he’s not lying about that. But the way Universal has talked about Charlie Hunnam following his exit from the franchise says quite a lot about what happened – they were neither upset nor bitter towards him, even though by his own admission, he pulled out at literally the last minute.

It makes me think that there’s more that neither the studio nor actor is admitting, although it is also the studio’s job to be professional in these instances. I suppose we can’t hate on the studio for maintaining a sense of neutrality regarding these proceedings, especially if Charlie really did have a nervous breakdown. Trust me, the filmmakers and producers behind Fifty Shades of Grey would rather have lost a thousand actors at the last minute than be responsible for causing Charlie Hunnam a mental breakdown.

‘Sons Of Anarchy’ actor Charlie Hunnam hangs out with his biker buddies in West Hollywood, California on September 28, 2014. Charlie finally acknowledged why he quit the ‘Fifty Shades Of Grey’ movie stating, ‘I wouldn’t have signed up in the first place if I didn’t want to do it…It was a really, really difficult time in my life. And then I just fell in love, creatively…I started talking about this thing and I just got so excited. I fell in love with the character and started seeing him and becoming intoxicated…[Due to a hectic work schedule] I just had like…frankly, something of a nervous breakdown.’ FameFlynet