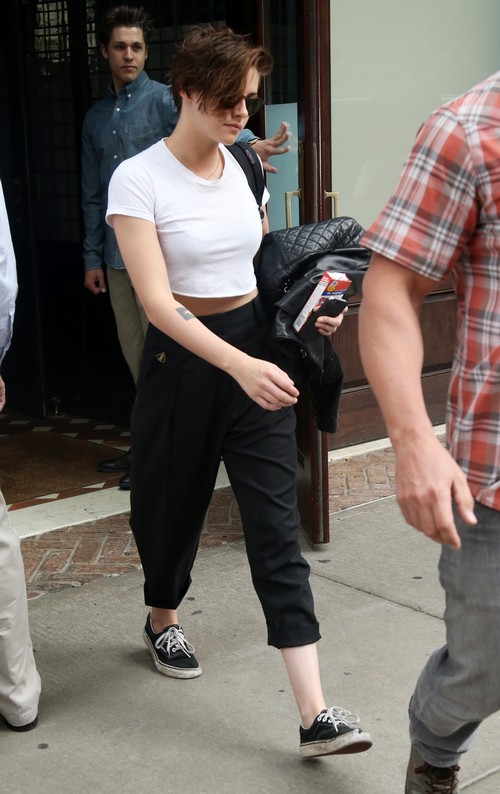 FKA Twigs better watch out, since Kristen Stewart is coming out swinging and wants to get Robert Pattinson back dating her again like the Twilight days. After all these years of dissing Twilight and making derisive comments towards the franchise that made her famous, Kristen Stewart is finally saying something nice. However, I doubt she’s doing this out of the goodness of her heart, and I’m thinking it’s a combination of a good Oscar push PR image overhaul, and her attempt at winning Robert Pattinson back.

For one thing, Kristen Stewart saying anything nice about the Twilight saga immediately rings bells. But also, her comments are so unintentionally vague that it becomes deadly obvious she’s talking about her co-worker relationship with Robert Pattinson as well as the movies themselves. After all that is what people remember about the awful Twilight movies – Robert Pattinson and Kristen Stewart’s dating and romance… and of course Kristen’s disgusting cheating!

In an interview with E! News, Kristen explains, “I was able to work for years and years on something that took so much out of all us and did not leave us empty, [it] replaced every bit that it took.”

What a vague, non-committal way to say something nice about the franchise that gave you an entire career, no? But then again, fans have already started dissecting and analyzing her words, and have come to the conclusion that Kristen was referring to her relationship with Robert Pattinson when she mentions the part about ‘replacing every bit it took’. So in other words, she hated working on a franchise about sparkly vampires, but dating Rob allowed her some compensation for her troubles.

Is Kristen Stewart still continuing on her quest to win Robert Pattinson back? It’s been more than two years since Kristen cheated on Rob, but she’s the one who’s not moving on. But even putting that aside, Kristen discussing this now – in a major interview no less – means that FKA Twigs better look out. Kristen’s sick of standing by the sidelines and not fighting for Rob, but if this is the best she can do, FKA can more or less be assured that Rob’s staying with her.