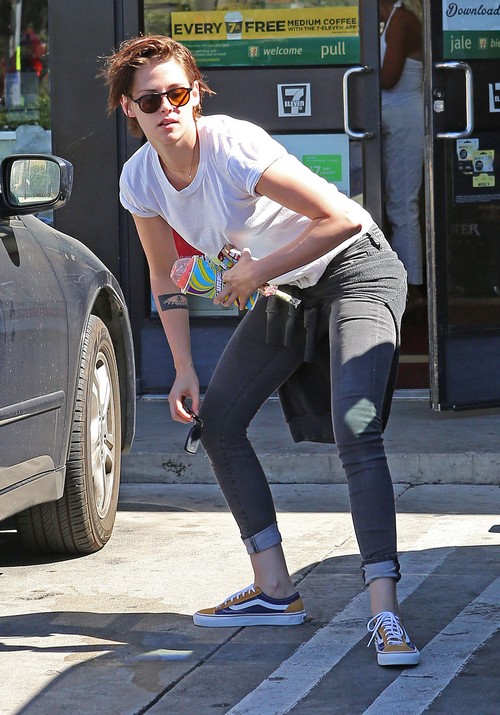 Kristen Stewart with Sony’s impetus is now attempting to win an Oscar for Still Alice, or at least get a nomination for Best Supporting Actress and reestablish herself as a legitimate actress, years after she first burst onto the scene. Believe it or not, when Kristen first started acting, her skills were praised far more than they are now. She received raves for her early performances, and she was even touted during awards season for her performance in Sean Penn’s Into The Wild. However, all that critical acclaim soon vanished into the abyss after the shit-turd of a performance that we got from the Twilight Saga. Even though everyone in that franchise was phoning it in, Kristen’s performance was quite possibly the most derided, by both critics and the public. As such, any critical mileage she had built up with critics and Oscar voters vanished, since nobody wanted to be the one to nominate *that* lip-biting vortex of blandness as a possible Oscar contender.

Since Twilight began, there have been some attempts to bring Kristen Stewart’s name into Oscar talk, especially when The Runaways was released. But let’s be serious – there as never any actual consideration, just random talk drummed up by Kristen’s fans and obsessive Twihards.

He explained, “Kristen Stewart has never been better than she is in this film. Kristen Stewart is someone we have seen in many movies over the last several years — four in 2014, with three coming up in 2015 so far — and she has shown great range in such a wide variety of genres. But there is something about this performance that has new depths that she hasn’t shown before. She’s really terrific in the film.”

Mr. Barker adds that Kristen is fully ‘supportive’ of this campaign, because duh – why wouldn’t she want an Oscar nomination? A few years ago, Kristen once said that she didn’t want to go to the Oscars unless she was nominated, but obviously she’s since gone as a presenter several times. In this scenario, it will be nice vindication on her part if she finally gets a nomination, won’t it? Kristen will be able to throw the nomination in everyone’s faces, especially people who said that she couldn’t act and that she had no range or ability. But still, this whole Oscar campaign seems like it’s a bit premature, especially with the rigid competition this year. Sony might believe that Kristen’s performance is enough to garner a strong Oscar push, but it’ll just be more humiliating if they go all out and she doesn’t even get a nomination.

Kristen Stewart leaves a friends house and stops by a 7-Eleven convenience store for a slurpee on a hot day in Los Angeles, California on October 4, 2014. Kristen is said to be heartbroken with news that her former love Robert Pattinson is getting ready to move back to London to be with girlfriend FKA Twigs.