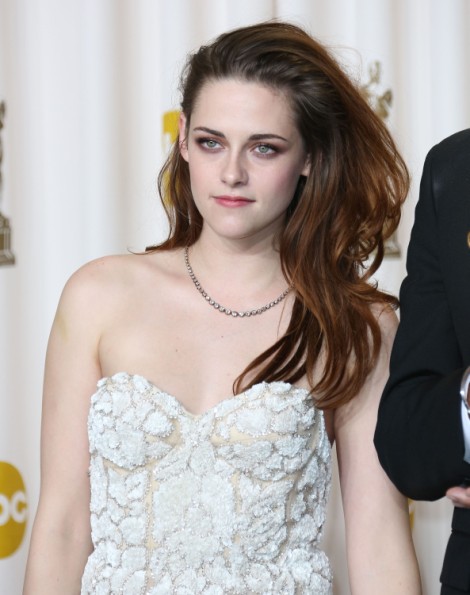 Before all you Twihards freak out at me and call this a blatant display of unfair K-Stew bashing, let me point out that I talked this over with fellow CDL writer, Sarah (who is a HUGE Kristen Stewart fan), and she agreed. So there. She sucked last night. Yes, the dress was ugly. It was Reem Acra. Kristen Stewart looked way out of place and uncomfortable in it. But you can save an ugly dress, right? Confidence and clean hair can go a long way but neither were on display last night at the Oscars. Kristen Stewart clearly didn’t want to be there. And since I bitched at Jennifer Aniston for this earlier I’m not going to let Kristen off the hook either. If you’re not going to bring it on the most publicized night of the year then why bother?

And don’t tell me she misses Robert Pattinson so much she can’t bother to take a shower because I’m over that nonsense. Her pouting and constant looks of annoyance made her look like a child and it was the wrong time and the wrong place especially since it was Jennifer Lawrence’s night. Now, I’ve never bought in to the rivalry there just because I don’t think Jennifer’s capable of acting that stupid. So I doubt there was sour grapes but the two women do go up for the same roles a lot. They are each other’s major competition a lot of the time. Neither are particularly good at playing the Hollywood game, nor do they want to. But if last night showed us anything it’s that Jennifer can laugh off the silliness and be a good sport. She can sign autographs, smile when she has to and move on. Kristen just won’t allow herself. She’s so hell bent on being this anti-establishment bad ass that she can’t see she’s her own worst enemy. Kristen and Jennifer are the same age. Didn’t Jennifer seem light years older and more mature? And this girl loves her fart jokes. It’s just a shame that Kristen couldn’t pull it together. I do believe she’s got talent and can have a career post-Twilight. She just needs to get out of her own way first… and wash her god damned hair.

Was Kristen Stewart the worst dressed of the night? Did anyone out there think she looked decent?