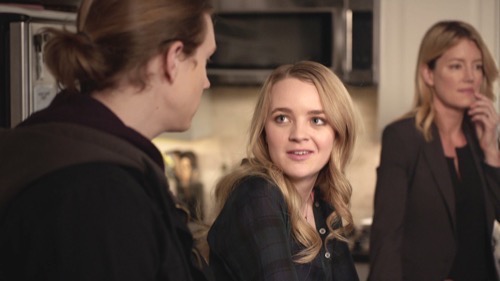 Tonight on MTV Finding Carter returns with an all new Tuesday April 7, season 2 episode 2 called, “Shut Up and Drive,” and we have your weekly recap below. On tonight’s episode, the Wilsons seek justice for Carter’s [Kathryn Prescott] kidnapping.

On the last episode, Lori kidnapped Carter for a second time; the Wilson family learned the truth that Carter and Taylor’s mother was not who they thought she was. Did you watch last week’s episode? If you missed it we have a full and detailed recap right here for you.

On tonight’s episode per the MTV synopsis “the Wilsons seek justice for Carter’s kidnapping. In other events, Carter’s friends celebrate her safe return while Taylor struggles with Max’s emotional recovery.”

Be sure to tune in to FINDING CARTER on MTV at 10 PM EST and check here for a live recap of this fantastic show. Hit up the comments to tell us what you think about Finding Carter. In the meantime, check out the preview for tonight’s episode below.

Tonight’s episode of Finding Carter kicks off with Carter waking up – Taylor has been up all night. Carter can tell that she is still upset about their crazy night, she reassures Carter that she is fine and she doesn’t want to dwell – she has an economics test to study for. Taylor heads downstairs and Carter has a flashback – she heads in to her dad’s room and says that something happened with Lori that is really bothering her. Carter explains that in the motel room Lori was on the phone with someone that was helping her, she thinks that person is someone that she knows.

Carter’s dad David reassures her that he has no idea who Lori was working with. Carter calls him out and asks him if he was helping Lori – he laughs at how absurd that would be. In the kitchen Liz tries to talk to Taylor but she blows her off. Max has physical therapy and Carter volunteers to drive him. Carter corners her mom and asks her if she can go to the police station to see Lori, the FBI is interrogating her tomorrow and Carter wants to watch. Elizabeth snaps that there is nothing more she needs to know about Lori, the police are taking care of it.

In the car Carter rants to Max that she needs to go to Lori’s interrogation. She thinks that her parents are hiding something and there is much more to the story and why Lori came after her. Max reassures Carter that her parents are just trying to protect her, that doesn’t mean that they are keeping a secret from her.

Liz heads to work and confesses to Kyle that the fall-out Lori’s kidnapping is affecting her kids more than she thought. Kyle reassures her that kids are tough, and they will get over it. Carter heads to school and her friends rush to greet her. B announces that she is throwing her a “Welcome Back” party later that night with all of the drinks and dancing she needs to get her mind off form Lori.

Carter is preoccupied – she is determined to get the transcripts from Lori’s interrogation from the FBI. After school Carter pays her dad a visit and demands to know why he is lying. She knows he lied about the picture of him that Lori had, there was no way she snuck in to the house and took a picture of him while he was sleeping. David argues that Lori is mentally insane and Carter can’t listen to anything that she says. Carter won’t take “no” for an answer – finally her Dad confesses that he “had a thing” with Lori, he says it was just a one night stand and it was the biggest mistake of his life. He swears that afterward he never seen Lori again until the day that Carter was found. Liz has no idea that he had an affair with Lori, David says that she can never know because it will destroy her.

Carter finds Liz in the kitchen – she is scrambling around trying to cook dinner, and she can’t cook. Carter heads upstairs and asks Taylor to go talk their mom, she needs reassurance that she is their real mom. Taylor scoffs that Liz will be fine and she doesn’t need to hear that she is her real mom. Taylor skips Carter’s welcome home party and heads to Ofe’s house to study. Max is disappointed that she isn’t going out with them. At Ofe’s house Taylor rants to him that having a live-in boyfriend is not all that it is cracked up to be, nothing is the same with her and Max since he got shot.

At the party, Carter and her friends are pounding drinks. Max slips away, and Carter is shocked to see that Crash is out of jail and Max is talking to him. Crash storms off and Carter chases after him – she demand to know why he isn’t in jail. He confesses that he turned in the guy that sold him the gun. Carter cries that he left her stranded in a gas station with her friend dying in her arms. He thanks her for turning him in, he was dangerous and he needed someone to stop him. Crash says that he needs Max to forgive him – he feels horrible about what happened.

Carter, Gabe, and Max stumble through the front door and are loud and drunk. Taylor comes downstairs and is furious when they explain to her that Crash showed up at the party. Max takes Carter up to her room and tucks her in to bed, she cries that Crash almost killed him and it is all her fault. Max comforts her and tells her to get some sleep. Max heads in to Taylor’s room and she rants that Carter nearly got him killed and if she brings Crash back in to their lives she will never forgive her. Max tries to reason with Taylor and explains that everything is not “black and white.”

The next morning Taylor rats Carter out to her parents and tells them that she saw Crash last night. Carter insists that she is getting back together with him, and she scoffs that she is the only one in their family that tells the truth. David gives her a ride to school and lectures her about keeping his affair with Lori a secret form her mother.

Max leaves physical therapy, and Crash is sitting outside waiting for him again. He explains that he is not going to stop stalking Max until he “makes things right between them.” Crash explains that he cared about Carter, and he never meant to hurt her or Max. Max finally caves and gets in to the car with Crash. Taylor sees Crash drop Max off at the house and she shouts at him, she says that he is crazy for hanging out with someone who almost killed him. Max argues that “people change,” Taylor snaps that people do change and now Max is “damaged,” before she storms out of the house. She heads straight over to Ofe’s house and cries to him that she needs everything to go back to normal – he gives her some advice and tells her that she needs to talk it out with her boyfriend.

Elizabeth visits Carter in her bedroom and apologizes to her for not telling her that Crash had gotten out of jail. Carter’s mom explains that she knows how important the truth is, and all she ever wanted to know was the truth when Carter went missing – regardless of whether it was good or bad.

Taylor heads home and sits down with Max, they have a long talk and Taylor explains that she thinks that they are in two different places. She tells Max that she thinks they should break up for a little while. Taylor cries that she really loves him, but they both need to be able to “do their own thing.”

In the FBI interrogation room Lori explains that she met David in the park many years ago – he was always alone with their girls. Lori says that David was miserable, Elizabeth had crushed her self-esteem. David and Liz got in a huge fight and she left town and went to her parent’s house, and then he ran in to her at a bar and they slept together that night. Lori thought that he was going to leave his wife and they were going to raise his daughters together.

Meanwhile, Carter is talking to her dad and trying to convince him to come clean to Liz about his affair. He is scared that Liz can’t forgive him – they head to the police station to tell Liz the truth but they are too late, Liz has been listening in on Lori’s interrogation and she knows that David had an affair with Lori.