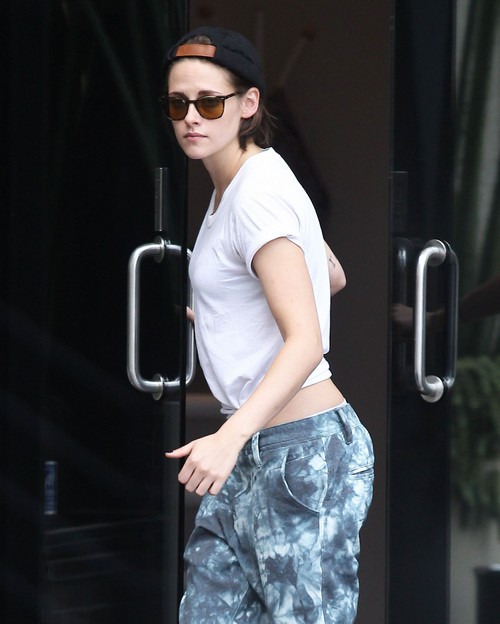 FKA Twigs and Kristen Stewart have their own individual skill sets and reasons for being famous, but most would agree that Robert Pattinson is their closest association. However, we’ve looked over FKA’s past few photoshoots [since she started dating Rob] and noticed something interesting – that FKA seems to be copying Kristen….

If you look at all of Kristen’s Chanel photoshoots and the Chanel outfits that she wears and then you look at FKA’s recent photoshoots, there’s a very obvious overlapping style. For example, Kristen was wearing this Chanel necklace last year, and then FKA Twigs wore pretty much the same necklace in a much later photoshoot with V Magazine.

Then, another one of Kristen’s Chanel ads shows her wearing a blazer and belt, and then in another recent picture of FKA’s, she’s wearing the exact same blazer and belt.

Look, some marketing genius was probably like the Robsten crazies are still out in full force, so let’s give them a conspiracy theory to obsess about. Plus, I wouldn’t be surprised if FKA Twigs really was purposefully targeting Kristen’s clothing and style. I mean, she pretty much inception’ed Rob into falling in love with her, right? One minute, she was just some unknown singer that nobody knew anything about, and the next, she was Rob’s muse, lover, fiance, and ‘rising star’. All the things that once belonged to Kristen Stewart, but now belong to someone that would never have gotten to where she is without Robert Pattinson’s name and fame.

So sure, you can buy that she subtly influenced Robert Pattinson through things like copying Kristen Stewart’s ‘don’t-give-a-f***’ attitude. And of course, it worked. Robert Pattinson and FKA Twigs are now engaged to be married, and Kristen Stewart is… well, she’s in a relationship with Alicia Cargile, but despite rumors to the contrary, I don’t think an engagement or wedding is in the works for them.