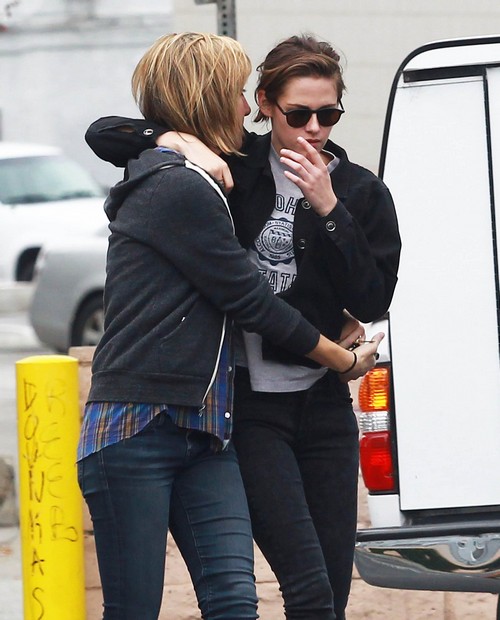 Robert Pattinson’s future wife and FKA Twigs hates his ex-girlfriend Kristen Stewart – and all of the diehard Twilight fans who won’t stop campaigning for a Robsten reunion. If FKA Twigs ever publicly dissed Kristen Stewart or Twilight fans, it would be a publicity nightmare and potentially bring down Robert’s earning power – which is the last thing Twigs wants, she’s become quite accustomed to his bottomless bank account. But, that doesn’t mean that FKA Twigs’s friends can’t completely slam Kristen Stewart online – on behalf of FKA Twigs.

A close friend of FKA Twigs got in to a feud with multiple Twlight fans and Robsten supporters on social media, he goes by the name of “Thxtandroidx.” He attacked and cyberbullied fans on a Robert Pattinson and Kristen Stewart Instagram page, and went in to a rant in the comment section of a “Robsten” meme. Twigs’s friend “Android” commented, “Shame. Lol. They broke up. Your Instagram is shit. You’re a sad low live with no love life clinging on to the ex relationship of two people that don’t even know you exist.”

The war of words between FKA Twigs’s friend and Robsten fans escalated and he even told one of them to “go commit suicide,” and bragged that he was also friends with Robert Pattinson and had spent more time with him than his fans ever would. The heated argument took a turn for the worse when Twigs’ pal began slamming Kristen Stewart and called out her sexuality – which her fans did not take too kindly to. Twigs’s friend ranted that Kristen “is a lesbian now and has moved on.” Kristen Stewart is in a relationship now with Alicia Cargile and actually seems happy – something she never did while in the Robert Pattinson Twilight showmance.

Sure, FKA Twigs isn’t technically responsible for her friends’ behavior on social media – but it is definitely not a good look that she associates with people who are telling Twilight fans to “go commit suicide.” And, some disgruntled Robsten fans even believe that Twigs may have put him up to the hurtful cyber-bullying. One thing is for sure, regardless of whether Twigs was encouraging that attack on Robsten fans – she obviously has been talking badly to her friend about Kristen Stewart, or else he wouldn’t have felt compelled to get online and clear the air.

What do you think about the crazy cyber-bullying? Was FKA Twigs really behind the hurtful comments? Is it wrong for Robert Pattinson to associate with someone who treats his fans so poorly? Let us know what you think in the comments below!

‘Twilight’ actress Kristen Stewart and her rumored girlfriend Alicia Cargile are spotted packing on the PDA while enjoying lunch with a friend in Los Angeles, California on May 25, 2015. Kristen and her live-in girl pal Alicia, couldn’t keep their hands off of each other while enjoying Memorial Day! FameFlynet