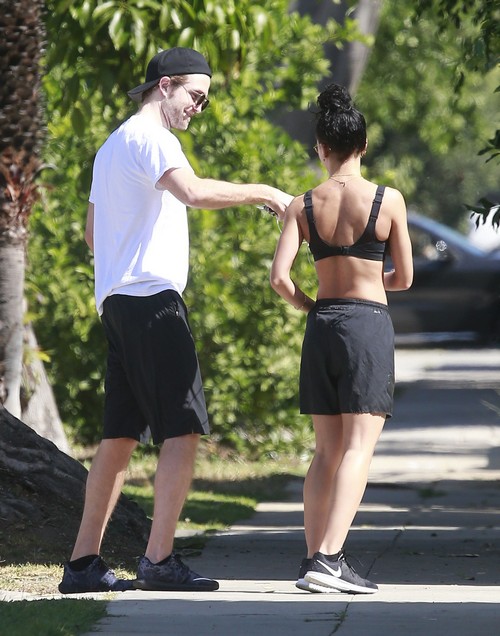 Is FKA Twigs pregnant by Robert Pattinson and hiding a baby bump since their engagement? Robert Pattinson and FKA Twigs are engaged, but they’re both very, very young… almost too young to be getting engaged, some might say. According to a new report from Star Magazine, Rob’s engagement to FKA might not have been as spontaneous as it seemed. The report suggests that FKA Twigs might actually be hiding a secret baby bump, because apparently, young celebrities can’t get engaged without baby bump rumors coming into the mix.

Star’s source claims that eyewitnesses noticed the baby bump when FKA Twigs performed a set at the Coachella Music Festival a few weeks ago, explaining, “Many in the audience noticed what seemed like a baby bum. When she wasn’t performing, Rob was always around her, acting super-protective.” Plus, FKA Twigs reportedly wasn’t drinking at all during the event, and she was practically the only one who was sober.

The pregnancy rumors continued to circulate after FKA Twigs and Robert Pattinson were spotted leaving the Century City Medical Plaza in LA, even though they literally could have gone to the doctor for any other reason.

So far, the evidence is solid, if not compelling. Pregnancy rumors do get circulated in the tabloids on much thinner evidence, and there’s a solid possibility that FKA Twigs actually is pregnant. However, knowing FKA Twigs’ penchant for famewhoring, I’m surprised that she’s managed to keep her baby bump hidden for this long, i.e. no accidental-on-purpose baby bump reveals, and really, nothing to explicitly hint at her being pregnant. It almost makes me not believe that she is pregnant….

What do you guys think? Is FKA Twigs pregnant with Robert Pattinson’s baby, and is that the reason for their relatively hasty engagement? Or would FKA Twigs have revealed the pregnancy already, especially since she can’t seem to stop famewhoring for the paparazzi?