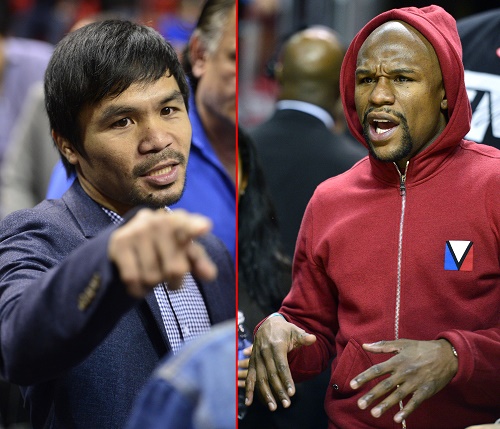 Muhammad Ali is Team Pacquiao! After many years in the making, the highly anticipated fight between boxing legends Floyd Mayweather Jr. and Manny Pacquiao is set to go down on May 2nd 2015. Even though the boxing match is still weeks away – fans are getting their picks in now, including the great Muhammad Ali. Rasheeda Ali recently dished to TMZ that her father, 73 year old Muhammad Ali, is rooting for Manny Pacquiao, and in not so many words totally dissed his challenger Floyd Mayweather.

Rasheda Ali told TMZ, “My dad is Team Pacquiao all the way! My dad really likes Manny, he is a huge fan of his. He knows Manny is a great fighter … but it is more about what he does outside the ring. He is such a charitable person.” Rasheda went on to say that her father Muhammad Ali and Mayweather are nothing alike and that is why he isn’t rooting for him during the fight. She explained, “My dad stood for things…Mayweather I don’t think there is a comparison.”

Floyd Mayweather has rubbed a lot of boxing fans the wrong way over the years, and a lot of people (apparently Muhammad Ali included) are backing Manny Pacquiao just because of the simple fact that Mayweather notoriously plead guilty to assaulting his own girlfriend five years ago. We’re not exactly shocked that Muhammad Ali wouldn’t want to back Mayweather after his domestic abuse scandal – and a lot of other celebrities and big names in boxing are supporting Pacquiao for the same reasons. Obviously, Rasheda Ali can’t come right out and say, “My dad is Team Pacquiao because he doesn’t punch women,” but the fact that she stressed that it is “more about what he does outside the ring” says it all.

Are you Team Pacquiao or Team Mayweather? Do you think that the reason Muhammad Ali and his daughter Rasheda are supporting Manny is because of Mayweather’s domestic abuse? Let us know what you think in the comments below!