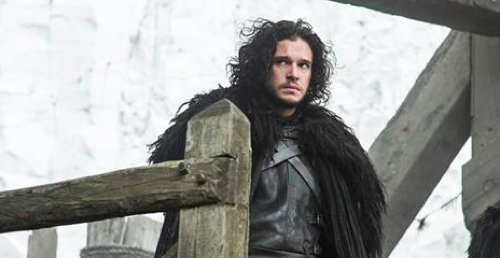 Tonight on HBO, Game of Thrones is back with an all new Sunday, May 10 season 5 episode 5 called “Kill Thy Boy” and we have your weekly recap below. On this evening’s episode, in season 5 episode 5, Jon [Kit Harington] finds an unexpected ally; Brienne [Gwendoline Christie]  looks for Sansa. [Sophie Turner]

On last week’s episode, Jaime and Bronn snuck into Dorne by sea, but their arrival wasn’t the secret they’d hoped it would be. Meanwhile, Sansa discussed her future with Littlefinger; Jon was tempted by Melisandre; and Tyrion had a new traveling companion on his way to Meereen. Did you watch last week’s episode? If you missed it we have a full and detailed recap, right here for you.

Daenerys looks upon the body of Ser Barristan, who was lost in the recent fight with the Harpies. Daenerys asks for the leaders of the families who oversee Mereen and leads them into her Dragon dungeon. She threatens them. Her dragon toasts a couple of them. Daenerys wants to know who was responsible in ordering the attack.

Jon Snow tries to get down to the bottom of how to win over the Wildlings. He orders for the remaining Wildlings to come to the wall and, in effect, stand beside him and fight with him when the time comes. Jon Snow doesn’t want them to kneel before him; rather, he wants them to serve as his allies.

During an assembly, Jon Snow, as the new Lord Commander, tries to convince other members of the Night’s Watch that they need to work with the Free Folk–or else they will be responsible for the deaths of hundreds of people. It’s time everyone look towards peace. Nobody supports his new perspective and goal.

Brienne and Pod continue their mission to assist Sansa Stark–even though she was adamant that she doesn’t want anything to do with them. Brienne tells Pod that Lady Sansa is in danger so long as she’s living in the shadows of the Boltons.

Next, we see that Ramsay has a lover, Miranda, who’s quickly growing jealous of Sansa and his new arrangement. They’re set to marry.

Meanwhile, a maid comes into Sansa’s quarters. She quickly tells her that she still has friends in the North and that, should she ever find herself in any kind of trouble, that she only needs to light a candle in the highest window of the broken tower.

Later, Sansa visits this broken tower, where she’s met by Miranda, Ramsay’s jealous lover. Miranda is the Kennel Master’s daughter and informs Sansa that there might be something that she can remember her mother by. Miranda leads her into the kennels and tells her to go look in the last stall. Theon resides in the last chamber. He says, “You shouldn’t be here.”

At dinner, Ramsay pours wine and makes a toast. Next, Ramsay calls in Theon and orders him to apologize to Sansa for murdering her two brothers. To make things even more awkward, Ramsay says that Theon will be giving her away at the wedding ceremony. But, wait, the crazy dinner isn’t over . . . Roose Bolton says that his wife is pregnant. And it seems, based on the way she’s carrying, to be a boy. Ramsay is displeased by this news, as he fears for what this will do to his position.

After dinner, Roose tells Ramsay of his mother and the fact that Stannis has an army at Castle Black–and he needs help holding the North.

Stannis comes in to see Samwell. They talk briefly about the army of the dead, which Samwell has witnessed firsthand, and what Lady Melisandre has confirmed: Death marches towards the wall. Stannis asks Samwell to keep reading his books in an effort to discover the weaknesses of these undead creatures and how they can be thwarted.

Daenerys visits one of the masters she’s locked away and informs him that she will restore the traditions of arena fighting to Mereen–but the only fights will be among free men. Also, she will marry him, a respected master of Mereen, in an order to bridge the new with the old.

Jorah and Tyrion sail through Valyria. Tyrion asks him if he’s afraid of the Doom that lurks there. Jorah says that he’s not afraid of it–but pirates are.

As they sail through the old, deserted city, they both see Daenerys’s dragon fly above them. Next, they are attacked by Stone Men. Jorah fights them off. Tyrion asks to be cut free. In an effort escape one of the men, Tyrion leaps overboard. One of the Stone Men beneath the water’s surface pulls him downward.

Next, Tyrion wakes up on a beach. He was saved by Jorah. Jorah asks Tyrion if any of the Stone Men, which possess a contagious disease that “greys” the skin, touched him. Tyrion says no. Jorah says no, too.

However, as Jorah walks away, he slowly pulls up his sleeve to reveal a patch of stony, greying flesh. He’s been touched.