BY CDL Staff on May 3, 2015 | Comments: one comment
Related : Game of Thrones, Recap, Television, TV 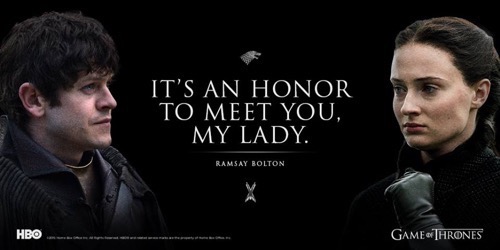 Tonight on HBO, Game of Thrones is back with an all new Sunday, May 3 season 5 episode 4 called “Sons of the Harpy” and we have your weekly recap below. On this evening’s episode, in season 5 episode 4, Jaime [Nikolaj Coster-Waldau] and Bronn [Jerome Flynn] sneak into Dorne by sea, but their arrival isn’t the secret they’d hoped it would be.

On last week’s episode, in King’s Landing, Queen Margaery (Natalie Dormer) enjoyed her new husband. Tyrion and Varys walked the Long Bridge of Volantis. Did you watch last week’s episode? If you missed it we have a full and detailed recap, right here for you.

On tonight’s episode per the HBO synopsis, “Jaime and Bronn sneak into Dorne by sea, but their arrival isn’t the secret they’d hoped it would be. Meanwhile, Sansa discusses her future with Littlefinger; Jon is tempted by Melisandre; and Tyrion has a new traveling companion on his way to Meereen.”

Jorah knocks out a fisherman. He has Tyrion captive and throws him on the boat. Jorah’s taking Tyrion to Daenerys.

Meanwhile, Jaime travels to Dorne with Bronn. They are headed to Dorne to rescue Cersei and Jaime’s daughter.

Cersei sends someone from House Tyrell to the Iron Bank.

Next, Cersei meets with the High Sparrow. They talk about the gods and sinners.

Meanwhile, the Sparrows go throughout King’s Landing dishing out “justice” and punishing those who have “sinned.” They attack the brothel. Among those punished is Loras Tyrell, who is just minding his own business and practicing his combat skills. He’s locked away in a cell, punished for being gay.

Margaery is furious. She orders the young king to free him. Tommen goes to his mother, Cersei, who ensures him that she’s not keeping Loras captive–and that he is the king and he can order as he wishes. Next, Tommen goes to the Sparrow’s place of residence. The Sparrows block his entrance. Tommen’s guards say that they can easily clear the landing of these fanatics, but he’s not willing to employ such violence. Tommen returns to Margaery, who is rightfully upset that her husband isn’t better asserting his power in King’s Landing. Margaery leaves him. She wants to go be with her family.

On the wall, Jon Snow continues his duties as the new overseer of the Night’s Watch. Jon’s signing papers to allow for new recruits to join the Watch. Among the new recruits is a man from House Bolton, the people who took over Winterfell.

Melisandre comes in to see Jon Snow. She urges him to march with Stannis and his people to Winterfell. She encourages him to stand by their side as they drive the rats from his home. Jon Snow says that he and the men of the Night’s Watch will have no part in the wars of the Seven Kingdoms–they will not take part in that fight. Melisandre tells him that there’s but one war: The war against life and death. Next, she attempts to seduce him, and she’s almost successful . . . but Jon says that he’s loved another and can’t break the vow he took upon joining the Night’s Watch. Melisandre says that the “dead don’t need love,” only the living require that. But Jon completely rejects Melisandre. She walks out of his chamber. Before exiting for good, she says, “You know nothing, Jon Snow.”

Stannis is in his quarters. His daughter comes in. She asks him if he is ashamed of her. He tells her a story of how she acquired her sickness, and how he did everything in his power to heal her. He said people encouraged him to send her away to live with the Stone Men, but he rejected their opinions and watched her, slowly, fight the disease. He says that she is his daughter, and a princess. She’s overjoyed by her father’s expression of love and hugs him.

Petyr tells Sansa of how he thinks things are going to go down. He believes that Stannis will descend upon the North and knock the Boltons out of power. Once that happens, he believes, as the last surviving Stark, she’ll be named Wardeness of the North. He says that she must play her position as Ramsay Bolton’s new wife with great care – and to make him hers. She says that she doesn’t know how to do that; however, Petyr says that she’s already started: Ramsay is falling head-over-heels for her.

Jaime and Bronn land on the beaches of Dorne. They’re greeted by four Dorne mercenaries. They try to play the “innocent lost travelers” card, but the mercenaries aren’t buying it. The two manage to take on the four fighters.

Meanwhile, Prince Oberyn’s lover, Ellaria Sand, prepares to wage war on the Lannisters. She’s seeking revenge for Prince Oberyn’s death. She’s received word that Jaime was smuggled into Dorne. She will do everything in her power to make sure Marcella, her main leverage against the Lannisters, does not slip from her grip.

Jorah and Tyrion are headed to Daenerys.

Daenerys continues her rule in Mereen. She doesn’t budge when it comes to reinstating the city’s sport-fighting traditions.

Meanwhile, Sons of the Harpy lead an attack. They trap several Unsullied in a ruined building. The slaughter is brutal, and the fight continues throughout the city. Among the casualties is Ser Barristan.