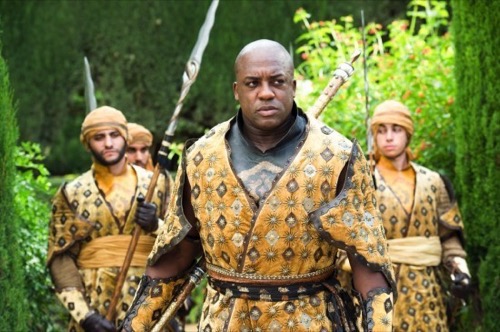 Tonight on HBO, Game of Thrones is back with an all new Sunday, May 17 season 5 episode 6 called “Unbowed, Unbent, Unbroken”. On this evening’s episode, in the Season 5 episode 6, the Sand Snakes attack; Arya [Maisie Williams] continues her training; Jaime and Bronn reach their destination; Trystane [Toby Sebastian] and Myrcella [Nell Tiger Free] discuss their future; Jorah [Iain Glen] and Tyrion [Peter Dinklage] have a run-in with slavers.

On last week’s episode, Dany (Emilia Clarke) made a difficult decision in Meereen. Jon (Kit Harington) recruited the help of an unexpected ally. Brienne (Gwendoline Christie) searched for Sansa (Sophie Turner). Theon (Alfie Allen) remained under Ramsay’s (Iwan Rheon) control. Did you watch last week’s episode? If you missed it we have a full and detailed recap, right here for you.

Arya cleans a body in the House of Black and White. She prepares it with care. Some people come to collect the body and carry it into another room. The people leave the door open and Arya goes to investigate, but her nemesis in the house slams the door shut and says she’s not to go in there. Arya gets frustrated and asks what these people are doing with the bodies.

Arya wants to rise in the House of Black and White, but she can’t seem to get past the puzzling games of Jaqen.

Meanwhile, Tyrion and Jorah continue their travels. Jorah kneels by the water and examines his patch of grey skin, which he contracted from the Stone Men. Tyrion doesn’t know of his current state.

Arya’s scrubbing the floors when a man comes in with a young woman. She’s sick, and the man says that no healer in all the lands can save her. She consoles the woman, who’s bent over the pool of deadly water, and tells her a story of how she was once healed by these waters. Arya gives the woman a sip of the water from a stone cup. Later, the woman’s dead and sprawled out on Arya’s cleaning station.

Fed up with being kept in the dark, Arya leaves her cleaning room and goes through the door that she was forbidden to enter. Beyond, she enters a large chamber containing the heads/faces of all the bodies that have gone there to die. Jaqen is, of course, there. He tells her that she’s still not ready to become “no one,” but he confirms that she is ready to become “someone else.”

Tyrion and Jorah walk across the hillside when they encounter some pirates/slavers of some sort. They’re captured. The captain says that they’re not bound for Mereen, but Tyrion convinces him that Jorah is one of the best warriors in all the kindgoms and that he should be given a chance in the fighting pits, which Daenerys has recently reopened.

Petyr visits King’s Landing to talk with Cersei. He informs her that he’s found Sansa. He strikes a bargain with Cersei: seize Winterfell and, should he be successful, become Warden of the North. Cersei also wants to “see Sansa’s head on a spike.”

Jaime marches on towards the Water Gardens where he’ll seek to save his daughter.

Trystane and Myrcella make plans for their future. They’re walking through the gardens when Jaime and Bronn arrive. Jaime tells Myrcella that she needs to come with him, but before they can go anyhere, the Sand Snakes attack.

The Queen of Thorns comes to visit Cersei in an effort to get her grandson, Loras, freed. She tells Cersei that she knows she’s behind the fanatical Sparrows, but Cersei ensures the Queen of Thrones that she has had nothing to do with it.

Next, Loras is put on a small trial. He’s been accused of being gay, which is against The Faith. The Master Sparrow leads the trial. Loras is questioned, he denies the accusations. Next, Queen Margaery is questioned. She, of course, in an effort to protect her brother, denies the accusations as well. Next, Loras’s squire boy, and the fellow he’s been sharing intimate relations with, enters. He confirms tha fact that Loras is gay and that, in fact, he’s slept with him. Cersei, acting as if she’s not a master manipulator, tries to defend House Tyrell, but the blond squire says that Loras has a tattoo on his thigh — evidence that he’s seen him naked. The Master Sparrow says that this hearing has provided enough evidence to call for a formal trial. Both Loras and Queen Margaery will be placed on trial and judged in accordance with The Faith.

Needless to say, Cersei’s overjoyed, though she doesn’t show it.

In Winterfell, Miranda comes in to draw Sansa a bath. Miranda starts going off about all the women in Ramsay’s past. Sansa listens, with open ears, until she grows tired of all the babbling. She asks Miranda how long she’s loved Ramsay. Sansa’s a smart girl, even though she doesn’t act like it sometimes, and sees right through the game Miranda’s playing at. Sansa tells her that Winterfell is her home and that she can’t frighten her.

After the ceremony, Ramsay and Sansa go to their bedroom. Ramsay makes Sansa confirm that she’s still a virgin. Next, they have sex, and Ramsay forces Reek to watch.