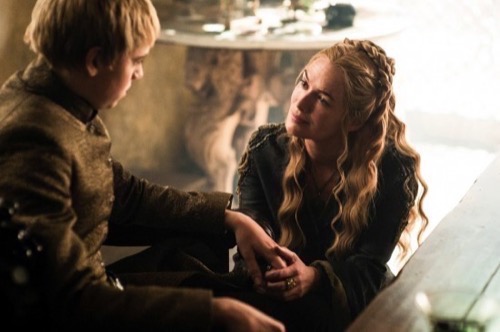 Tonight on HBO, Game of Thrones is back with an all new Sunday, May 24 season 5 episode 7 called “The Gift”. On this evening’s episode, in the Season 5 episode 7, the Sand Snakes attack; Sansa [Sophie Turner] reaches out to Theon; Jon [Kit Harington] senses conflict is near.

On last week’s episode, Arya (Maisie Williams) trained. Jorah (Iain Glen) and Tyrion (Peter Dinklage) ran into slavers. Trystane (Toby Sebastian) and Myrcella (Nell Tiger Free) made plans. Jaime and Bronn reached their destination. The Sand Snakes attacked. Did you watch last week’s episode? If you missed it we have a full and detailed recap, right here for you.

On tonight’s episode per the HBO synopsis, “Jon prepares for conflict. Sansa tries to talk to Theon. Brienne waits for a sign. Stannis (Stephen Dillane) remains stubborn. Jaime attempts to reconnect with family.”

Jon removes Tormund’s shackles as they prepare for their journey. Jon says farewell to Sam, who gifts him a dagger made of dragon’s glass, the item he used to kill the White Walker.

In Winterfell, Theon enters Sansa’s room. Sansa asks Theon for his help. She reveals that Ramsay has been keeping her locked in a room all day and every night he comes for her. Theon has lost himself, his identity, and is too afraid to go against Ramsay’s leadership. Sansa begs him to help her. She tells him that her family still has friends in the North. She instructs him to go light a candle and place it in the highest window of the broken tower. He’s hesitant; however, he nods and grabs the candle before exiting the room.

Theon trudges through the cold wind and snow and runs straight to Ramsay. Meanwhile, on a nearby hill, Brienne watches the window of the tower. She waits for the sign.

Maester Aemon is on his deathbed on the wall. Sam sits beside him as he grows delusional. Soon, he dies, and a ceremony is held for him in his honor. “And now his watch has ended,” say the men of the Night’s Watch collectively.

Sansa meets Ramsay outside, where he tells her how happy it is that he was arranged to marry such a beautiful woman. While Sansa is walking, she swipes a sharp tool and hides it within her robes. Ramsay begins talking about Stannis and his plans. Next, Sansa brings up the fact that Ramsay’s stepmother is pregnant. She asks him what happens if she gives birth to a boy. He says that it won’t matter, that he’ll still be the eldest. Sansa confirms that a true born will always hold the greater power and reminds him that he, in fact, is a bastard. He says that he was naturalized by a formal decree from Tommen. Sansa encourages him to remember that Tommen is also a bastard. Ramsay says that bastards can rise high in the world. Why, just look at all of Jon Snow’s success. Sansa is taken aback by the news of Jon Snow rising so highly in the ranks of the Night’s Watch.

Ramsay leads Sansa to the courtyard where her friend, the woman who told her to light the candle in the window, has been skinned. She hangs there, dead. Theon revealed Sansa’s method of escape to Ramsay. Sansa cries. She’s ordered back to her chamber.

Stannis refuses to retreat back to Castle Black, even in light of the treacherous winter weather. Stannis asks Melisandre if he can still trust in her visions. He’s trusted in them his entire life, but now it seems as if doubt enters his world. Melisandre tries to reignite his trust. She says that he’s seen the power of king’s blood. Next, she suggests they use his daughter’s blood to further their quest, but he dismisses this idea and asks Melisandre to get the hell out of his tent.

Meanwhile, two of the guards on the Night’s Watch attack Gilly. Sam comes to her aid, but he’s badly beaten. Ultimately, a wolf scares them away. Sam is badly beaten and Gilly tends to his wounds. He doesn’t want her to leave him. They have sex.

The slave trader sells Jorah and Tyrion to the same citizen of Mereen.

The Queen of Thorns goes to visit The High Sparrow. She says she’s here to see the release of her grandson and granddaughter. She asks the man what he wants. What is his motivations for putting them both on trial like this and making such a public spectacle. The High Sparrow says that he’s driven by a simple truth: to serve the gods and make sure justice served. The sacred laws must be adhered to. She tells him that her people will stop sending crops to King’s Landing — and when everyone here starves, she will make sure that the people know who’s to blame. Lady Olenna’s threats and pointed barbs don’t ruffle the High Sparrow’s feathers. He says that her lifetime of wealth and riches have left her “blinded in one why.” He tells her that House Tyrell is the “few,” and they are the “many.” He suggests that she be worried what might happen when the “many” stop fearing the “few.” He makes his exit.

Lady Olenna is given a piece of parchment with a black seal.

Meanwhile, Tommen is grief stricken over the fact that Margaery is locked in a cell. Cersei tries to console him but she’s always such a tricky witch it’s hard to know where her loyalties truly lie. She tells Tommen that she would do anything to protect her children, that she would burn cities to the ground in order to protect them, and will talk with the High Sparrow on his behalf.

Jaime tries to convince Myrcella to return with him, but she’s perfectly happy in Dorne.

Lady Olenna was sent for by Petyr. They meet in his brothel, which has been destroyed by the Sparrows. Lady Olenna reminds him that, together, they killed a king — and that should her house fall to an unfortunate fate, she won’t have any reason to hide the facts any longer. Petyr reassures her that their interests are aligned. He says he has information for her that he withheld from Cersei.

Preliminary fights begin. Cersei and her future husband sit and view the fights to see who emerges the victor. When Jorah catches sight of Daenerys sitting in the stands, he rushes out with a helmet on to crush the lowly fighters in the arena. When he’s the last one standing, he removes his helmet. Daenerys catches sight of him. “Get him out of my sight,” he says immediately. Jorah tells her that he’s brought her a gift. Tyrion comes running out and reveals his name. Her eyes widen in surprise.

Cersei goes to see Margaery in her cell. She brings her a plate of food. Cersei informs her that they’re doing everything in their power to see to it that they are released, but she fears the Faith has left all reason behind. Margaery tells Cersei that she knows it was her that was behind it all.

Cersei visits the High Sparrow next. He meets her in an underground chapel, one of the oldest structures in the city. He says those who upheld the faith long ago did so without vanity, without the need for riches and grandeur. It was clean. It was pure. It was without finery. He says, “The Tyrell’s finery will be stripped away, their lies knocked down, their true hearts laid bare for all to see. And so it will be for all of us, high and low alike. What will we find when we strip away your finery?”

The High Sparrow tells her of a young man who came to see him and how he has absolved himself of his sins, etc. — and now he’s as free as a bird. The High Sparrow says that this young man had much to say about her. Lancel Lannister walks out from the shadows. Cersei goes to leave the room but a woman stands in her way. She doesn’t move.

Cersei’s thrown into a cell.

The Faith is overtaking the city.