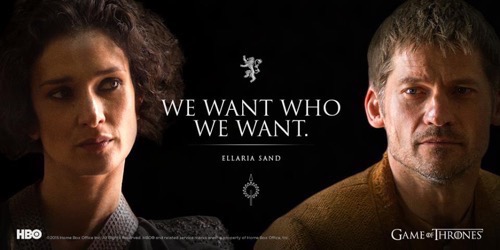 Tonight on HBO, Game of Thrones is back with an all new Sunday, June 14 season 5 finale called “Mother’s Mercy”. We’ve got your recap and finale spoilers down below! On this evening’s episode, Stannis [Stephen Dillane] marches. Dany [Emilia Clarke] is surrounded by strangers.

On last week’s episode, Stannis (Stephen Dillane) confronts a troubling decision. Jon (Kit Harington) returned to The Wall. Mace (Roger Ashton-Griffiths) visited the Iron Bank. Arya (Maisie Williams) encounters someone from her past. Dany (Emilia Clarke) reluctantly oversees a traditional celebration of athleticism. Did you watch last week’s episode? If you missed it we have a full and detailed recap, right here for you.

The ice thaws. Melisandre looks at the melting icicles and smiles. She seeks out Stannis and says that the Lord of Light has granted them what they asked for. They can march towards the Boltons occupying the North now unimpeded by cold conditions. One of Stannis’s commanders tells him that half of his men have abandoned him – taken horses and weapons, too. Another member of his army comes to find him with more bad news. He’s led into the woods where he sees his wife hanging in a tree. She killed herself, undoubtedly ridden with guilt after watching her daughter burn at the stake.

Just after Stannis tells one of his men to cut down his wife, another man comes to inform Stannis that Lady Melisandre was seen riding out of camp on horseback. Has she deserted her leader?

Stannis lets this news slide. “Gather the men,” he says. He gives the order to ride onto Winterfell.

Jon Snow talks with Sam about the zombie army he witnessed. They lost the dragon’s glass – but Jon informs Sam that dragon’s glass won’t do them much good unless they possessed a mountain of it. Sam then reminds Jon that he killed a Whitewalker with his sword. They realize that, perhaps, Valyrian steel also has the power to destroy Whitewalkers.

Next, Sam requests that Jon let him and Gilly leave The Night’s Watch. Jon, reluctantly, agrees. Sam wants to learn how to be a maester at the Citadel. Soon, Gilly and Sam leave the Wall.

Stannis and his army march towards Winterfell.

Meanwhile, Sansa breaks out of her room by picking the lock. Wearing a hooded cloak, she escapes to the tall tower with a candle.

Podwell, gathering fire wood, sees Stannis’s army approaching Winterfell. He immediately tells Brienne, who continues to wait for the candle in the tower’s window on the horizon. Frustrated, she leaves. As she leaves, the candle lights up the far off window. Sansa was successful, and while Brienne didn’t see it, it seems as if she’s going to march on towards Winterfell anyway.

Stannis informs his army that his siege will begin at sunrise, but one of his men says that there won’t be a siege. On the horizon, Bolton’s army rides fast and strong. Stannis and his army draw their swords, but the Bolton army is great in number.

Soon, Stannis’s army falls. Stannis, beaten and greatly injured, is alive – but for how much longer? He rests against a tree with his leg badly cut.

Brienne finds her way before him. Stannis asks if Bolton has women fighting for him. Brienne says that she doesn’t serve the Boltons. She informs him that she served Renly Baratheon and that she witnessed him die at the hand of a shadow demon with his face. Brienne says she knows it was Blood Magic. Stannis doesn’t argue with her. Brienne sentences him to death. She asks if he has any last words, but all he says is, “Go on, do your duty.”

She swings her sword. While it looks as if she killed him, we cannot be sure because the scene cuts immediately to Ramsay swinging his sword and killing an enemy.

Meanwhile, Sansa, after lighting the candle in the tower, tries to go somewhere safe; however, she’s stopped by Miranda, who pulls a bow and arrow on her. Reek stands beside her. Sansa says that if she’s going to die, at least let it be while there’s some of her left. Miranda says that she can’t die because Ramsay needs her to provide him an heir – but that doesn’t mean she can’t be hurt and roughed up a bit. Miranda’s about to shoot Sansa. But just as Miranda shoots her arrow, Reek pushes Miranda over the railing. She goes SPLAT. She’s very, very, very dead.

Ramsay and his men return. Reek takes Sansa’s hand and they walk over to the wall. They jump.

Meanwhile, Meryn Trant is whipping three girls with a wooden switch. He releases the other two, leaving one in his presence. As soon as the other two leave, he punches the one remaining girl in the stomach. She doubles over. Then, in a surprising move, she “pulls off her face.” Arya. With a small dagger, she lunges onto Meryn and stabs out his eyes, then proceeds to stab his chest. He bleed profusely. She gets up and says, “You were the first on my list, you know.”

Arya returns to the House of Black and White. She sneaks into the chamber of faces where she puts back the mask she used to disguise her identity. Jaqen is waiting for her there and says that she “took a life,” but that she took the wrong life. He tells her that that life was not hers to take and in doing so stole from the Many Faced God. Arya’s nemesis in the House grabs her Jaqen proceeds to uncork a vial of poison. With Arya’s mouth forced open, Jaqen proceeds to drink the poison. He falls over. Arya rushes over to him and cries. The girl who was holding her asks why she is crying. Arya says that he was her friend. The girl says, “No he wasn’t. He was no one.” Next, the girl standing there reveals herself to be Jaqen.

Arya bends down and begins ripping countless faces off the individual who just died. Soon, she sees her face resting on the body. Jaqen says that this individual was no one, just “as you should’ve been before stealing a mask.”

Arya’s vision begins to blur and she goes blind. She screams.

Jaime and Bronn leave with Myrcella and Tristane on a boat. Ellaria Sand apologizes to Myrcella beforehand – she gives her a big kiss on the mouth.

Below deck, Jaime has a serious talk with Myrcella. Jaime tells Myrcella that now, since she’s seen the world and has obtained new perspectives, perhaps she’ll be able to understand something that he’s been meaning to tell her for a long while now. She says that she knows what he’s trying to tell her. She knows about him and her mother being together. She knows that he’s her father – and she couldn’t be happier. She loves him. She gives him a hug. Once they separate, Myrcella begins bleeding profusely from her nostrils. On the dock, Ellaria Sand’s nose begins to bleed. She wipes off her lipstick with a small rag and tosses it into the sea. Next, she drinks a small vial of antidote from around her neck.

Daario and Jorah and Tyrion are in Daenerys’s chambers after she fled on her dragon. The three men suggest they need to locate Daenerys. The dragon and her fled north – of course.

Tyrion wants to tag along, but Jorah and Daario say that he’s probably not best equipped – with his skillset – to accompany them on an expedition of this nature. Daario does suggest that he stay behind in Meereen and rule the city in Daenerys’s absence – since his skillset would lend well to that.

Varys has found Tyrion. As Tyrion looks over the walls of Meereen, Varys approaches him. Tyrion asks him how he found him, but all Varys says is the “Birds sing in the east and they sing in the west.” Tyrion asks how he’s going to placate a city on the verge of civil unrest. Varys, with his vast network of spies and confidants, is of course willing to help Tyrion. They smile. Challenge accepted.

Daenerys and Drogon rest on a grassy cliff. Drogon isn’t being super energetic – or willing to carry her back to Meereen. He sits in a pile of animal bones.

Daenerys ventures off in search of some food. She hears a horse. Then she hears a stampede of horses. Thousands of people encircle her. She drops one of her rings into the grass.

Meanwhile, back in King’s Landing, Cersei continues to wither away in the dungeons. A woman comes in and orders her to confess.

Cersei kneels in front of the High Sparrow and he asks her if she’s willing to confess. She says that she is. She confesses to sleeping with someone outside of wedlock; however, she denies the rumors of incest and the fact that her children aren’t fathered by King Baratheon. The High Sparrow says that she will be place on trial. Until then, she can leave the dungeons. She’s free to go . . . after her atonement.

She’s bathed by the nuns, and then her hair is cut off. She’s naked and humiliated.

Next, she stands on the front steps in front of the city’s people, being charged with Falsehood and Adultery.

She’s unrobed and forced to walk through the city naked. Behind her, a nun walks and rings a bell while shouting “Shame.” She’s called names and peppered with foul projectiles.

Crying, bloody, and broken, she makes it to the the palace. Maester Qyburn puts a blanket around her. He summons a freakishly large man in gold armor. The man picks up Cersei. Qyburn says that this man, who we know to be the “science experiment” he was working on, has sworn a vow of silence until ALL of the queen’s enemies are destroyed.

Olly comes to get Jon Snow with important news. Jon Snow rushes outside and sees a sign that reads “Traitor.” He turns around and men of the Watch stab him in the stomach. Olly’s the last to run his knife through. “For the Watch,” everyone says.

Jon Snow falls to the ground. Blood spills on the snow.