Game Of Thrones Recap ‘The Dance of Dragons’: Season 5 Episode 9 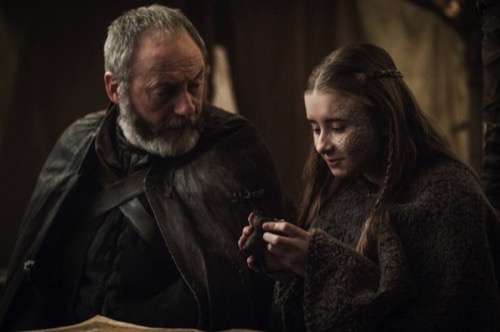 Tonight on HBO, Game of Thrones is back with an all new Sunday, June 7 season 5 episode 9 called “The Dance of Dragons”. We’ve got your recap down below! On this evening’s episode, Jon [Kit Harington] returns to the Wall; Arya [Maisie Williams] runs into someone from her past; Mace [Roger Ashton-Griffiths] visits the Iron Bank; Stannis [Stephen Dillane] faces a difficult decision; Daenerys [Emilia Clarke] oversees a celebration of athleticism.

On last week’s episode, Arya made progress in her training. Sansa confronted an old friend. Cersei (Lena Headey) struggled. Jon travels. Did you watch last week’s episode? If you missed it we have a full and detailed recap, right here for you.

Stannis and his army have set up camp. Melisandre is alone in a tent. A worried look crosses her face. She walks out into the camp. Suddenly, fires erupt, ravaging the tents and horses and food supplies. She looks on in disbelief. The next morning, Stannis discovers that twenty men rode into their camp to sabotage their efforts of marching North.

Meanwhile, Jon Snow, his crew, and the newly acquired Wildlings return to the Night’s Watch. They all find refuge there after their terrible, disastrous encounter with the ice zombies.

Stannis sends his King’s Hand, Davos, to Castle Black, where he instructs him to ask for more food and horses – all the supplies they require. Davos asks Stannis if he can take with him his daughter, as the march towards battle is no place for a young girl, but Stannis denies his request. Before he leaves, Davos goes to visit Shireen to tell her goodbye. She’s reading a storybook entitled ‘The Dance of Dragons.’

Jaime meets with Doran Martell and Ellaria Sand. Doran wonders why Jaime felt the need to sneak into Dorne if they had an alliance established. Jaime reveals that the Lannisters received a threatening message (Myrcella’s necklace in the jaws of a viper) and he was tasked with seeing the safe return of Myrcella to King’s Landing. Doran is unaware of this message, and he looks to Ellaria, who doesn’t hide her distaste for the Lannisters – or their rule – in the slightest. When Doran raises his glass and asks everyone to cheers in honor of King Tommen, Ellaria dumps her wine on the floor. Doran says that Myrcella may return to King’s Landing, so long as Tristayne accompanies her and is granted a seat on the small council. Jaime agrees to these terms, and he also negotiates Bronn’s release/freedom.

Arya continues her training in the House of Black and White. She maintains her disguise as an oyster salesgirl and, in the streets of Braavos, proceeds over to the Gambling Man, whom she’s supposed to poison. The man calls for her business; however, Arya notices a small boat pull up to the dock. It’s Mace Tyrell, who’s going to visit the Iron Bank. She follows him and the people guarding him.

The man who accompanied Lord Tyrell to the bank eventually finds himself in a brothel. Arya has followed him there. The man only wants to sleep with very young girls. Arya leaves and returns to Jaqen. She tells him that the Gambling Man wasn’t hungry today, but maybe he will be tomorrow.

Back in Dorne, Ellaria is forced to either swear her allegiance to Doran or die. She kisses his ring and chooses life. Later, Ellaria finds Jaime. In a sense, she apologizes to him, saying that she understands Myrcella had no part in Oberyn’s death. She also says that she knows Myrcella is Jaime’s daughter and that the world shouldn’t shame a person for loving whom they choose to love – she’s talking about his relationship with Cersei, of course.

Stannis visits Shireen in her tent. She continues to read ‘The Dance of Dragons.’ She tells her father about it. They start talking about the upcoming war and what people have to do in order to become who it is they’re truly meant to be – born to be. She asks him if there’s any way she can help. He says that there is. She says, “good,” and gives him a hug. As they embrace, Stannis says, “Forgive me.”

She’s led to a wooden pyre. Melisandre greets her and orders her to be tied to the pyre. Shireen screams for her life as the fire’s lit. Melisandre offers this sacrifice to the Lord of Light, begging that he light their future path and provide them with the things they need. Shireen’s mother doesn’t want to go through with it, but the army stop her when she tries to run to her daughter.

Meanwhile, on Meereen, Danerys and her future husban reopen the fighting pits to glorious fanfare. She starts the game with a clap of her hands. After the first fight is finished, two more competitors are brought out. One of the fighters is Jorah. Despite her shock, Dany gives her clap to start the battle. After much fighting, Jorah proves himself the victor. He stands before Dany.

He launches a spear into the stands. The spear strikes a Harpy, who was going to attack Dany.

Countless Harpies, each donning their iconic gold masks, rise in the stands and begin slaughtering citizens of Meereen.

Jorah and Daario attempt to help Dany escape. They jump into the fighting pits looking for a way out, but all exits are quickly sealed.

An army of Harpies proceeds into the pits. They surround Dany, Daario, Tyrion (her new advisor), and Jorah.

The fighting continues. Daenerys and Co. aren’t sure what to do. Soon, however, Drogon swoops in. The dragon takes out a great deal of the Harpies, but the Harpies fight back with their spears, and Drogon takes a few hits. Daenerys approaches her killer beast, touches the dragon’s face. Next, she climbs onto Drogon’s back. She says, “Fly,” in her native tongue.

And Daenerys freaking rides her dragon outta this place. Everyone looks at the queen in awe.