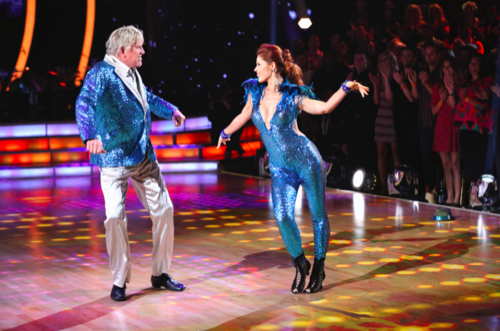 Tonight on ABC Dancing With The Stars returns for a second week and Gary Busey and his professional dancing partner Anna Trebunskaya danced a Paso Doble routine. On tonight’s episode the 13 couples dance to a song that commemorates the celebrity’s hometown. Did you watch tonight’s episode? If you missed it we have a full and detailed recap, right here for you. Did you miss any of tonight’s performance videos? If you did we have them all, right here for you!

On last week’s premiere episode of DWTS Gary performed a Cha Cha Cha and the judges scored Gary a 15/30 for her performance. Julianne Hough loved his performance and had this to say, “Gary you are larger than life and we don’t want you to stop. I’m not sure how much of a cha-cha that was but you stole our hearts, and hopefully you stole America’s hearts too.”

Judges’ comments on Gary’s 2 Week Paso Doble: Carrie Ann: “Intensity check, lots of checks but no Paso Doble. You were out of your element, but it was still fun to watch.” Julianne:“You are having so much fun, we can’t but smile and root for you. I was a little intimated that you were going to forget your steps. I love the entertainment.” Bruno: “You went monumental with splendor, but the steps were off kilter. I look forward to seeing next week.”

Watch the video below and let us know what you think, do you agree with the judges comments? Do you think Gary did enough to avoid elimination tomorrow? Sound out in the comments and let us know your thoughts?