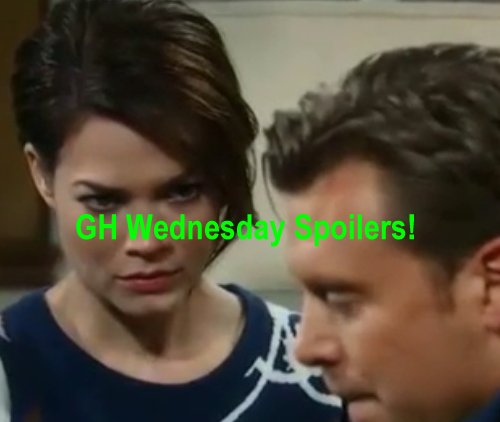 “General Hospital” (GH) spoilers for the Wednesday, November 2nd episode show that Patrick Drake (Jason Thompson) and Sam Morgan (Kelly Monaco) may be on the cusp of falling apart after Sam refuses to move forward with her divorce.

Patrick wants to know why Sam can’t let Jason Morgan (Billy Miller) go now that she knows Jason can’t get his memories back. But Sam has tunnel vision about the Liz Webber (Rebecca Herbst) secret and is willing to let her life with Patrick fall apart.

Meanwhile, Jason won’t let his life with Liz crumble. Jason is shocked when Liz hands back the engagement ring. Looks like Carly Corinthos (Laura Wright) put a scare into Liz about Jason leaving her eventually but Carly could be wrong.

Jason will tell Liz he loves her, doesn’t care about past Jason and wants to be with her. He reconfirms all his feelings for her and there’s a chance we can see a new proposal – from Jason this time instead of Jake Doe. But Liz is still worried.

And well she should be. Laura Spencer (Genie Francis) runs to warn Nikolas Cassadine (Tyler Christopher) that Sam is close to figuring out that the three of them knew Jason’s identity for a while. Nikolas is not in a good place right now.

Alexis Davis (Nancy Lee Grahn) telling Nikolas that he inherited Helena Cassadine’s (Constance Towers) ruthlessness may be apt. Nikolas will snap and say some things that will scare Laura – has grief pushed Nik into uber-Cassadine mode?

Hayden Barnes (Rebecca Budig) goes behind Nik’s back to meet with Tracy Quartermaine (Jane Elliot) to talk about their ELQ plot. Tracy knows that Jason being alive changes the stock ownership ratio and could help force Nikolas out of ELQ.

Hayden and Tracy finish their scheming then Hayden needs to meet with her other secret partner Curtis (Donnell Turner) to get an update on her shooting investigation. Hayden is closing in on the facts about the attempt on her life.

Carly and Michael Quartermaine (Chad Duell) also need info – from Dr Andre Maddox (Anthony Montgomery) about Morgan Corinthos (Bryan Craig). They should not expect good news – but is it bipolar or something worse?

Morgan is off the rails raging against his dad Sonny Corinthos (Maurice Benard). Seems Sonny wants to take Morgan somewhere he doesn’t want to go. Is Sonny trying to get him back to his hospital bed or all the way to Shadybrook?

Carly had a busy day – threatening first Liz and then Franco (Roger Howarth) both over Jason. Will Franco take her words to heart and decide to come at Jason before he comes at him? Perhaps Franco can explain things away.

Franco, after all, had a brain tumor when he hurt Jason’s loved ones – and Jason now has amnesia. Can Franco work out a proactive peace deal with the reformed killer? And will it stick if and when Jason’s memories come back?

Also is Franco about to be kicked out of his new hospital job? The arrest against him was false and the charges dropped, but you never know. Could “General Hospital” lose its new art therapist again? Fingers crossed he can keep his gig.

Speaking of jobs, will Dillon Quartermaine (Robert Palmer Watkins) get an offer? After Dillon tells Maxie Jones (Kirsten Storms) he’s heading for LA, she may make an offer to tempt him to stick around. Is this part of the plan for a new Crimson?

And Maxie will chat up Lulu Spencer (Emme Rylan) soon and find out that Lulu caught Dante Falconeri (Dominic Zamprogna) with Valerie Spencer (Brytni Sarpi). But will Lulu also run into Dillon with revenge on her mind?

All this and more on the Wednesday, November 2nd GH – watch then come back to CDL for tons more “General Hospital” spoilers and gossip!