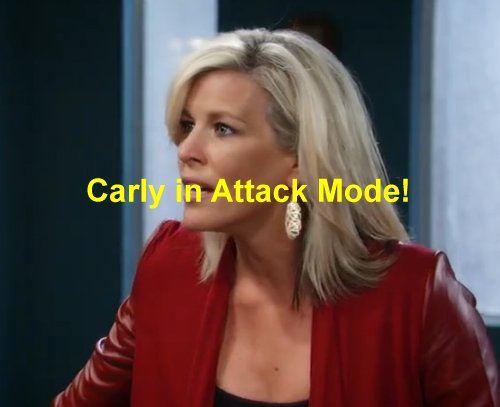 “General Hospital” (GH) spoilers hint that Carly Corinthos (Laura Wright) will be on the warpath soon against four women who have hurt her loved ones – Liz, Sabrina, Ava and Valerie. We’ve already seen Carly attack Liz Webber (Rebecca Herbst) but she’s not near done.

After Carly cornered Liz at the hospital, Liz tried to let Jason Morgan (Billy Miller) out of their engagement. Not only did Jason refuse, but he recommitted and told her not to let Carly get to her. Jason will confront Carly soon about meddling in his love life.

Of course, Carly has always interfered, but Jason doesn’t know their history and sees her as an annoyance. Carly is an acquired taste and this new Jason has not built up a liking for her scheming ways. After Jason calls her out, Carly will be upset.

No way will Carly back off just because Jason asked her to, but she may develop new tactics to make it less obvious. Look for Carly to partner up with Sam Morgan (Kelly Monaco) to find another way to take down Liz and get Jason away from her.

Carly has already made it clear that she doesn’t think Sabrina Santiago (Teresa Castillo) is the one for Michael Quartermaine (Chad Duell) and isn’t happy the pregnancy chains Michael to Sabrina forever. But wait ‘til Carly finds out Sabrina is lying!

Once the truth comes out – and it will – that Sabrina is carrying the child of arch-enemy Carlos Rivera (Jeffrey Vincent Parise), Carly will go nuclear and will stop at nothing to get Sabrina out of Michael’s life for good. Could Carly scheme to reunite him with Kiki Jerome (Hayley Erin)?

The problem is, Carly ordering Michael to break up with Sabrina or being terrible towards Sabrina will raise Michael’s hackles and he’ll very likely defend Sabrina. After all, Sabrina is doing the same thing that Carly did when Michael was a baby – trying to protect her child.

Carly is not near done with Ava Jerome (Maura West). From Carly’s perspective, Ava has a laundry list of sins she’s yet to be held accountable for – shooting Connie, hooking Morgan on gambling, seducing Morgan, and plotting to take out Sonny Corinthos (Maurice Benard).

Never mind that Sonny is just as bad (or worse) than Ava – the biggest transgression of all is taking baby Avery from Sonny. In coming days, look for Carly to work on a scheme to discredit Ava and get Avery back in Sonny’s hands for good. But can Carly do this?

Carly is unaware that Paul Hornsby (Richard Burgi) is working with Ava and targeting Sonny. Paul won’t sit idly by and let Carly take down his partner-in-crime. And Paul may yet be the most ruthless guy in town – has Carly met her match in the new criminal DA?

In the all-out Spencer war over the Dante Falconeri (Dominic Zamprogna) cheating triangle, expect Carly to take the side of Lulu Spencer (Emme Rylan) over Valerie Spencer (Brytni Sarpi). If Lulu comes to Carly for advice, no doubt Carly will tell her how to take out her rival.

And if Carly runs into Valerie, expect her to give her an earful for man-stealing, cheating and trying to break up Dante and Lulu. Even if Valerie defends herself saying the duo were already breaking up, Carly won’t listen. Carly could make serious trouble for Val.

Again, the problem with Carly attacking these women is that her vindictiveness could inspire the men in their lives to defend them. Carly’s plan could backfire and Dante could grow closer to her to shield Valerie. Will Dante tell Sonny to get his wife to back off.

Will Carly win or lose big?

It seems like Carly has enough to focus on at her own house without going after these other women. Sonny is in a wheelchair and needs support and Morgan Corinthos (Bryan Craig) is just coming off a bipolar diagnosis and is still adjusting.

Why doesn’t Carly just back off, mind her own business and take care of her husband and son? If she goes about it the wrong way, Carly could push Liz and Jason closer, Michael and Sabrina closer, Dante and Valerie closer – and cost Sonny his child for good.

What do you think GH fans? Should Carly back off and let her loved ones fight their own battles? Or should Carly do what Carly always does and meddle to her heart’s content no matter who she hurts in the process? Share your thoughts in the comment section below.

And be sure to check back with CDL daily for more “General Hospital” spoilers, gossip and news.