General Hospital (GH) Spoilers: Lulu Revenge Romance – Will Lulu Bed Dillon, Johnny (or Both) to Get Back at Dante? 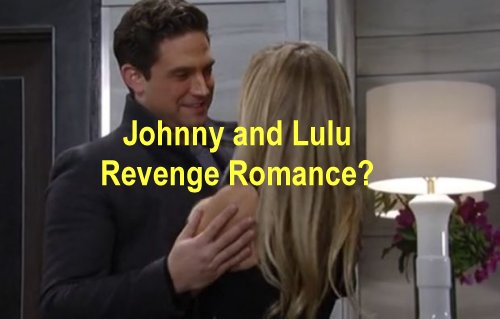 “General Hospital” (GH) spoilers reveal that Lulu Spencer (Emme Rylan) will catch Dante Falconeri (Dominic Zamprogna) cheating again. A revenge romance may be just what Lulu needs to get her over Dante’s shenanigans.

Valerie Spencer (Brytni Sarpi) slept with Dante and spent the night at their loft on Thanksgiving. Lulu will catch them when she comes back to try and patch things up with Dante but will get a nasty shock when she shows up.

Dante and Lulu will have a nasty blow up and, with Lulu’s pride wounded and her marriage destroyed, what will she do next? “General Hospital” spoilers tease that Lulu will soon embark on a revenge romance, but the big question is – with whom?

Dillon Quartermaine (Robert Palmer Watkins) is the likeliest choice. The last time Lulu was this mad at Dante, she and Dillon almost shagged. After Lulu is hurt again by Dante’s cheating, will she go all the way with Dillon this time?

Dillon will break the news to Lulu he’s leaving for LA. Will the thought of Dillon leaving plus all of Lulu’s jealousy and anger finally be enough to get her into Dillon’s bed? Maybe… But what about Johnny Zacchara (Brandon Barash)?

The wanted man is headed back to Port Charles soon, so Johnny could rekindle things with Lulu. “General Hospital” spoilers hint that Johnny and Lulu will share a storyline when he returns, so perhaps it’s a romance.

The problem with Dante turning to Valerie when he’s upset and Lulu turning to Dillon (and possibly Johnny) is it makes everything worse. Fans still hope Dante and Lulu will put this behind them soon, but a reconciliation looks far away.

Valerie is thrilled to be back in Dante’s life (and bed) and won’t easily take her claws out of Lulu’s man. Plus, did those pregnancy rumors give Valerie an idea? Will Valerie toss out her birth control pills so she can get knocked up and keep Dante?

A baby would tether Dante and Valerie indefinitely and would drive infertile Lulu crazy – and could cause her to do something rash. Remember Dante checked with a lawyer to ask if Lulu could use the embryo without his approval. Could that happen?

If Val got pregnant, would Lulu implant the embryo to compete with Valerie on a baby vs baby basis? The bottom line is, Lulu thinks she’s lost her man to her scheming cousin Valerie, so expect to see Lulu lash out, likely with a new man.

Not only would a revenge relationship boost Lulu’s faltering self-esteem, but it would drive Dante crazy! And with what he’s been doing with Valerie, it seems like he deserves a little jealousy and heartache in return.

Check back with CDL often for daily “General Hospital” spoilers, news and more!