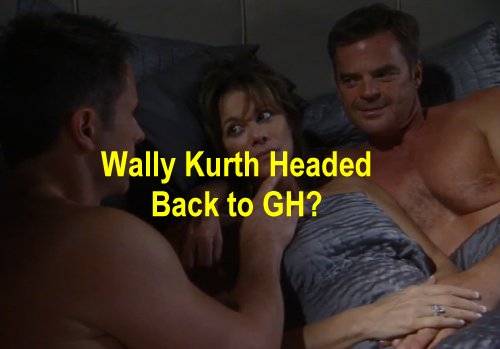 “General Hospital” (GH) spoilers may soon bring news that Ned Ashton (Wally Kurth) could be heading back to Port Charles now that he is reportedly off contract with “Days of Our Lives.”

Some fans may think there is no room for Ned now that he broke up with Olivia Falconeri (Lisa LoCicero) but think again! Sure Ned and Olivia may be done – but NedLiv is not all the action in town.

“General Hospital” spoilers tease that Olivia may soon be getting much closer to baby daddy Julian Jerome (William deVry) and that could open a romantic opportunity for Ned. Let’s face it – kids are a sore spot for Julian.

He never got to raise any of his own. Lucas Jones (Ryan Carnes) was adopted and raised by Bobbie Spencer (Jacklyn Zeman) and Tony Jones (Brad Maule). And Sam Morgan (Kelly Monaco) had neither parent.

The opportunity for Julian to be hands-on raising his new son Leo is huge. If Julian got a shot to be a full-time dad by developing a deeper relationship with Olivia, he might let Alexis go because this chance won’t come around again.

If Alexis Davis (Nancy Lee Grahn) breaks it off with Julian because he’s getting in too deep with Olivia, Ned would be her obvious rebound. Plus, Alexis isn’t above being spiteful and since Ned dumped Olivia, it would be a double revenge romance.

“General Hospital” spoilers have hinted that the Quartermaine family Christmas will be a big deal this Christmas. Wouldn’t it be amazing if Tracy Quartermaine (Jane Elliot) had both sons home for the holidays plus Jason Morgan (Billy Miller) there.

Also, there’s a huge holiday gala being planned for “General Hospital” that’s a Toys for Tots benefit that will be organized by Tracy with some help from Paul Hornsby (Richard Burgi). Wouldn’t you love to see Eddie Maine take the stage?

We know from a recent Good Morning America behind the scenes visit on the GH set that the gala filming is underway, so maybe Kurth could still have a chance to be part of some of the holiday scenes. Fingers crossed…

Let’s hope that Ned will be back soon – he can romance Alexis, help the Qs win back ELQ from Nikolas Cassadine (Tyler Christopher) and welcome Jason back to the fold. DOOL and Salem’s loss would definitely be GH and Port Charles’ gain!