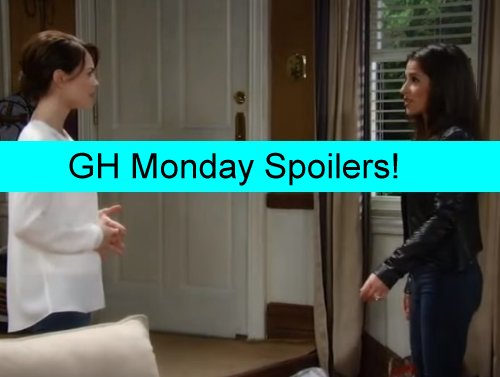 “General Hospital” (GH) spoilers reveal that Liz Webber (Rebecca Herbst) is about to pay for her months of lying to Jason Morgan (Billy Miller). Sam Morgan (Kelly Monaco) has the dirt that Liz has been trying to hide and doesn’t hold back.

Liz does the only thing she can – she keeps lying. Then the confrontation will devolve into an insult-slinging brawl between Liz and Sam. Liz knows she’s been caught but when someone’s back is against the wall, they try anything.

Meanwhile, Jason runs into Carly Corinthos (Laura Wright) at Kelly’s and Carly once again tries to get him to turn away from Liz and reconcile with his wife Sam. Jason has had enough of Carly and tells her to butt out of his life.

Jason goes on to say that the wedding with Liz is on, he’s divorcing Sam, and Carly needs to step off because nothing will stop him from marrying his fiancée. Hope Jason didn’t fill up at Kelly’s because he’s about to eat his words.

Jason comes home to find the all-out war between Liz and Sam. Jason breaks it up then wants to know what’s going on. Sam tells Liz to come clean to Jason right now. Liz prevaricates and Jason takes his fiancee’s side over over his wife’s.

Jason kicks Sam to the curb and Liz can breathe a sigh of relief – for about a minute. Too bad something Sam said took hold in Jason’s addled brain… Sam will leave frustrated and angry but things may turn for her soon – at least with Jason.

Anna Devane (Finola Hughes) and Mac Scorpio (John J York) have begun to piece together some of what devilish DA Paul Hornsby (Richard Burgi) has been up to, but they have no idea the extent of his doings. Anna and Mac figure out how to proceed.

Paul also has to figure out what to do about Anna now that he suspects she may be on to his dirty deeds. Will Paul take care of her like he took care of Sloane? Also, is Carlos Rivera (Jeffrey Vincent Parise) gone for good? Likely not.

Across town at GH, Sonny Corinthos (Maurice Benard) will have a good news/bad news day. First the bad news. Sonny is sick of that wheelchair and wants out of it but his body is not cooperating. Sonny wants someone to blame.

He targets his rage on Patrick Drake (Jason Thompson) since he’s the doctor. Sonny rails at Patrick who has had enough of the whiny baby mobster. Patrick tells Sonny go ahead and get a new doctor and see what you get then.

We know Sonny will need a new one soon since Patrick is leaving town within weeks – but Sonny doesn’t know that. Where’s Epiphany Johnson (Sonya Eddy) when you need her. She seems to be the only one who can deal with Sonny.

On the good news side, Sonny finds out something about Ava Jerome (Maura West) that makes him think he can renew the custody battle and get Avery back. What could it be? Did someone spot that giant crate of guns in the Jerome Gallery?

Julian Jerome (William deVry) stops by the gallery and finds Ava on a sneaky phone call and asks what she’s up to. Julian warns Ava she’s playing with fire since Sonny will be watching her like a hawk because of the custody war.

All this and more on the Monday, December 7th episode of GH. What do you think GH fans? Are you ready for Liz to get what’s coming to her? Watch the show then check back with CDL for more “General Hospital” spoilers, gossip and more!