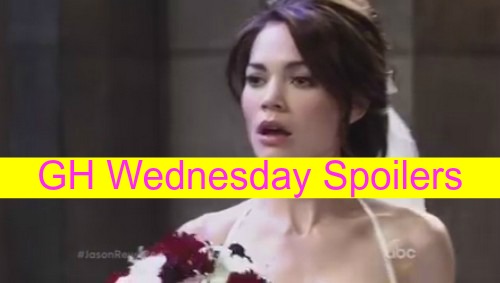 These “General Hospital” (GH) spoilers cover the morning of their wedding day that will air on November 4. It’s the day of Liz and Jake’s wedding starting Wednesday. Liz Webber (Rebecca Herbst) and Jake Doe (Billy Miller) wake happy and in love on their wedding day.

Too bad the day won’t end so well… At what point will Jake check his messages and hear the desperate call from Carly Corinthos (Laura Wright) demanding that he call her ASAP? When Jake calls, if Carly’s phone did survive the wreck, she won’t be able to reach it since it went flying down into the floorboard of her car. Carly will be in desperate need of rescuing today.

Kiki Jerome (Hayley Erin) will wake with a wicked hangover today – how much will she remember about her actions on Halloween night after she left The Haunted Star? Will Franco (Roger Howarth) see that his car is banged up and know she wrecked?

Franco confronts Kiki and wants to call the police but likely Kiki will be able to dance on Franco’s heartstrings and talk him out of busting her out to the cops. Morgan Corinthos (Bryan Craig) stops by to make sure that she’s okay and will hear about the wreck.

Morgan will extend an olive branch of friendship but how understanding will he be once he finds out Kiki ran his mother Carly off the road and could have killed her because of her drunk driving? And an aside, have the new writers totally dropped Morgan’s bipolar storyline?

Was that a Ron Carlivati thing that they’ve discarded? I don’t miss it necessarily, but it’s curious that it’s just gone away and Morgan seems fairly functional and is making much better choices (for a guy of his age, anyway).

Other Corinthos family drama is going on over at GH with Michael Quartermaine (Chad Duell) and Sonny Corinthos (Maurice Benard). Michael tells his dad that Sabrina Santiago (Teresa Castillo) refuses to marry him despite the baby they’ve got brewing.

Sonny won’t like this and wonders why Sabrina wouldn’t want to be married to her baby daddy when their baby comes. Will Sonny’s questions prompt Michael to ask Sabrina uncomfortable questions?

It will hurt Lulu more that no one that knew gave her a heads up and instead let her be publicly humiliated. Olivia will feel terrible for Lulu but if she tries to defend Dante’s actions, Lulu may go off on her. Lulu is a little angry loose cannon right now!

When Valerie Spencer (Brytni Sarpi) stops by to check on Lulu, she finds just Dante there. Dante is in major guilt throes and is accepting 100% of the burden for their one night stand and for Lulu’s anger. Dante just wants his marriage back together.

Looks like Valerie really is over Dante, but if Lulu shows up to pack a bag or pick up some of Rocco’s things and finds them alone in their loft, she is going to fly off the handle and there will be no getting Lulu to listen to reason.

Carly is in danger but how long will it take her loved ones to realize she needs help? Jake will look for Carly in response to her urgent message. Will he call Michael or stop by the hospital assuming she’s there with Sonny?

Whatever triggers the realization that Carly has gone missing, Michael, Sonny and Jake will all be worried about her and Sonny can’t do anything to find his wife since he’s a prisoner of his paralysis. How frustrating must that be? It’s up to Jake to find her.

The next three days will all be the wedding day so there will be lots of action even though little time will pass in terms of calendar days. Don’t miss a moment of all the action leading up to the big reveal and come back to CDL often for daily detailed “General Hospital” spoilers, news and more.