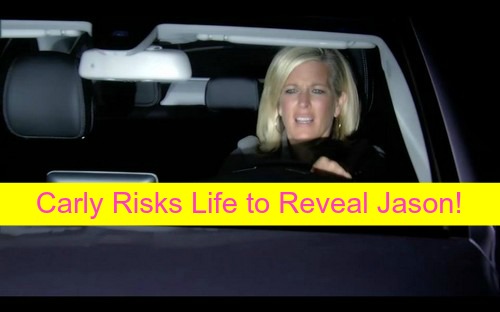 “General Hospital” (GH) spoilers reveal that the wedding of Liz Webber (Rebecca Herbst) and Jake Doe (Billy Miller) will have far-reaching implications for many residents of Port Charles. And one person that will be impacted – potentially at risk to her life – is Carly Corinthos (Maurice Benard).

We all know that Carly will go above and beyond when it comes to protecting those she cares about, but it usually doesn’t mean her literally risking life and limb…

What we do know, though, is that Carly may come close to losing her own life while trying to give Jake back his real one. On today’s show, Carly should get back the DNA results on Jake to confirm that he’s really Jason Morgan.

A closer relative would be nephew Michael Quartermaine (Chad Duell) – but closer still would be little Jake Spencer (James Nigbor) or Danny Morgan since they’re Jason’s kids. But we only saw Carly dropping off the water bottle with the doc, not anything else.

Maybe Carly will mention who she matched him with today… Nonetheless, Carly gets the confirmation she needs and runs off to find Jake. So why isn’t Jake answering his phone? Or does Carly just feel like this is face-to-face news?

Guess she can’t just send a text like “BTW, u r Jason Morgan”. Is there an emoji to reveal that you’re back from the dead and married with kids already? Is that a string of skull, bridal veil and baby emoji? No matter, for whatever reason, Carly is in her car and on a quest to find Jake to tell him he’s Jason and shut down the wedding when she meets with catastrophe.

We already know Carly has bad luck with moving conveyances… She was in a “fatal” car crash that resulted in her own fake funeral.

Then later she was in a multiple car crash with Jason where she broke her wrist and, oh yeah, she was also in a train crash. Seems like she needs a 24/7 bodyguard and driver because she can’t get herself from point A to point B with any sense of personal safety.

And so it will be with this week’s events. It looks like Carly will be involved in another near-fatal car crash that will leave her missing and her family worried. When Carly goes missing, the rest of her family freaks out, including Jake.

What seems most likely is that it will be Kiki Jerome (Hayley Erin) that will nearly kill Carly. Kiki is boozing excessively at The Haunted Star party and, after she finds out that Morgan Corinthos (Bryan Craig) hooked up with Darby Colette (Jesica Ahlberg), Kiki will stagger out of the party and into her car.

The new co-writers love to do foreshadowing and last week we saw Franco (Roger Howarth) take away Kiki’s keys because she was drunk – even before she started boozing at The Haunted Star.

The big question is whether Kiki will keep on driving oblivious to the damage she’s caused and head home to Franco and Nina Clay (Michelle Stafford) or if she’ll also crash and be in peril in her car. Drunks usually survive so we feel like Kiki will walk away from this safe and sound.

Carly, however, will not be so lucky. She will be really banged up. Will Jake come to her rescue yet again? Will Jake show up to the church with Carly by his side and announce to Liz and all assembled that he knows his identity?

Or will it be a battered Carly that staggers into the church with the wedding underway and interrupts? It doesn’t seem like Jake would give up on the search and go to the ceremony without his best woman at his side. Plus Jason is always rescuing Carly, so let’s hope he does it again.

Either way, Carly will make it to the church to keep her BFF from making a huge mistake by marrying Liz while his real wife Sam Morgan (Kelly Monaco) is sitting just a few feet away. And when Jake’s life spins out of control because he finds out he’s Jason Morgan but has no memories of his former life, it will be Carly that’s there by his side helping him find his way. It’s great to think about Jason and Sam reunited but Carly and Jason reunited is pure BFF magic.

Don’t miss a moment of the wedding action this week and check back with CDL often for more “General Hospital” spoilers, wedding news and more.