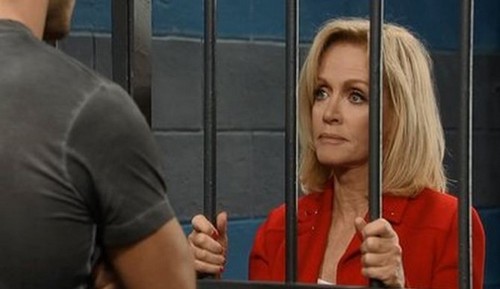 First, Ned Ashton (Wally Kurth) is leaving Port Charles to head to Salem. Kurth is reprising his role as Justin Kiriakis on Days of Our Lives. Like most transfers from soap to soap, it’s likely that we’ll see Kurth back as Ned at some point in the future, but for now, he will leave PC alongside Olivia Falconeri (Lisa LoCicero). Olivia leaves PC to get her new son away from Julian Jerome (William deVry).

Ned and Olivia leave town, but LoCicero is not taking on a new role, she’s taking maternity leave since she just had a baby in real life too. The good news is, she’ll be back by mid to late summer! Also taking the summer off is Anna Devane (Finola Hughes). Finola is directing her second feature film, this one titled Byrd and the Bees. She’s filming in Scotland and is taking Ian Buchanan along with her.

Anna is dealing with the loss of Duke Lavery and can’t get in touch with daughter Robin Scorpio (Kimberly McCullough) so she’ll leave with Duke’s ashes and go to Paris to check on her daughter. Hughes will be back at summer’s end once her film is done shooting and hopefully Anna will come back to Port Charles with an exciting new storyline and will start a romance with Sloane (Grayson McCouch).

And, of course, Buchanan is leaving and that’s why Duke was shot and killed and we just saw his funeral service. There have been some rumors that he may head over to The Bold and the Beautiful to reprise his role as Dr James Warwick. But, so far, there are no confirmations. There’s also a project in the works to revive Twin Peaks and Buchanan was in talks for that as well. He insists he’s done with Duke for good – but we’ll see.

Another actor who says he’s completely done with GH is Anthony Geary. The actor has been struggling since he had back surgery last year and joked that he didn’t want to collapse in a heap and die on the ABC soap set. With eight Daytime Emmys and 37 years on “General Hospital” under his belt, Geary has certainly earned his retirement. He plans to relocate to Amsterdam full time – he has split his time between a home there and the US for years.

But we’ve still got some more Luke Spencer screen time to come. He’ll film through June when his contract ends and Geary’s final scenes will play for a while after that. Luke will be (or has been) remanded to a psychiatric facility soon since he avoided criminal prosecution for Fluke’s actions. Hopefully there will be some poignant goodbyes filmed with Tracy Quartermaine (Jane Elliot), Lulu Spencer (Emme Rylan) and Bobbie Spencer (Jacklyn Zeman).

There are “General Hospital” rumors circulating that absent son Lucky Spencer (Jonathon Jackson) will come back to town for a brief visit – likely to say goodbye to his on-screen dad. Jackson, of course, is busy on ABC nighttime drama Nashville but, since that season ended recently, he has time to head to the GH set to film a few dramatic scenes before Lucky leaves town again – perhaps with Liz Webber (Rebecca Herbst) in tow, if certain rumors come to fruition…

Also exiting “General Hospital” are Damian Spinelli (Bradford Anderson) and Ellie Trout (Emily Wilson). Turns out, they just stopped by for the Nurses Ball and to amp up the intrigue and insert some tension in Maxie Jones’ (Kirsten Storms) and Nathan West’s (Ryan Paevey) relationship. Those two will head back to Portland soon and my one question is whether they will take baby Georgie (Harper Rose Barash) with them. It would be a bummer if Storms didn’t get to bring her baby to set anymore!

And now to the new and returning cast members. “General Hospital” showrunners announced that they have lured Laura Spencer (Genie Francis) back to the show for a while. It makes sense that they’d bring her back to say goodbye to ex-hubby Luke, but you have to wonder if she’ll stick around for a bit. Perhaps her return will be short lived and she will also exit with screen son Lucky as well.

Madeline Reeves (Donna Mills) is also headed back according to “General Hospital” news and this means the Nina Clay (Michelle Stafford) storyline is about to blow up in a big way. Remember, Liesl Obrecht (Kathleen Gati) recently told her niece Nina that there are some skeletons in her closet that Nina herself doesn’t know about. We think this is about the baby that Nina supposedly miscarried while in her coma.

But, likely, the baby was born and given up for adoption in a sister scheme between Madeline and Liesl. Nina will find out her child lived and will go searching for it. The big question is whether it will be someone in town or a new character that will be introduced. It almost has to be someone new since we know the paternity of all the characters of an age to be Nina’s offspring. That also means Silas Clay (Michael Easton) will get involved as the baby daddy of their grown child.

Finally, GH showrunners have announced that a former character will be recast. Our money is on Sarah Webber. Some “General Hospital” rumors are swirling that Sarah will show up in town just in time for sister Elizabeth to leave with Lucky so that writers can add new life in that age group of characters. This will be after the obviously-headed-for-doom storyline between Jake Doe (Billy Miller) and Liz blows up in her face and her lies are revealed. Sarah is a doctor, so it seems like a fit.

Be sure to come back to CDL often for more “General Hospital” casting news, gossip and spoilers!