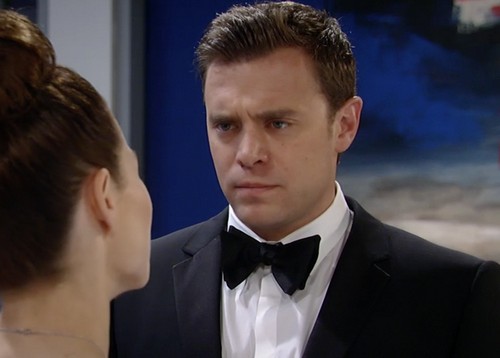 General Hospital spoilers and casting rumors explore the possibility that Rebecca Herbst is leaving GH because she dislikes Billy Miller. If you watched General Hospital on Friday May 8, you saw that Liz Webber (Rebecca Herbst) and Jake Doe (Billy Miller) finally made love. Did anyone else notice how awkward and passionless the sex scene was? For something that had been building for so long, you would have expected fireworks, but it looked like Rebecca Herbst could barely stand to be touching Billy Miller.

By comparison, when Nikolas Cassadine (Tyler Christopher) and Hayden Barnes (Rebecca Budig) are fooling around, they are all in. You can tell they are really kissing and are having fun with the scene. The long-awaited scene between Herbst and Miller was a dud – especially when you compare it to the electrical tension between Herbst and former the Jason – Steve Burton.

In fact, before Jason was resurrected as Jake, “General Hospital” rumors indicated that Rebecca Herbst was planning on leaving GH for something different. Then when the Jason resurrection storyline was created, Herbst agreed to stay until it was revealed that Jake is Jason. Other rumors abound that Herbst thinks Billy Miller is unprofessional and hates working with him.

If their love scenes are any indication, it seems like neither can stand the other. When they are acting in separate scenes, discussing Liz’s affection for Jake, it’s very convincing – they’re both accomplished actors, after all. But once they have to touch each other, it just looks awkward. It seems like Herbst was trying to keep her mouth closed tight yet still look like they were lip locked.

Obviously, once Jake’s true identity as Jason is revealed, Liz won’t be able to keep him since Jason will go back to Sam Morgan (Kelly Monaco) and their son Danny. This will free Herbst up to leave the General Hospital show – Liz will be hated by Sam, Carly Corinthos (Laura Wright) and everyone who will be furious that she knew who Jake was and instead of telling them, took him to her bed selfishly.

That will allow GH show runners to set up an exit as Liz leaves town in shame or other circumstances that leave her a window to come back if Herbst changes her mind. “General Hospital” spoilers and rumors indicate that Lucky Spencer (Jonathon Jackson) and Liz’s sister Sara Webber are slated to come back this summer briefly. Jackson is busy on ABC hit show Nashville so he won’t have time to appear for long.

Perhaps Liz will leave with her long-time love Lucky. That will allow her to exit GH gratefully. It will also breathe new life into the 20-30 something set in Port Charles with the arrival of Sara. Hopefully, the Jason identity thing will break loose soon so we don’t have to keep watching awkward sex scenes between Jake and Liz.

What do you think? Do you see any heat between Herbst and Miller? Come back to CDL for more General Hospital spoilers, rumors and news. Share your thoughts in the comments!