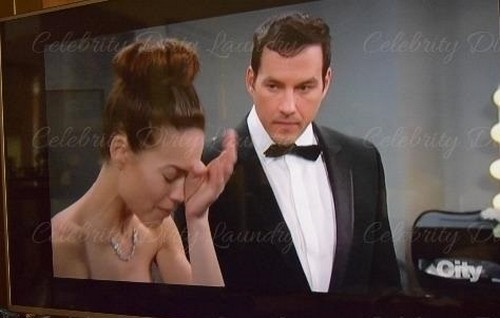 “General Hospital” spoilers have teased for months now that Jason Morgan’s identity would be revealed during the 2015 Nurses’s Ball – and it was, but only to Elizabeth Webber (Rebecca Herbst). In an ironic twist that we all should have seen coming a mile away, Liz opted to keep Jake’s true identity a secret and did not share the fact that Jason Morgan was alive and well in Port Charles with anyone – not even Jake himself! In just one short week Elizabeth Webber has morphed into easily one of the most hated women on daytime television.

When “General Hospital” spoilers first confirmed that Billy Miller was headed to the ABC soap to revive the character of Jason Morgan, GH fans were thrilled and couldn’t wait for Morgan to be reunited with the other half of his super-couple Sam (Kelly Monaco). We all patiently waited for the highly-anticipate “JaSam” reunion. But, when Billy Miller finally made his “General Hospital” debut, it was as Jake Doe – Jason Morgan had lost his memory and was under mind-control via a micro-chip from Helena Cassadine (Constance Towers). Since Jake/Jason arrived in Port Charles, Elizabeth Webber has been nursing him back to health and getting closer and closer to the mysterious new man – completely unaware that he was her former flame Jason Morgan.

Since Jake’s arrival in Port Charles back in October 2014, “General Hospital” spoilers have been teasing the big Jason Morgan reveal – and Elizabeth Webber basically deprived fans of that. We were all counting down the days until Jason Morgan’s friends and family would learn that he was alive – and had been living right underneath their noses. GH fans couldn’t wait to see Jason Morgan reunited with his wife Sam, son Danny, and close friends Sonny Corinthos (Maurice Benard) and Carly (Laura Wright).

At the 2015 Nurses Ball Elizabeth’s on-again off-again boyfriend Ric Lansing (Rick Hearst) proposed to her on stage in front of everyone – however before Elizabeth could react Carly stormed the stage and revealed that Ric had hired a con-artist to pose as Jake and had faked his marriage to Hayden in order to keep Jake and Liz apart. Meanwhile, Nikolas Cassadine (Tyler Christopher) took Liz aside and shared with her the secret he had been harboring for months – her friend Jake Doe was actually her ex Jason Morgan. GH fans waited in anticipation for Liz to announce that Jason Morgan was alive, but instead she opted to keep the secret to herself, and in the process became fan’s most-hated character on the ABC soap. In reality, Liz is not much better than Ric Lansing, and it is almost laughable that she lashed out at him for lying about Jake’s wife – when she is actually keeping a much bigger secret about Jake.

If Elizabeth truly cared about Jason Morgan – why wouldn’t she tell him, and his friends and family that he was alive? She selfishly opted to keep Jake Doe’s secret to herself for her own personal gain – and realized for the first time ever that she could technically be with Jason Morgan without anyone, especially his wife Sam, coming between them if no one knew who he truly was. In Elizabeth’s own twisted world she rationalized that Sam was happy with Patrick Drake (Jason Thompson) and Danny had a new dad in his life – and she didn’t want to upset their happily blended family. When in actuality it should have been up to Sam to decide if she wanted to remain with Patrick or reunite with her husband Jason Morgan.

Just when we thought that GH fans couldn’t hate the character Elizabeth Webber anymore – she seduced Jake on May 7, and the couple made love for the first time. Isn’t it ironic that Elizabeth suddenly couldn’t control her urges once she knew that Jake was Jason Morgan? It’s almost as if she is trying desperately to make Jason Morgan fall in love with her before the truth comes out, so when he learns that Sam is his wife there will be an even less-likely chance of a “JaSam” reunion because he will be involved with Elizabeth.

“General Hospital” spoilers and rumors reveal that it is only a matter of time before Jake Doe learns his true identity – and on May 22 Elizabeth will slip up and tell him the truth, or accidentally calls him Jason instead of Jake. By the end of May 2015, Jake Doe will know that he is Jason Morgan, and then what? Now that he has been sleeping with Liz, will he still want to reunite with his wife Sam and be a part of his son Danny’s life? Or now that he has sex with Liz – could he wind up getting her pregnant, which will only further complicate a potential “JaSam” reunion?

“General Hospital” rumors have been floating around for weeks now that Rebecca Herbst is quitting the ABC soap and her character Elizabeth is leaving Port Charles soon. The GH writers have a history of making fans despise central characters in the days leading up to their departure so that there isn’t a ton of backlash when they finally do exit. At this rate – when Elizabeth Webber leaves Port Charles, fans will be happy to see her go. How will Elizabeth exit though? Spoilers tease that the nurse opts to leave town after Jason Morgan’s identity is revealed because everyone, including Jason, is furious with her for keeping the secret. There is also the chance that once the truth comes out, Jason and Sam get back together, and Elizabeth is do devastated she will leave Port Charles and start her life over new somewhere else. Casting rumors have also been teasing that the popular character Lucky (Jonathan Jackson), another one of Liz’s exes may be headed back to “General Hospital” for a brief stint – he may return to town to help Liz pick up the pieces after the big Jason Morgan reveal and then convince her to leave town with him.

So GH fans, are you one of the millions of viewers who despise Elizabeth Webber right now for keeping Jake’s true identity a secret and depriving us of a “JaSam” reunion? Do you think that when Jake learns the truth he will dump Liz and reunite with Sam? What will come of Patrick then? Do you think the writers are just turning Liz in to a villain to prepare GH fans for Rebecca Herbst’s exit? Will Liz leave town pregnant with Jason’s baby? Let us know what you think in the comments below and don’t forget to check CDL tomorrow for more “General Hospital” spoilers and news.