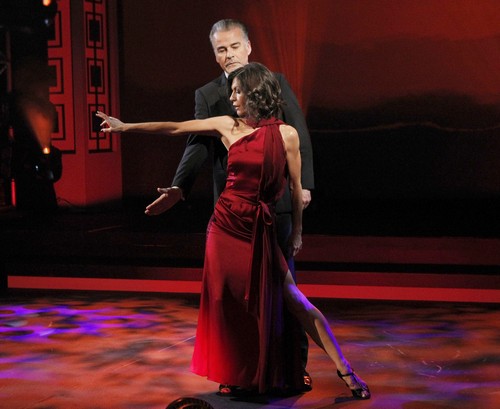 Here are some “General Hospital” spoilers for the Tuesday, May 5 episode – will the Jake is Jason story break loose today? Last we saw Liz Webber (Rebecca Herbst), she had a microphone in her hand and is ready to blab the Jason reveal.

On the last day of the Nurses Ball, there’s still some killer performances yet to see – including a show stopper by Eddie Maine aka Ned Ashton (Wally Kurth). This is a perfect swam song since Kurth’s final episode is soon to be on us. Olivia Falconeri (Lisa LoCicero) will be going into labor soon, the Julian Jerome (William deVry) baby-daddy lie is about to be revealed and Ned will head out of town to help Brook Lynn with something! No doubt, Ned will head back to Port Charles in the future, but for now, sayonara…

And now we know the results of the #GHFanFeb contest – the big winner was Courtney Matthews (Alicia Leigh Willis)! Fans chose Courtney for a return appearance and she comes back as a benevolent specter to give son Spencer Cassadine (Nicolas Bechtel) some advice now that he’s down in the dumps about his failed attempt to win Emma Drake (Brooklyn Rae Silzer) back by wreaking havoc at the Nurses Ball to disrupt her tango.

Meanwhile, it’s finally time for some blood at the ball! Done with his tango with Anna Devane (Finola Hughes), Duke Lavery (Ian Buchanan) confirms the hit on Jordan Ashton (Vinessa Antoine). Commish Sloane (Grayson McCouch) figures out who Duke’s target is and loops Jake Doe (Billy Miller) in on what’s coming. Shawn Butler (Sean Blakemore) also figures things out after a confrontation with Julian. Shawn realizes that Duke, not Julian, is behind the hit on his honey. Will he put Duke down?

What “General Hospital” spoilers indicate is that Jake will get the chance to play hero after he alerts Carly Corinthos (Laura Wright) that there’s trouble brewing. Liz really, really wants to tell Sam Morgan (Kelly Monaco) that Jason is alive, but she just won’t. Instead, Liz and Jake will enjoy some sizzling chemistry and she’ll gamble on keeping the secret so she can keep Jason to herself for now. Jake will save the day but will be wounded, making him a hero.

Liz will rush to nurse Jake after he’s hurt and his hero play will help rehab his rep around PC. Plus Sonny Corinthos (Maurice Benard) will owe Jake for the save. Sam has her own secret to deal with and she’s struggling to know whether to tell her dad Julian he’s about to be a dad again. Of course, she’ll blab, the question is when. Olivia is going into labor soon… Julian also has to answer to Alexis Davis (Nancy Lee Grahn) about his mob activities. Remember, he has a hit out on Duke.

Sonny should show up to meet Carly at the Nurses Ball concerned about what Duke is up to. This will put him and Carly at risk. Duke is in danger, but it’s his bodyguard Bruce we can expect to see zipped into a body bag ASAP. Duke himself will survive until week’s end – this is long enough for him to declare his undying love for Anna before, well, dying. So he’s dying but their love isn’t… Something like that. That’s okay – Sloane will be ready to offer Anna some comfort.

Lots of stuff happening in the last moments of the 2015 Nurses Ball! Don’t miss a second of today’s show then head back to CDL for more “General Hospital” spoilers, rumors and gossip.