General Hospital Spoilers: Mob Hits – Who Winds Up In a Body Bag – Music and Mayhem at Nurses Ball 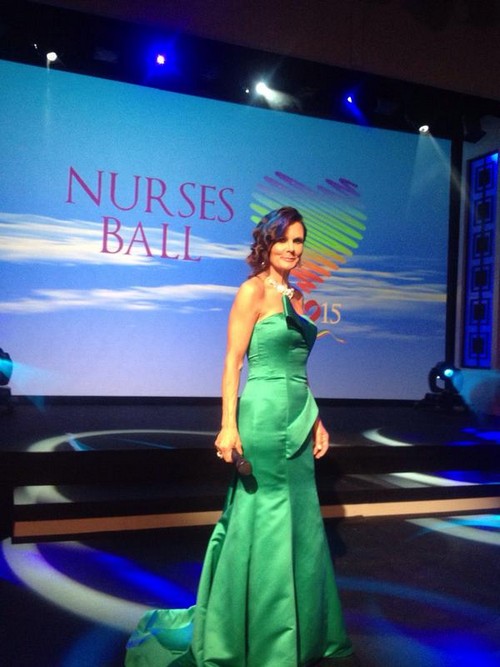 Monday is day two of the 2015 Nurses Ball extravaganza and is a must-watch GH show! Here are some “General Hospital” spoilers for the May 4 episode. “General Hospital” gossip indicates that Monday is when the mob violence breaks out and the Nurses Ball will turn from marriage proposals to murder plots! But first, some beefcake! The show will go on after the Ric Lansing (Rick Hearst) and Carly Corinthos (Laura Wright) debacle. Next on the Nurses Ball stage is a hot Magic Milo performance then a cute dance number featuring Lulu Spencer (Emme Rylan), Valerie Spencer (Brytni Sarpi) and some other lovely ladies.

The audience may be ready to move on from Carly’s antics, but Jake Doe (Billy Miller) is not. Jake will confront Carly about her on-stage antics with Ric and want to know why she embarrassed him like that. True enough, Carly did try several times to get Jake to listen to her about her Hayden Barnes (Rebecca Budig) investigation and he kept blowing her off. That won’t matter to Jake. After all, at least he felt a little tethered to reality with his fake wife, now all he has are strange flashbacks and no clue to who he is.

But that’s okay, someone else knows exactly who Jake is. On Friday’s show, Nikolas Cassadine (Tyler Christopher) spilled the Jason beans to Liz Webber (Rebecca Herbst) but now Nik has to get her to first, believe him and, second, not to tell anyone. So now Liz is saddled with Nik’s secret. The one thing that may get Liz to keep her silence is that she still loves Jason and that explains her attraction to Jake. If she keeps the secret, that means Liz can indulge herself with Jake, for now.

If Liz reconciles with Jake now and cements their relationship before he regains his memory, then she may be able to keep him to herself. On the other hand, Jake has a wife and child in Sam Morgan (Kelly Monaco) and Danny. On the other hand, Sam was pretty awful to Liz and let her son get kidnapped and sent goons to torment her. Maybe Liz will indulge in a little karmic payback and get busy with Jake. Besides, we all want it to happen, so I say – Go Liz Go! Go Liz Go!

And speaking of engagements – even though Ric’s proposal blew up in his face, the Nurses Ball still has a shot at some legit romance. Brad Cooper (Parry Shen) took over for Ric and finished singing Marry You and then decided to propose to Lucas Jones (Ryan Carnes) on the spot. Lucas wants to know if Brad’s proposal is for real and then will give a big fat “YES.” Woot woot. Port Charles will now have a fab gay wedding to look forward to. Can’t wait!

Meanwhile, on the main stage, Lucy Coe (Lynn Herring) has been rehearsing the tango with Duke Lavery (Ian Buchanan) but will engineer it instead so that he takes the stage with his lady love Anna Devane (Finola Hughes) instead. Hope they enjoy it since this will be their last dance – quite literally. Duke will be dead by Friday! And, no doubt, Anna will have some regrets about not telling him she still loved him. Ah well. I still want her to get busy with Commish Sloan (Grayson McCouch)!

And speaking of Sloane, that sexy silver fox, Jake will question Sloane about his theory on the planned mob hit. Jake will finally figure out who’s under the gun and will try to make a plan to save the people Julian Jerome (William deVry) has marked for death. Initially, Julian was gunning for Carlos Rivera (Jeffrey Vincent Parise) to take out Duke, but there are are also “General Hospital” rumors that Carly and Sonny Corinthos (Maurice Benard) will face an assassin’s bullet.

Anna will tell Sloane about her plan to deal with the mob violence and they’ll work together to figure out what’s going down. But will the two sexy law enforcement officers put all the pieces together too late? Yep! Jordan Ashford (Vinessa Antoine), Dante Falconeri (Dominic Zamprogna) and Duke all have bullets with their names on them chambered and ready to go. Look for intense violence to break out on two fronts to put a bloody ending to the 2015 Nurses Ball.

And, inspired by an unexpected visit from Britt Westbourne (Kelly Thiebaud), Spencer Cassadine (Nicolas Bechtel) will show up to the ball to fight for his lady love Emma Drake (Brooklyn Rae Silzer). Spencer has a plan to interrupt townie Cameron Spencer (Michael Leone) in his dance with Emma. Emma and Spencer will take a detour that puts them in danger. Sam will find them after Patrick Drake (Jason Thompson) notices they kids have gone missing.

But will Julian’s plans for Duke put Spencer and Emma in the cross hairs? And will Sam figure out what her dad is up to? Remember, Sam is sitting on the secret about Olivia Falconeri’s (Lisa LoCicero) baby being Julian’s, but if he’s engaged in mob shenanigans that put her per se step-daughter Emma in danger, will Sam see that her dad doesn’t deserve the truth? Will she hold onto the secret? Olivia is set to go into early labor at any time. Will Julian get to be in on the delivery?

What’s interesting is that Julian will be confronted by Shawn Butler (Sean Blakemore) and accused of a hit he didn’t order. Shawn assumes Julian is gunning for Jordan and will punch Julian in the kisser. Of course, Julian has no clue since he was trying to kill Duke, not Jordan. Alexis Davis (Nancy Lee Grahn) will be shocked and Shawn will realize he was misinformed about who was targeting his lady love – it’s Duke, not Julian and Jordan who is still in danger!

Someone will end up in a body bag by the end of the Nurses Ball. Will it be Bruce, Duke’s henchman, taken out when he tried to take out Jordan? Looks like the only good news to come out of the Nurses Ball is the Lucas/Brad engagement. Congratulations Bracas! If Britt can get off the most wanted list, I’d love to see her either be best man or give Brad away at their wedding. But for the rest of Port Charles, the 2015 Nurses Ball will certainly be memorable if nothing else.

Be sure to watch Mondays’ episode of General Hospital to see all of the exciting Nurses Ball action then come back to CDL for more “General Hospital” spoilers and gossip.