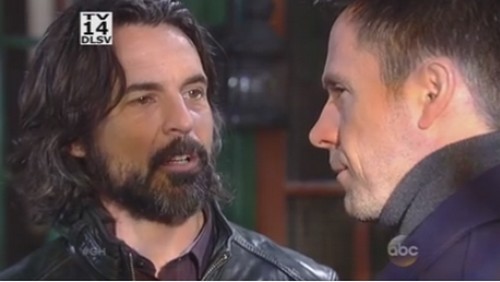 Here are some “General Hospital” spoilers for the Thursday May 7 episode! Even though the Nurses Ball has wrapped, that doesn’t mean things in Port Charles will quiet down. Danger is lurking and we can expect some violence on today’s show.

Nikolas Cassadine (Tyler Christopher) is upset to know that someone else knows about Jake’s true identity – Hayden Barnes (Rebecca Budig). Nik will try to deny what Hayden is sure of but she will press him – it’s pretty much blackmail. Not only does Hayden want money, she wants to shack up with the prince at the castle. Nik will have to cave (for now) but Hayden better be careful because it looks like Nik is finally embracing the dark side (i.e. turning into a real Cassadine) and that makes him very dangerous.

And, Julian Jerome (William deVry) happened along while Sam Morgan (Kelly Monaco) was telling Olivia Falconeri (Lisa LoCicero) that she can’t keep the baby secret from her dad. Fortunately, that conversation will be forestalled when Olivia goes into early labor. Both Julian and Ned Ashton (Wally Kurth) will be by her side as she’s taken to GH. But will someone spill the beans soon enough for Julian to experience the miracle of birth as a father? After all, he’s missed out on both of his other kids’ births.

Now that Anna Devane (Finola Hughes) and Duke Lavery (Ian Buchanan) made plans to run away together, they’re set for their happily ever after, right? Wrong! Commish Sloane (Grayson McCouch) will intercept Anna with news about the mob activity in Port Charles. And she won’t be the only one delayed for the midnight boat rendezvous. Duke tries to stop the hit on Jordan Ashford (Vinessa Antoine) but he’s too late! And then Carlos Rivera (Jeffrey Vincent Parise) sneaks up on Duke. Carlos has his black gloves on which means trouble.

Duke will be shot and will be dead by Friday’s episode. Looks like he won’t make that date with Anna and she’ll be devastated that they just pledged themselves and agreed to a fresh start only for him to meet a bloody demise. And Bruce is lurking nearby waiting for a shot at Jordan. Shawn Butler (Sean Blakemore) will hear Bruce and while Jordan may be injured, she’ll survive. Bruce will not. But will it be Shawn that puts him down. And once Shawn sees Bruce, he’ll know whose behind the hit.

In happier news, Liz Webber (Rebecca Herbst) wants Jake Doe (Billy Miller) to spend the night. Now that she’s put herself on the road of deceiving Jason about his past, she’s ready to make the most of this opportunity to be with the man she loves that’s been so long denied. Jake is ready to be with her after months of frustrated denial. Looks like sparks will fly in Liz’s house tonight… But how bad will it be when Ric Lansing (Rick Hearst) finds out they’re hooking up? Ric won’t take this lightly and will turn darker than ever.

Today’s General Hospital should be action-packed with romance and violence – don’t miss it! After the show, head back to CDL for lots more “General Hospital” spoilers and gossip!