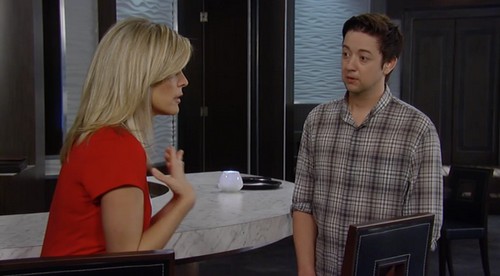 Here are some “General Hospital” spoilers for today’s big Friday episode – April 17. Sam Morgan (Kelly Monaco) isn’t yet all moved into Patrick Drake’s (Jason Thompson) place since her car went kaput. Jake Barnes (Billy Miller) will show up and offer to help Sam move and he’ll see the photo of Robin Scorpio (Kelly McCullough) and want to know who she is. Sam will explain it’s Patrick’s ex and Emma’s mom, but Jake won’t be able to deny there’s some sort of connection he’s feeling when he looks at Robin’s face. Will it trigger another flashback? Jake is soon to have another memory emerge of him holding a woman’s seemingly lifeless body – will it be Sam? Liz? Robin?

Olivia Falconeri (Lisa LoCicero) will demand to know why Ned Ashton (Wally Kurth) gave Franco (Roger Howarth) his shares of stock. This sets the scene for Ned to make a confession that he didn’t just sign on to be the baby daddy to be a nice guy but because he has genuine feelings for Olivia. She’s not feeling the reciprocal emotions – maybe because she’s just not into him, maybe because of some confusion because Julian Jerome (William deVry) is being so kind or maybe just because she’s as round as a beach ball, but she’s going to have to let Ned down easy after all he’s done for her.

Carly Corinthos (Laura Wright) is not satisfied with Hayden Barnes (Rebecca Budig) version of events and so she will hire Damien Spinelli (Bradford Anderson) to dig into Hayden’s past and figure out who this woman really is and what she wants from Jake. The question is, will Carly’s PI find the goods before the whole sham becomes self-evident? Ric Lansing’s (Rick Hearst) plot will fall apart by the Nurses Ball (if not sooner). Today, the guy Ric hired to pose in wedding photos with Hayden will show up at his door wanting more money and making threats. This guy will not go down quietly.

Meanwhile, Hayden isn’t resting on her laurels. She needs money because of some problems in her real life and isn’t certain Ric is going to come through. So Hayden is going to work on her new conquest – Nikolas Cassadine (Tyler Christopher) – to get some time between the sheets and maybe some of his money. Hayden will make it very clear to Nikolas that she’s into him and the chemistry between these two will be sizzling hot. He will have no problem bedding her again and has money to spare, so it’s a win-win.

Franco wants to know where Nina Clay (Michelle Stafford) went and she will be upset that he’s questioning her yet again. Nina will also be focused on what Liesl Obrecht (Kathleen Gati) said to her. Obrecht implied that Nina has dirt in her background that even she doesn’t know about. Is the evil doctor talking about the baby that Nina supposedly miscarried while in the coma from her mom drugging her? Is that baby alive and well? Is it Kiki Jerome (Hayley Erin)? Also, Nina thinks she hit on a sore spot about Nathan West (Ryan Paevey) perhaps not being the child of Liesl and Victor Cassadine. “General Hospital” rumors are floating around that Nathan may be the love child of Liesl and the evilest of all Cassadines – Valentin Cassadine – who has never been seen before.

And we saw yesterday that it looks like Silas Clay (Michael Easton) gave Ava Jerome (Maura West) a mercy death, but did he just put her into a coma to buy him some time to get baby Avery’s tests back to see if she’s a donor match? Maura West’s contract isn’t up yet, so unless there’s a ghost story line waiting for her (doubtful), Silas tricked her into thinking he was offing her. So does Silas have the baby? Or who? We still haven’t seen Avery since she was kidnapped, so it’s anyone’s guess right now. Who do you think has the little cutie?