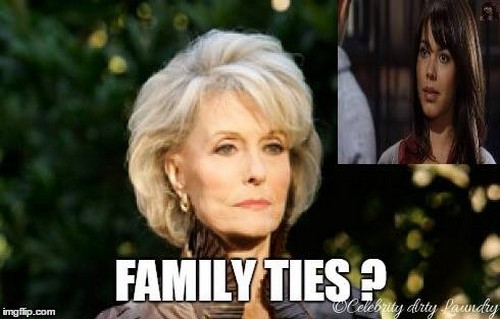 “General Hospital” spoilers explores the history and truth of Rosalie and what she is really up to. When Rosalie Martinez (Linda Elena Tovar) first came to Port Charles, she was pretending to be Nina Clay’s (Michelle Stafford) nurse but quickly became less caregiver and more trouble maker. Nina was housed at Crichton-Clark Clinic, the very same facility that Victor Cassadine (Thaao Penglis) was storing his family popsicle specimens and also Jason Morgan (Billy Miller). So was it a coincidence that Rosalie ended up in Port Charles and acting as Nina’s nurse? It’s not.

So who is Rosalie really and what are her ties to Port Charles and possibly the Cassadines? Spoilers and theories follow!

The ever-scheming Dr Liesl Obrecht (Kathleen Gati) played a pivotal role in Rosalie’s fate. Dr Obrecht and Helena Cassadine (Constance Towers) have a long and storied history. Dr O also has ties to Victor and possibly even bore a son with Valentin Cassadine, the never seen but supposedly most-treacherous of all the Cassadines.

When Obrecht was trying to convince her daughter Britta (Kelly Thiebaud) that she’s not the monster people think she is, she told her an interesting story that may have foreshadowed future GH storylines. Dr O told Britt that she was ordered to dispose of a baby 20 years ago – the permanent and deadly kind of disposal. But Obrecht said instead she found the child a home despite her orders otherwise.

She told Britta that it was Helena who wanted the baby 86’d and that, to this day, the evil Cassadine matriarch doesn’t know the child survived. Of course, Britt was stunned as her mom says even though Helena threatened her life, she saved the child, so how bad can she really be? As we all know, she’s pretty bad, but you have to give her props for not murdering a baby. Small succor indeed, but still…

Fast-forward to Crichton-Clark Clinic where Rosalie becomes Nina’s nurse. The timing is interesting – Rosalie was there at the same time as the Cassadines the Rosalie migrated to Port Charles and started up lots of shenanigans under the pretense of helping Nina exact revenge on those who hurt her including Nina’s mom Madeline Reeves (Donna Mills), her handsome hubby Dr Silas Clay (Michael Easton), Sam Morgan (Kelly Monaco) and even Ava Jerome (Maura West).

Despite Rosalie’s attraction to Morgan Corinthos (Bryan Craig), she finessed her way into Michael Quartermaine’s (Chad Duell) bed while he was bummed out over Kiki Jerome (Hayley Erin). And now on today’s “General Hospital” episode, Rosalie will be caught talking to someone on the phone about ELQ. Michael will overhear and demand to know who she’s talking to. The obvious answers is: a Cassadine. Before Helena was exiled by grandson Prince Nikolas Cassadine (Tyler Christopher) they were actively plotting to take over ELQ and Rosalie may be a tool in their plan.

Not only may Rosalie be working for the Cassadines, either because she’s being paid handsomely or blackmailed into participation (both are favorite tools of the Cassadine clan), but she has a definite tie to them. Remember after Helena threatened her, Rosalie faked a sprained ankle to keep Michael out of the basement of the Elm Street house which helped keep the gruesome tableau downstairs from being discovered.

But the real question is, does Rosalie have more of a connection to the Cassadines than either she or they know? In fact, could Rosalie be the baby that Dr Obrecht saved? If Rosalie is a Cassadine, who is her father? Is she the daughter of the ultimately-evil Valentin? Or is she a Victor or Stavros offspring? And how will Helena react once she finds out? Will Helena finish what she started 20 years ago and try to snuff out Rosalie? And will she punish Obrecht for not obeying orders?

Or will Nikolas find out there’s another stray Cassadine and move to save her from his terrible granny? And if she is a Cassadine, who is Rosalie’s mother? Was she a hapless maid that one of the Cassadine men took advantage of then paid off after delivery? Or killed off? You never know with the Cassadines, but the Rosalie storyline is one to watch. There are untapped depths there and ties to key Port Charles families that have yet to be revealed.