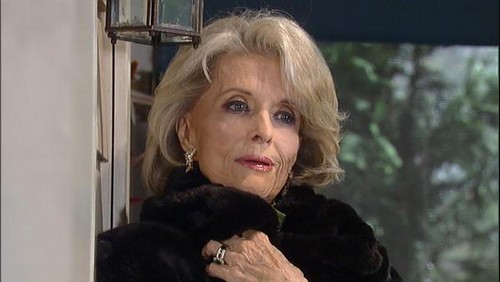 Monday January 12: “General Hospital” spoilers for the episode airing on January 12 reveal that Michael Quartermaine will run in to Fluke while he is checking out the home that Bill Eckert owns, and he will fill him in on his plans to turn it into a clinic. Meanwhile across town, Helena Cassadine taps in to her brainwashing super power and has another job for Jake AKA Jason Morgan. Rumor has it that she takes out a hit on Sam.

Tuesday January 13: According to “General Hospital” spoilers for January 13, the episode airing on Tuesday will revolve around the Port Charles mayoral election. Head writer Ron Carlivati revealed in Soap Opera Digest that by the end of Tuesday’s episode we will know who the next Port Charles mayor is. Spoilers also tease that Anna Devane’s job will once more be in jeopardy, and it will tie in to the mayoral storyline.

Wednesday January 14: On Wednesday’s episode of GH fans can expect to see Sam and Patrick continuing to bond, Nikolas teaming up with his sneaky Aunt Helena (or so she thinks), and also the mysterious Rosalie will be back on the canvas and finds herself on the receiving end of a job offer from Michael Quartermaine. Considering the fact that she is a nurse, he most likely offers her a job at the new clinic he is building.

Thursday January 15: Since Nina Clay’s nurse Rosalie arrived in Port Charles, spoilers have been teasing that she is up to something and could even be related to one of the “General Hospital” characters. On Thursday January 14 the secret about Rosalie that fans have been waiting impatiently for – will finally be revealed. Meanwhile, Johnny Zacchara continues to stir up trouble, and apparently was unfazed by Dante’s threat, because he makes Lulu an interesting offer.

Friday January 16: “General Hospital” spoilers for January 16 reveal that fans will not want to miss the exciting Friday episode. According to spoilers, Elizabeth catches Jake doing something suspicious, Patrick and Sam head out on another date, and Dante walks in on an unsuspecting Lulu and Johnny Zacchara.

So GH fans, do you think that Lulu will cheat on Dante with Johnny? Does Elizabeth catch Jake completing the task that Helena assigned him, is it killing his own wife Sam Morgan? What do you think Rosalie’s big secret is, who is she in cohoots with? Let us know what you think in the comments below and don’t forget to check CDL tomorrow for more “General Hospital” spoilers and news.