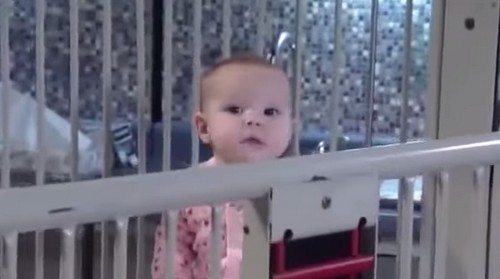 Ready for some culmination on those Friday cliffhangers? Check out these “General Hospital” spoilers for the Monday, April 13 episode of the hit ABC soap. Now that Maxie Jones (Kirsten Storms) has chosen Damien Spinelli (Bradford Anderson), of course it’s time for Nathan West (Ryan Paevey) to show up and tempt Maxie again. When he asks to get back together, Spinelli will step up and tell him it’s too late, that he and Maxie are going to be together – and not just to raise their daughter. Maxie will be tempted and Nathan will be stunned and hurt. This will prime him for a new lady to come into his life – perhaps Valerie Spencer (Brytni Sarpi)?

Speaking of Valerie, Dante Falconeri (Dominic Zamprogna) will reassure her that Lulu Spencer (Emme Rylan) won’t hold her attempt to kill Luke Spencer (Anthony Geary) against her. Dante may be overestimating his wife’s tolerance, though. Lulu will rant to her dad that Valerie wasn’t right about him deserving to die and that it’s not Valerie’s decision what happens to him. Lulu will be very upset and think that Valerie has made Luke lose his will to live. This will put Dante into a position of championing Valerie and they will grow closer as a result.

When Nina Clay (Michelle Stafford) comes back to the Metro Court suite, Franco (Roger Howarth) wants to know where she went. Her answers aren’t as clear as Franco wants and they will have a disagreement. Franco is worried that Nina is slipping back into her crazy mode but he’ll apologize. Nina will be hurt that he doesn’t trust her. Looks like both Franco and Nina have plans in their head to make mischief, but neither is fully aware of what the other is plotting.

Ned Ashton (Wally Kurth) will pay Franco off, as requested, with his share of ELQ stock which totals 11%. Ned thinks he’ll be able to get the shares back later and sees this as a temporary bargaining chip to get Franco off Olivia Falconeri’s (Lisa LoCicero) back. How great would it be to see Franco strut into an ELQ board meeting and sit down watching the stunned expression on Michael Quartermaine (Chad Duell) and Tracy Quartermaine’s (Jane Eliot) faces. If they want to hold off Nikolas Cassadine’s (Tyler Christopher) raid on ELQ, they’ll have to make nice with the lunatic.

Speaking of Michael, Sabrina Santiago (Teresa Castillo) will be suspicious of the allergy meds that she thinks may have pushed Michael over the edge. She will turn to Felix DuBois (Marc Samuel) to try and figure out what Michael has been taking. They’ll figure out he was drugged, but then have to figure out who the culprit is. They’ll consider who has access to medications – Kiki Jerome’s (Hayley Erin) will stand out since Silas Clay (Michael Easton) helped her get a job at GH.

And now on to Silas – he came to Port Charles to steal some drugs to end Ava Jerome’s (Maura West) life, but then when he’s asked to examine baby Avery, he has a thought and runs blood tests on the baby. Silas is looking to see if the baby is a match to serve as a donor to save Ava’s life. And sure enough, Avery will be kidnapped from the hospital. Problem is, there are many likely suspects, all with different motivations to take the child of Sonny Corinthos (Maurice Benard) and Ava.

Michael – He is gone from the Q mansion when Sabrina goes looking for him even though Alexis Davis (Nancy Lee Grahn) told him to stay put. Did he head to the hospital to snatch baby Avery? He is desperate to protect her and feels like Morgan Corinthos (Bryan Craig) is pulling strings to ultimately get Avery back in Sonny’s hands.

Nina – After Kiki physically attacked Nina at GH, she’s no feeling warm and fuzzy toward Silas’ daughter. Nina also still thinks that Ava owes her a baby and since she thinks Ava is dead, this may be her last chance to cash that chip. When Morgan and Kiki have their backs turned, did she sneak into the room to snatch the baby? Nina wants a baby to replace the one she lost in a coma and we know her mental status is fragile.

Silas – The doctor is usually pretty above-board, but he wants to save Ava not only for Ava’s sake, but also for Kiki and Avery’s sake. After finding out the blood tests are a match for Avery to be a donor, did Silas walk out with baby Avery so he can take some bone marrow to save Ava, planning on returning her to Kiki once Ava recovers?

And now some on the Jake Doe (Billy Miller) story line. Carly Corinthos (Laura Wright) is determined to prove Hayden Barnes (Rebecca Budig) is a fraud. Carly will get a glimpse of the guy from the wedding photos (supposedly Jake before his plastic surgery) and this will confirm her suspicions. Also, Nikolas will check his safe at Wyndemere and discover that Jason’s wedding ring is gone and he will panic. Spencer Cassadine (Nicolas Bechtel), in the grand tradition of his evil family, will look to leverage knowledge of Alan Quartermaine’s wedding ring to get Nik to press charges against Cameron. Will Nik go to those lengths to cover his own butt so everyone he cares about won’t find out he’s known about Jason all along?