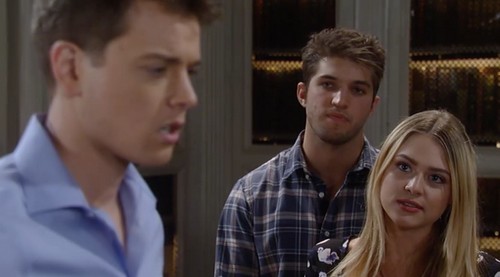 Ready for a “General Hospital” cliffhanger show? Check out these “General Hospital” spoilers for the Friday April 10 show. Today, while Silas Clay (Michael Easton) is on a drug run to GH to pick up medication to kill off Ava Jerome (Maura West) – yes is time for euthanasia, he’ll run into Nina Clay (Michelle Stafford) who came looking for him. And while Nina is out looking for her ex, Franco (Roger Howarth) will have a showdown with Ned Ashton (Wally Kurth). Ned will try and shut down the blackmail but how will he be able to leverage Franco? All the charges against Franco have been dropped. Unless Ned takes over paying the blackmail money, it seems unlikely. But, then again, Franco may overplay his hand and it could all blow up.

And the Maxie Jones (Kirsten Storms) love triangle will heat up. Baby daddy Damien Spinelli (Bradford Anderson) is tired of waiting on Maxie to give him an answer about them being a family again and will press her. And Maxie will seriously consider it, especially since Nathan West (Ryan Paevey) has bowed out.

But then Lucas Jones (Ryan Carnes) will tell Nathan he shouldn’t give up on Maxie so easily and Nathan will take another run at Maxie after warning Spinelli he’s not letting go. This will have Maxie thinking she should go with the hunky cop, but “General Hospital” rumors indicate that Valerie Spencer (Brytni Sarpi) may further complicate this love wrangle.

Michael Quartermaine (Chad Duell) will ask the Child Protective Service lady if they can slow up on taking baby AJ from him. But Kiki Jerome (Haley Erin) and Morgan Corinthos (Bryan Craig) will be there to antagonize the situation. “General Hospital” gossip reveals that Michael will lose custody of his sister, but this will raise questions of where to place her.

Sonny Corinthos (Maurice Benard) is still unfit so that leaves her big sister Kiki and Uncle Julian Jerome (William deVry). Once Michael loses custody, he will turn his attention to ELQ and trying to keep the company from slipping out of the Quartermaine’s control. Luke Spencer (Anthony Geary) will be committed to Shadybrooke rather than being sent to Pentonville.

This will free Tracy Quartermaine (Jane Eliot) up to also focus on the ELQ raid by Nikolas Cassadine (Tyler Christopher). But remember, Nik has Jason Morgan/Jake Doe’s (Billy Miller) shares sidelined by his amnesia while Nik is bedding Jake’s fake wife Hayden Barnes (Rebecca Budig). It won’t be long before Hayden’s story falls apart, though, thanks to Carly Corinthos’ (Laura Wright) digging into her background. Once she doesn’t have that scam going, Nik will take her in at Wyndemere.

Dante Falconeri (Dominic Zamprogna) has serious investigative work ahead of him. He’ll try to help Lulu Falconeri (Emme Rylan) deal with some of the dirt associated with the turbulent Spencer family history. And there’s still some unrealized “General Hospital” gossip that indicates Dante and Lulu will go back to the old Spencer home and find something in a hidden crawl space.

Baby Avery will also become important to several storylines. Silas will find out only Ava’s little girl can save her from the ravages of cancer but he’ll have to get Sonny’s permission to take a stem cell sample. But he may not want to grant it, plus Sonny may not even have custody of his daughter anytime soon. There are also some wild rumors that Sonny may yet turn out to not be Avery’s daddy.

If Morgan is, in fact, the dad and there was a mix up in the DNA testing, Morgan would likely agree to baby Avery donating bone marrow to save her mom. Plus there’s the added bonus that Morgan will be excited to know that Ava is alive and won’t rat her out. And speaking of babies, Olivia Falconeri’s (Lisa LoCicero) baby lie is getting harder to keep up with. Julian will come to see Olivia today to make her an offer she may not be able to refuse. Plus, Ned is soon to be headed out of Port Charles for good when Wally Kurth exits the show, so Olivia will be on her own very soon. Don’t miss “General Hospital” then come back to CDL for “General Hospital” spoilers and gossip.