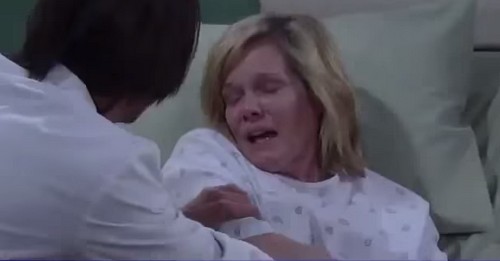 Can’t wait for Thursday’s episode of GH? Here are some “General Hospital” spoilers to get you ready for today’s April 9, 2015 episode! After Michael Quartermaine’s (Chad Duell) epic tantrum at the Metro Court that climaxed with him dumping his baby sister Avery out of her stroller, Carly Corinthos (Laura Wright) and Sonny Corinthos (Maurice Benard) will worry about Michael. When the whole ugly thing comes out on Access Port Charles, Sonny will rant to Morgan Corinthos (Bryan Craig) wondering why someone would take advantage like this. Of course, it’s Morgan that’s taking advantage. He won’t understand why dad Sonny is siding with Michael instead of moving in to crush him.

Wracked with cancer, Ava Jerome (Maura West) will push Silas Clay (Michael Easton) to end her life. Silas will seriously consider euthanizing Ava so she can have some peace and end the pain, but then he’ll come across some information that will lead to hope for her. First, “General Hospital” spoilers indicate that Silas will reveal to Delia Ryan (Ilene Kristen) that Ava is dying since she’s the only other person that knows Ava is alive. It looks like it will be baby Avery, though, that saves Ava’s life and rumor has it that Morgan is involved. Is he Ava’s real baby daddy? That would let him give permission for the baby to donate to save her mother.

Ned Ashton (Wally Kurth) will discover that Olivia Falconeri (Lisa LoCicero) is being blackmailed by Franco (Roger Howarth) and Nina Clay (Michelle Stafford). He’ll wonder how Franco could possibly know that Julian Jerome (William deVry) is the real daddy and not him. Olivia will have to admit she blabbed it. How will this GH storyline wrap up before Wally Kurth leaves the show in the next couple of weeks? For now, Nina and Franco will live high on the hog at the Metro Court even though their triumph won’t last.

While Jake Doe (Billy Miller) continues to have more flashbacks of his life with Sam Morgan (Kelly Monaco), Shawn Butler (Sean Blakemore) will make it clear to Sonny that Jake is going to be a problem in their mob war with Julian. Jake will dig in and try to figure out who Julian and Carlos Rivera (Jeffrey Vincent Parise) are planning to kill off in the Corinthos organization. Commissioner Sloane (Grayson McCouch) will continue to press him to get the goods. Sloane wants to beat Anna to the punch on taking down the Port Charles mob families so he can make her look inept.

Meanwhile, Sabrina Santiago (Teresa Castillo) will suspect that all is not right with Michael medically since she knows he only had a couple of drinks at the Metro Court bar – not enough to spawn the seemingly drunken rant she (and all of Port Charles, thanks to Access PC, witnessed). Since Michael left his bottle of allergy meds lying around, Sabrina will take the pills to Felix DuBois (Marc Samuel) to see what he was prescribed. She’ll find out his pills were switched – but how long will it take to figure out it was Morgan that set him up?