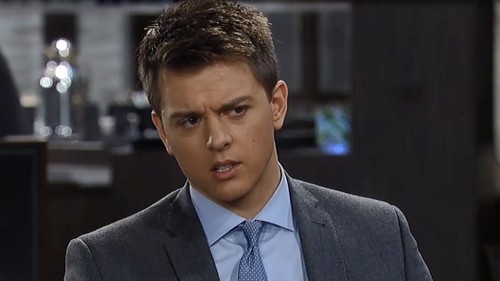 Here are some juicy “General Hospital” spoilers for the Monday, April 6 episode. We’re hoping to see some GH resolution on Monday’s big show! On Friday, Liz Webber (Rebecca Herbst) mentioned to Nikolas Cassadine (Tyler Christopher) that Jake Doe’s (Billy Miller) wife has showed up. When Nikolas reacts strangely and strongly to this news on Monday’s show, Liz will ask why he’s so interested in Hayden Barnes (Rebecca Budig). Naturally Nik knows that Hayden cannot be Jake’s wife so he goes to confront her.

Meanwhile Ric Lansing (Rick Hearst) shares a celebratory glass of champagne with Hayden who tells him Liz should be ready to fall into his arms after she told Liz all about she and Jake’s hot make-up amnesiac sex. Ric doesn’t want to hear about Hayden getting busy with Jake but Hayden is quick to explain they didn’t shag and she’s very frustrated in the bedroom department.

Hayden tries to get Ric into bed with her since she’s feeling amorous but Ric will not risk it because he’s holding out for Liz. So when Nik shows up to confront Hayden, she’s climbing the walls. But the confrontation won’t go exactly as Nik had planned. Will Hayden try and tell him she’s just running a scam or will she sell out Ric? One thing we hear is that Nikolas and Hayden wind up having hot sex and Nik will make it clear that he’s not going to out her. 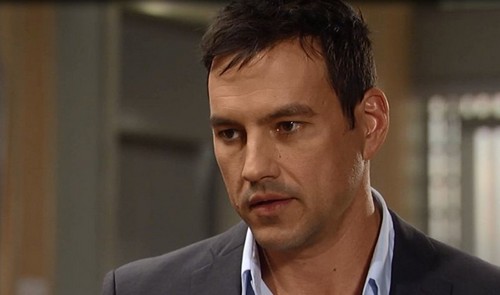 “General Hospital” spoilers indicate that now that Nik and Hayden have dirt on each other which guarantees mutually assured destruction, Nik will take care of Hayden’s amorous needs by bedding her. She’ll be very pleased. With Hayden still around, Nik can focus on taking over ELQ without Jason’s stock coming into play. But once this comes out, Sam, Liz and Carly will all hate Nik!

Meanwhile Spencer Cassadine (Nicolas Bechtel) got into the safe and found Jason’s ring. He may not recognize it, but he certainly noticed Alan Quartermaine’s name on it and knows it shouldn’t be in his dad’s safe. Spencer will get a visit from Emma Drake (Brooklyn Rae Silzer) and he’ll try to get her to commit to him once and for all. Emma will not be ready to take this big step with him.

A frustrated Spencer will lash out at his dad, blaming Cameron Webber (Michael Leone) for all his problems. Nik promised Liz he would tell Cameron he has nothing to worry about related to the fire, but he may not be able to keep his word. Spencer will tell his father he’s going to tell about the ring unless dad presses charges against Cameron. Nik is going to end up on everyone’s poop list.

When Jake saw the motorcycle, he had another vision of Sam Morgan (Kelly Monaco) and he was riding the motorcycle with her. When Sam shows up at the shop to get her car checked out, Jake will tell her he had a vivid dream. Then he’ll give her a lift home on Jason’s motorcycle. Will this trigger memories for them both? Patrick Drake (Jason Thompson) will not be happy to see them together.

Also, Morgan Corinthos (Bryan Craig) and Kiki Jerome (Hayley Erin) are ready to deliver the 1-2 punch to Michael Quartermaine (Chad Duell) to make him look like a drunk/druggie so they can get custody of baby Avery from him. Their diabolical plan will take root this week and Michael will see his life starting to unravel.

Also, to wet your whistle for next month – the May 15 and 18 episodes of GH will be live broadcasts and fans are encouraged to live tweet at #GHLive.