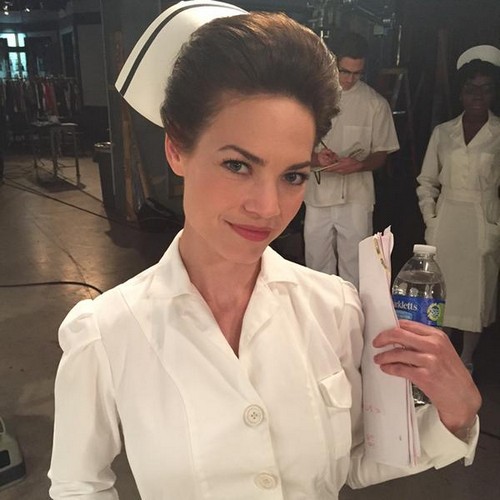 Last week during a twitter chat for #AskGH, GH exec producer Frank Valentini dropped a “General Hospital” spoilers bombshell about Liz Webber (Rebecca Herbst). He tweeted: “Liz’s family will grow this summer.” So what does that mean? Let’s consider the facts. When you hear that a breeding age woman’s family is growing, you assume pregnancy. But Liz’s love life has been a bit lackluster of late.

Liz and Ric Lansing (Rick Hearst) did hook up for New Years, but that’s been ages ago. And while she and Jake Doe (Billy Miller) were on the verge of getting busy, there were interrupted by Jake’s fake wife Hayden Barnes (Rebecca Budig). Unless it’s an immaculate conception (and we know Liz is no angel), it seems safe to assume that a baby is not the new family. So what did Valentini mean?

While Liz has no other family in Port Charles, she does elsewhere. First, she has sister Sarah who is herself a doctor that we haven’t seen since she and Liz were in high school. Sarah took off from Port Charles to be with their parents in Sierra Leone and hasn’t been seen since. If GH show runners are looking to add some new love interests for the 20-30 year old set in Port Charles, Sarah would be a great choice and they can recast with who they want since the original Sarah is a distant memory.

However, if they’re looking to create trouble and intrigue, perhaps GH may be finally ready to reveal Liz’s never before seen mum. We saw her dad Jeff Webber briefly in the 90s (played by MacGyver and Stargate phenom Richard Dean Anderson) but her mom was never shown and as far as I can recall, we’ve never even heard her name.

They could literally cast anyone in the part of mystery mom and make her related to anyone else in Port Charles they want. That would add another 40-50 year old lady into the PC dating pool. But that doesn’t really seem that interesting. What does seem much more intriguing is this – what about Liz’s half-brother Steve Webber (Scott Reeves)?

Steve offers a lot more to the show in terms of story line potential. Remember last we saw Steve, he was on the verge of getting hitched to Olivia Falconeri (Lisa LoCicero) but their I do’s were interrupted by his arrest and extradition to Memphis to answer for selling organs. It’s plausible that Steve could have served his time or charges got dropped or any number of other explanations.

And here’s what would be great about bringing Steve back. First, since he and Franco (Roger Howarth) share a mom in nut case Heather Webber (Robin Mattson), they would be insta-brothers and think how much trouble those two could get up to. And you know Franco would be thrilled to find out he has a big brother. Steve may be excited as well since he also grew up in adoptive family.

Plus – Olivia is preggers and trying to deny Julian Jerome’s (William deVry) paternity by saying Ned Ashton (Wally Kurth) is her baby daddy. But we know Kurth is leaving GH to resume the role of Justin Kiriakis on Days of Our Lives. This will leave a hole in her life that Steve could step right into and play baby daddy and they could resume their big love affair, get married, yada yada.

And here’s another clue as to why Steve Webber may be the likely expansion to Liz’s family. At a recent fan event, the Soap Fantasy Reunion, Scott Reeves was asked about playing Steve on GH. He told fans: “I had such a great time at ‘General Hospital.’ They welcomed me in with open arms, like a family right from the get go. If the timing was right and it presented itself, I would definitely consider heading back.” Fingers crossed, he’ll get that chance.

We’ll keep you posted with more spoilers about Liz’s expanding family so be sure to come back to CDL often for tons more “General Hospital” gossip, spoilers and casting news.