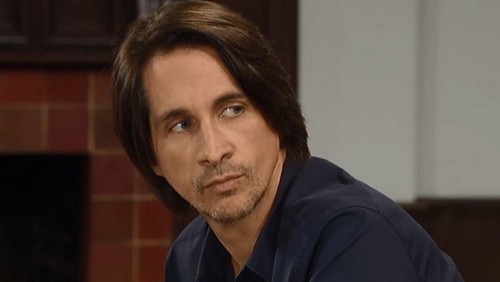 “General Hospital” spoilers for the ABC soap for Tuesday, February 24. This week we’ll see that Ned Ashton (Wally Kurth) is fully committed to his pretend role as baby daddy to Olivia Falconeri’s (Lisa LoCicero) baby. They’ll sit down at Ruby’s, share a dessert and Ned will tell her he’s all in and Olivia will take him up on the kind offer of pretend patriarchy. However, Alexis Davis (Nancy Lee Grahn) isn’t having it. Alexis will refuse to accept that Ned so callously cheated on her and will encourage Julian Jerome (William deVry) in the hopes that Olivia’s baby might be his.

What’s ironic here is that Alexis tried so hard to keep her daughter Kristina Davis (Lindsey Morgan) away from baby daddy Sonny Corinthos (Maurice Benard) for the same reason Olivia wants to keep her child from Julian. Hypocrite much, Alexis?

Over at Wyndemere there’s more on fire than just Spencer Cassadine’s (Nicholas Bechtel) smoking hot birthday party. Cameron Webber (Michael Leone) knocked a gift bag into a candle on accident after he dumped Emma Drake (Brooklyn Rae Silzer) and took off with Josslyn Jacks (Hannah Nordberg). The fire will build into an inferno while new young couple Spencer and Emma dance blissfully around. And since Wyndemere is an old tinderbox, we know it’s going to go up in flames.

Patrick Drake (Jason Thompson) and Nikolas Cassadine (Christopher Tyler) will race to Wyndemere to try and save the kids, but will they be a little too late. Emma will be fine and Spencer will survive but not quite unscathed. And speaking of Prince Nik, he’s already feeling hella guilty about not telling anyone that Jake Doe (Billy Miller) is, in fact, Jason Morgan.

He planned to swallow that guilt and soldier on because it’s the best think for his corporate takeover plans involving ELQ. But now that Spencer had a really close call in that fire, Nikolas may see it as a sign that he has to come clean – especially if he sees Jake Doe at GH while he’s getting Spencer checked out for fire-related injuries.

Now on to someone we haven’t seen in a while – Dr Silas Clay (Michael Easton). Rumor has it the good doctor has a big secret and a new mystery patient outside of “General Hospital.” That’s right – it’s Ava Jerome (Maura West)! We all knew she wasn’t dead – even if a body does turn up in Port Charles, you can count on a vampire resurrection, evil twin or radical cosmetic surgery to revitalize a dead character.

But in Ava’s case, no body = no death. And speaking of Ava, the all-new Kiki Jerome (Hayley Erin) is rumored to be seen for the first time this week as she plans a memorial service for her dead (really not so dead) mom Ava. This will also be Kiki’s chance to find out that Michael Quartermaine (Chad Duell) is trying to get custody of her sister. The big question is, will Kiki throw in with Michael Q, with Sonny or try to keep little cutie Avery all to herself?

Finally, look for Nathan West (the scrumptious Ryan Paevey) to consider abandoning his leg of the Maxie Jones (Kirsten Storms) and Damien Spinelli (Bradford Parsons) love triangle that has cropped up. Let’s call it Wes-Max-Inelli. Because Nathan is a good guy, he will consider bowing out to let their family be whole and so little Georgie Spinelli (Harper Rose Barash) can have her mommy and daddy. Aww…

In the Facebook group Soap Opera Spy people are talking about these hot GH issues! Check back with CDL tomorrow and every day for more “General Hospital” spoilers, rumors and casting news about what’s going on in Port Charles!