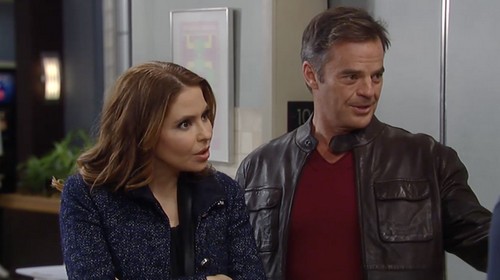 Here’s a look at some “General Hospital” spoilers for the ABC soap for Thursday, February 19. First let’s talk babies. As predicted, Olivia Falconeri (Lisa LoCicero) tried to call takebacks on telling Ned Ashton (Wally Kurth) that she was pregnant. She tries to say she did a faulty home pregnancy test but Ned reminds Olivia that she said it was a blood test at GH. She caves, says she’s preggers and that she knows it’s Julian Jerome’s (William deVry).

Olivia tells Ned she’s going to have to flee town to keep the child safe. Ned insists on taking Olivia to the hospital to get a pre-natal check. Of course, they run right into Alexis Davis (Nancy Lee Grahn) and Julian. Ned immediately pulls Olivia into a protective hug. This week, Ned will claim to everyone that he and Olivia are having a baby. This will take Olivia off guard but, of course, she’ll play along because a Q baby is better than a mob baby any day. Aww, what a white knight!

In other baby news, Michael Quartermaine (Chad Duell) will crow to Sabrina Santiago (Teresa Castillo) that he’s scored his first victory over his quasi-dad Sonny Corinthos (Maurice Benard) by making a move to take away baby Avery. But Sonny may be cleaning up his act to fight back. When Duke Lavery (Ian Buchanan) comes to hand the reins of the mob business back to Sonny, will Sonny leave the syndicate in Duke’s capable hands so he can claim he’s out of the mob when he goes to court for the custody battle?

And, speaking of Michael hating Sonny, what are the odds that Sonny really didn’t kill Michael’s bio-dad AJ Quartermaine? Of course Sonny did shoot AJ, but those were extenuating circumstances plus AJ survived the shooting only to die almost a month later in the hospital. But, if you watched closely on Wednesday, remember how Bobbie Spencer (Jacklyn Zeman) railed at Luke Spencer (Anthony Geary) for trying to kill her son Lucas Jones (Ryan Carnes)?

Bobbie reminded Luke that he sat at Lucas’ hospital bedside hoping for his recovery. But Luke told her he was there just waiting for a chance to finish Lucas off but was stopped by Julian. Now, hold that thought of Luke finishing off someone in the hospital and stay with me. Luke told Bobbie that his whole focus over the last many months has been to destroy Sonny.

What if Luke was the one that killed off AJ  (in his Fluke persona of course) while he was in the hospital knowing that the truth would eventually come out and Sonny would go to jail for the death? Also, Ava Jerome (Maura West), Carlos Rivera (Jeffrey Vincent Parise) and Julian all had incentives to silence AJ – more so than Sonny. And since Luke and Julian have a past together, that complicates things more. This plot line likely won’t unravel soon, but it definitely one to watch.

Helena Cassadine (Constance Towers) revealed to Lulu Spencer (Emme Rylan) and Tracy Quartermaine (Jane Elliot) that Luke has two distinct personalities and that whatever caused his DID (dissociative identity disorder) happened in his childhood home. What do you think caused the personality split? Bill Eckert (Anthony Geary) was Luke’s cousin and supposedly died protecting Lucky Spencer (Jonathon Jackson) from Frank Smith’s goons. Did Luke’s childhood trauma involve Bill? Was he molested? Were they both?

According to the interwebs, the most common cause of DID is “early, ongoing, extreme physical and/or sexual abuse” so what do you think happened to Luke? He seems to be focused on the basement. Was he molested there and, if so, did he dig up Bill and bring him back there to ask why he didn’t protect Luke somehow? It’s a conundrum, but Tracy Q will soon put Damien Spinelli (Bradford Parsons) on the case to go back to the old Spencer homestead and find some answers. If anyone can get to the bottom of this, it’s our favorite private eye/hacker.

On to other mysteries. Patrick Drake (Jason Thompson) told Sam Morgan (Kelly Monaco) about Jake Doe’s (Billy Miller) poor brain surgery prognosis and she reminded him that he told Jason the same thing and his surgery worked out. Patrick tells her that Jake and Jason are completely different people. But once Patrick cracks Jake’s cranium, he should realize that brain looks familiar and he’s seen this scar tissue before. Since Jake gave permission for the surgery, it seems like just a matter of time.

Nikolas Cassadine (Christopher Tyler) demands more answers about Jake from Helena. She gives him a box that has Alan Quartermaine’s ring in it that Monica Quartermaine gave to Sam and she in turn gave to Jason when they got married. So now Nikolas knows who Jake is and he will want to tell Sam but Helena is going to talk him into delaying by hook or by crook.

As Jake goes under, he will remember talking to Helena about having a new face and being a privileged son and becoming an assassin. Jake remembers her saying that he’s Jason Morgan. But then the anesthesia takes over and he’s gone. Jake won’t remember this or the ring flashback when he wakes up and will be lost again before everything is sorted out and he recovers his Jason memories. Does a character get a bonus for being a double amnesiac?