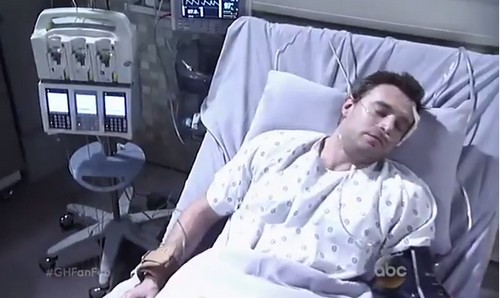 Check out these “General Hospital” spoilers for the ABC soap for Wednesday, February 18. First, Helena Cassadine (Constance Towers) may be out of jail, but that doesn’t mean she’s out of hot water. Tuesday’s show started with an “out of the mouths of babes” moments when Spencer Cassadine (Nicholas Bechtel) stops waltzing with his grandma mid-lesson and asks if she’s going to hurt him if he messes up like she did with Luke Spencer (Anthony Geary) and his Aunt Lulu (Emme Rylan).

Always thinking on her feet, but ready to dance around the truth and her great-grandson, Helena tells Spencer that she had good reasons for what she did and Spencer asks what if he gave her a reason to hurt him but she says he’s her little prince. Wow. Helena may have side-stepped Spencer, but Nikolas is not about to let her off the hook. He confronts her about what she’s done with Luke and Jake Doe (Billy Miller) and just as he’s about to get some answers, Lulu bursts in.

That’s okay, today we’ll get some real answers and Helena will tell Nikolas that Jake is really Jason Morgan but he won’t share that knowledge with anyone else. And speaking of mind control, Luke and Jake each got an MRI and Patrick Drake (Jason Thompson) broke the news to Lulu, Tracy Quartermaine (Jane Elliott) and Elizabeth Webber (Rebecca Herbst) that while Jake does have a microchip in his brain, Luke does not. He’s just apparently evil – no mind control. There is still no decent resolution of the Fluke mystery in sight.

Patrick also says Jake has had prior brain surgeries and the scar tissue in his noggin to prove it. Just as a matter of point, GH seems to have no respect for patient privacy. I mean, hello! Maybe tell Tracy and Lulu about Luke since they’re his family, but where does Patrick get off telling the room that Jake has a messed up brain for many reasons. Not cool, Drake. Tomorrow, Patrick will explain to Jake that he can’t go digging around in his brain and that the risks are just too great.

We can, of course, expect Jake to tell him to cut his head open anyway, risks be damned. He’ll want that chip out and his memories back. What’s ironic is that Jake tells Luke he doesn’t like all the terrible things he was made to do, but once he gets his memories back, he’s going to find out he’s killed a lot more people before he was ever a mind control victim and all of his own free will. Ironic, right? As Jake heads into surgery, he’s going to get a memory flashback but won’t tell anyone.

Over at the mob mansion, Sonny Corinthos (Maurice Benard) told little Avery that no one is going to take her from him. But Michael Quartermaine (Chad Duell) sure plans to try. Carly Corinthos (Laura Wright) tries to talk sense to her son but he brings up some pretty good points about how kids and loved ones around Sonny tend to get kidnapped, shot, blown up, etc. Michael vows to do with Avery the opposite of what Sonny did to him.

Michael says he’ll take Avery away from being a Corinthos and make her a Quartermaine. Expect to see Carly try and reason further with Michael and him to ignore her. Morgan Corinthos (Bryan Craig) is also taking his parents’ side in the custody battle and will soon confront his brother (also to no avail) to shut down the lawsuit. And as sexy as Sonny looks cuddling that cute baby, Michael makes some good points about the child’s safety.

Sonny plans to bring Diane Miller (Carolyn Hennesy) in to represent him (if, that is, Michael isn’t using her). Likely, he’s got Alexis Davis (Nancy Lee Grahn) to represent him. Who’s excited to see a big Alexis vs Diane power-lawyer showdown? (Goosebumps!)

Bobbi Spencer (Jaclyn Zeman) will come yell at her brother Luke, but he will be unrepentant as per usual. Geary’s contract is up in April and he had recent back surgery that’s giving him fits and requires many hours of physical therapy each day. This story line has allowed Geary to appear here, there and, now that Luke is in jail, lying down a lot, but he may want a break from the show. Luke seems to be burning bridges left and right and this may set the stage for an exit for at least a while.

And now that Olivia Falconeri (Lisa LoCicero) has told Ned Ashton (Wally Kurth) that she’s knocked up, it’s all out in the open, right? Wrong! Olivia will now furiously backpedal and tell Ned she’s not pregnant. Hmm… You can’t be a little pregnant and LoCicero, who is pregnant in real life, is far enough along that the bulk will be hard to hide. I’m excited about a little Jerome 2.0 so you have to wonder how Olivia is going to call takebacks on a pregnancy announcement. We’ll all find out tomorrow!

And one last item of interest in sexy soap stud news, Ryan Paevey aka Nathan West revealed on The View that he auditioned to play Christian in Fifty Shades of Grey. Wow, just wow. 50 shades of yes! He didn’t get the part, but I’d pay $2 to see that audition tape, although Paevey swears he didn’t drop trow for the screen test. I prefer to believe otherwise – plus he already has the handcuffs since he plays a Port Charles cop, I’m just saying… (Yum!)

Check back with CDL tomorrow for more “General Hospital” spoilers, news and more inside info on what’s going on in Port Charles!